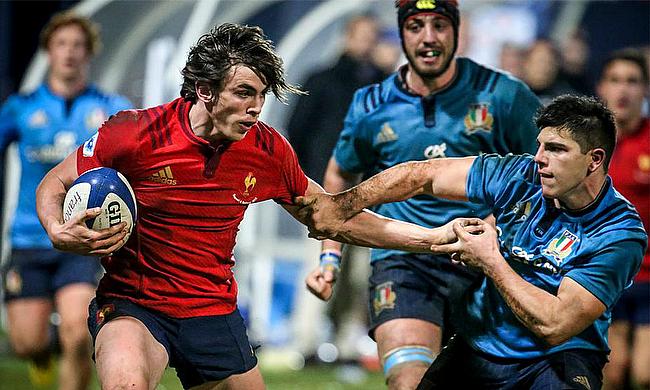 France remain on top in U20 Six Nations
©World Rugby

The U20 Six Nations certainly began with a bang this season.

Perennial powerhouse England fell to a lacklustre 24-6 defeat to Scotland in their opener, whilst Ireland were shellacked by a ruthless Wales side, losing 35-24 on home soil. France completed round one with a comprehensive 40-3 demolition of Italy in Nevers.

France consolidated their position at the top of the table with another impressive victory the following week, defeating Ireland, 34-13, in Narbonne. Wales also maintained their 100% start to the tournament, narrowly edging Scotland in Colwyn Bay, with a late penalty from Billy McBryde snatching them an 18-15 win. The other fixture in Round 2 saw England start to click as a unit, as they swatted aside Italy, 42-7, in Venice. Hooker Jack Singleton was certainly impressive with ball in hand, crossing the whitewash four times in the match.

The tournament, like its senior counterpart, now faces a week off before fixtures resume on the 26th February.

At this point, France and Wales are certainly in pole position for the title but with Scotland impressing and England hoping to welcome back a number of their missing players over the next few weeks, the title is anything but a two-horse race.

Two teams now realistically eliminated from the title conversation are Ireland and Italy. The Italians emphatic defeats to France and England were expected, but the poor Irish performances against Wales and France have come as a surprise.

Ireland’s set-piece has faltered in the faces of the Welsh and French packs, despite the standout performances of highly-touted lock James Ryan. The call-up of Jacob Stockdale to the Ulster first team has certainly lessened Ireland’s threat in the back line and his return in the summer should improve their prospects at the World Rugby U20 Championship.

The positives have been even less for Italy, but number eight Gabriele Venditti has stood head and shoulders above his teammates. The powerful eight’s soft hands and running lines have proven testing for defences to deal with and he may be providing Italian fans with a glimpse into the Azzurri’s post-Parisse future.

Scotland’s performances meanwhile have been a welcome sight to their fans. Their victory over England was their first at U20 level and one of the finest defensive performances you are likely to see at any level of rugby. They acquitted themselves proudly against Wales a week later, but ultimately the losses of Adam Hastings, Jamie Ritchie and Blair Kinghorn to club duty was too much for the side to manage.

Among Scotland’s standouts has been captain Scott Cummings. He has really risen to the fore with both his leadership and on-field performances and the future certainly looks bright for this young crop of Scots.

England’s limp performance against Scotland in the opening round has cast a shadow over their campaign thus far but their set-piece has proven to be as strong as ever. Wasps’ monstrous tighthead Will Stuart has been in fine form, while the introduction of Max Malins against Italy added real cutting edge to the English back line.

Harri Keddie has been a consistent force for Wales in the back row, building on his excellent campaign with the side last season, whilst Keelan Giles has added plenty of threat out wide. Wales will host table-toppers France in the next round before travelling to Bristol to take on England, two games which could well decide where the title ends up this season.

As for France, their pack has been unsurprisingly powerful, whilst Damian Penaud has been bringing his silky skills to the back line to tremendous effect. With a proven finisher like Gabriel N’Gandebe on the outside, France certainly have the ability to win the tournament following their strong start. If they can pull off a result in Wales in two weeks’ time, the Grand Slam could be on for Les Bleuets.

England and Scotland could yet make runs on the title, with both sides still to play France, and the four-horse race for top spot should be compelling throughout, with plenty more twists and turns yet to come.

All in all, this may be the most competitive U20 Six Nations we have seen to date.