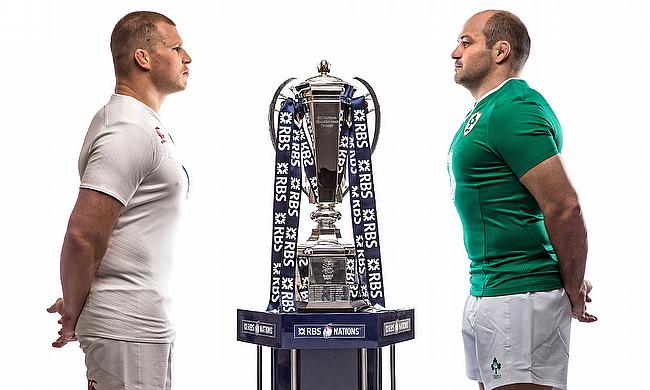 We analyses five talking points ahead of the match.

Eddie Jones has whipped up by a storm between the rival camps by questioning the health of Ireland fly-half Johnny Sexton, who suffered a 'whiplash injury' against France. England could target Sexton, who has an alarming history of concussion, and Jones views that as an entirely legitimate tactic that has "been happening since Adam and Eve were around".

HOW GOOD IS EDDIE'S ENGLAND?

Solid, if unspectacular, victories over Scotland and Italy have provided England's new regime with an encouraging start but Ireland offer a far sterner test than those faced in Edinburgh and Rome. Joe Schmidt's champions are well coached and despite their injury woes - particularly at lock - they are a live threat to Red Rose title aspirations.

Jones has been scathing in his analysis of Ireland's style, stating "they kick 70 per cent of their ball away. It's not the way I think you should play rugby", and has joked that he is preparing to face an Aussie rules team, but it was the same tactics that ended England's Grand Slam quest last year and they will have to deal with the Sexton-led aerial bombardment awaiting at Twickenham.

England's midfield is underpowered, Jones' hand in selection forced by injury to Manu Tuilagi and a lack of in-form alternatives to the Leicester battering ram. In contrast, Ireland will be fielding probably the biggest centre duo in their history in Stuart McCloskey and Robbie Henshaw and how that heavyweight pairing is handled will be key to the outcome.

MARO ON THE RISE

Maro Itoje, one of the brightest prospects in English rugby, makes his full debut amid high expectations. Jones has prevented him from speaking to the media, however, claiming that he has achieved nothing yet. The Saracens lock is strong and athletic and has a good feel for the game, but Jones wants him to develop the "mongrel" in his game.