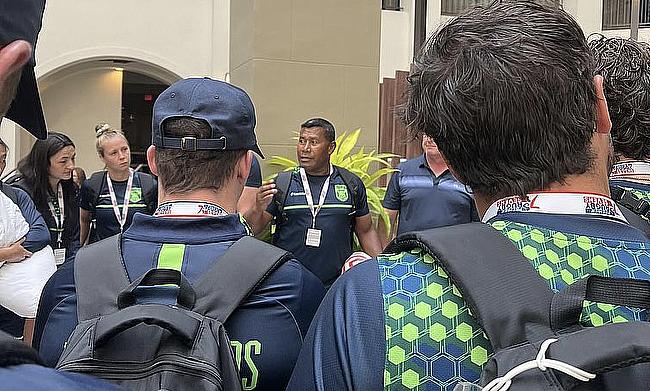 Serevi is splitting his time coaching with Rhinos Rugby and PR7s franchise, the Loggerheads, this summer
©Joe Harvey

To many, Waisale Serevi will always be known as the ‘King of Sevens’. The reasons for this are simple.

Ruling the world in the shortened format of the game, winning seven Hong Kong titles, two Rugby World Cup Sevens crowns and medalling three times at the Commonwealth Games, the 54-year-old’s list of achievements are eye-watering.

But for the past month, I have simply called the former Mitsubishi, Leicester Tigers and Stade Montois back, ‘roomie’.

Staying together in San Clemente, California, where the legend of the game is coaching for Rhinos Rugby, as well as in Premier Rugby Sevens for the Loggerheads, the Fijian and I have become accustomed to one another’s habits.

For example, I will either sleep late or wake up early to surf, whereas 'King' will rise early to pray and watch rugby at all levels whenever he has a spare moment.

Waisea Nacuqu will captain our 7s team this weekend.
Read below for more!!! #duavataveilomanirakavihttps://t.co/prp1zP1miI

He has brought a clutch of players from Jamaica with him to Orange County, while he has at times been mobbed for photos when amongst rugby fans.

There has even been a thought that I should stand close to him to charge $5 for a selfie. Maybe this weekend.

Like me, we are excited about the Commonwealth Games in Birmingham. He has previous in the competition: A beaten finalist in Kuala Lumpur in 1998 and four years later in Manchester before a bronze followed in the next cycle down in Melbourne.

A gold in rugby sevens in the Commonwealth Games is one of the only things to evade Fiji in their somewhat dominant history. Of course, it has been nearly a year since their second Olympic gold while two World Cups, numerous World Games, Oceania Sevens Championships and Pacific Games titles make up their list of honours.

Just four years ago, Fiji went close on the Gold Coast. Making it to the final against New Zealand, the side were helpless in a 14-0 loss with early tries for Etene Nanai-Seturo and Regan Ware doing the damage.

“I know that it was tough for me not to win the Commonwealth Games those years, but I always want Fiji to win. Four years ago, they couldn’t make it, they lost in the final to New Zealand and this week is going really slowly for me because I want to see how the boys do. Hopefully they can do something for the people back home.”

Sitting across a desk, there is a real sense of sadness in Serevi’s eyes when thinking about years gone by and what could have been.

Current coach Ben Gollings has selected a strong side in the men’s competition, with six Olympic gold medallists in its ranks, as well as five players that pulled on the famous white jersey four years ago in Australia.

And their most famous face believes that this can be the case.

“Sevens rugby is something that we in Fiji believe we are good at because of the talent, the skills and the speed that the players have," Serevi said. "It is a big thing and a lot of that comes from the touch rugby we play.

“People are always putting a lot of pressure on so that when they go into a sevens tournament, they need to win, let alone at the big tournaments. The only thing you want is the result. It is always very challenging for Fiji to win every time, and if Fiji wins a medal, that is huge in Fiji.

“We are representing all the people back home, all the people in the village, some who are not working, some who don’t have light, some don’t have enough to eat, and I believe when Fiji wins the medal, everyone leaves aside everything, and we celebrate because the team has won a medal for Fiji.

“I believe we have a very tough team, players that are here to compete and if there is any year that Fiji have the opportunity to win, I think that this is the year because a lot of players have really matured. They have been in the system for four or five years. The core of the squad is there and there are five gold medal winners.

“I believe we have a very strong chance. If we can say at any time before a tournament that Fiji has a chance to win the Commonwealth Games, this is the one because the boys have been training well and Ben has done a great job.

“He has gone to four tournaments, won two of them, gone to a semi-final and another final, which is a really good record for him and he is doing a great job for Fiji. I am really proud of him. He came to Serevi Rugby a few years ago when he was not with England and I said to come out to the camps and show people he was doing things.

“Him and Santiago Gomez Cora [Argentina’s head coach], watching them at Vancouver Sevens, sitting on each bench, it was amazing to see what god has done in their lives. They are really doing well and I believe Ben is doing a good job of getting the team together and selecting a squad of 13 from 23."

The reason for the acknowledgement from Servei is partly because of Gollings' lack of elite coaching before stepping into his current role.

He spent time with Sri Lanka, Singapore, Bond University and in Seattle with Serevi’s rugby academy - Serevi Rugby - but the 42-year-old also had big shoes to fill.

With another Englishman called Ben so heralded in Fijian waters, and Baber’s achievements also monumental to the islands, there was certainly going to be a mountain to climb. Having worked closely with Serevi, it was interesting to find out whether Gollings asked his former employer about taking on the job.

“We were both in Dubai at the end of last year for the World Legends,” Serevi said, grinning. “He was talking about how he had applied for jobs in the USA and Australia, so I said I would apply too.

“Then we applied for Fiji, we applied everywhere. Three weeks later he called me and said; ‘Wais, I got the job’. I was so happy for him. He loves rugby and still plays. Things happen and all you can do is keep moving forward.

“The opportunity for him to coach the Fiji sevens team is huge. I want to congratulate him and wish him well. He is doing a great job.”

For the first time, Serevi will be hoping that it isn't just Fiji who can achieve something in the Commonwealth Games. Recently, the 54-year-old has been at the helm of Jamaica’s sevens side, the team competing on the World Series and they have also qualified for the World Cup in Cape Town later this year.

As a result of his other commitments, he is unable to make his way to Birmingham but is joined by a host of his players in California who are conditioning for the Los Angeles leg of the World Series which takes place at the end of August.

In his absence, it will be former London Scottish and Chinnor attack coach, Ricky Khan, taking charge of Jamaica in the West Midlands where they are pooled with Australia, Kenya and Uganda.

It has been quite a rise for the team who debuted on the World Series just last September. Despite some early humblings from Hong Kong, Great Britain and Ireland, the side rallied to pick up their first win on the second day in Vancouver by beating Chile 10-5.

A week later in Edmonton, it was still tough going, but it was clear there had been growth throughout the group.

They have been present again on the current World Series after complications caused by Covid-19 meant that New Zealand and Fiji couldn’t compete in Spain, so that experience means the side will be more than ready for the challenges that lie ahead of them in Coventry.

“I am so proud of them, and I thank them for the opportunity to coach them on the World Series in September last year,” Serevi said. “It was the first time they had won games on the World Series. I was so happy for them and then they asked me to go to the Bahamas for World Cup and Commonwealth Games qualifiers.

“They qualified and now they are about to compete in those events. I am so happy and excited to see the boys. They have a lot of very good players. A lot of them are based in the UK and some from the islands.

“I would not be surprised if they win games, maybe one or two. They are there to compete. They know how important it is to be there, to show that they are capable of playing that level of competition.”

Fiji are pooled with Canada, Wales and Zambia and kick-off their 2022 Commonwealth Games campaign on Friday morning against Zambia at Coventry Stadium.