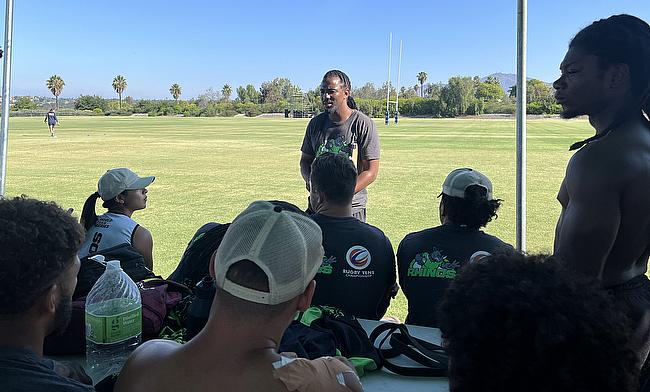 It was at the 2014 Commonwealth Games that Cecil Afrika made some of the greatest memories of his career.

Then 26, you could argue that the playmaker was at the peak of his powers, with the team around him ready to reach the highest of heights too.

Playing alongside the likes of Frankie Horne, Kyle Brown, Seabelo Senatla, Kwagga Smith and Werner Kok, South Africa flew through their group before overcoming the host nation, Scotland, and Samoa on the way to the final against New Zealand at Ibrox Stadium.

Scoring a try that afternoon, Afrika perhaps unsurprisingly ranks that achievement all those years ago amongst his very best but as much as the gold medal was an astonishing feat, the opportunity to be his country’s flag bearer at the opening ceremony was another honour that he wasn’t expecting.

“That was probably the highlight of my whole, entire career,” Afrika said. “Being a flag bearer for South Africa at the Commonwealth Games was something special, and then we managed to win the gold medal which was something quite special for us as a team.

“The lead up to that tournament was quite special for us as a group, being in Scotland, in Glasgow, preparing for the tournament. There was a lot of things happening off the field which I think actually brought us together as a team, made us successful and we managed to win the gold medal.”

Handed the flag which he paraded with such pride by the now President of South Arica, Cyril Ramaphosa, it was an honour which, by the look of Afrika’s eyes when he tells the story, he still can’t seem to grasp.

“A kid from Port Elizabeth, grew up in Missionvale, played the game of rugby on the street and now the flag bearer for Team South Africa, that was something I was most definitely proud of. I believe my family also are too.

“Not one of us thought I would be at a Commonwealth Games and be the flag bearer for South Africa. If you dream big and you are willing to achieve it and sacrifice and work hard for it, then you can achieve anything you want to in life.”

When regaling these tales, he is sat on the edge of the sofa in the southern California apartment the two of us share with three others. What people never really talk about is how Afrika is a sports obsessive.

Much of his spare time is spent looking back at old games - which he can virtually recite play for play verbally - or watching the World Championships that have been taking place in Oregon on his mobile phone.

Speaking about the 2014 Games, Afrika’s ability for recall is as strong as ever. There is a brightness to the way he speaks when reflecting on those things ‘happening off the field’ which he touched on earlier, as he and his teammates secured their legacy as legends in South African rugby just a year on from winning the World Games in Columbia.

“Guys were coming from 15s, we had to speed them up in terms of what was the plan, how we are doing things, our culture and our values,” Afrika explained. “That brought us close together as a team when we had meetings and discussed our plan.

“Then there was training, defensive sessions and there were two instances where guys almost fought because of how intense training was and how competitive our sessions were. I knew then and there that this was going to be a special tournament for us because you could see how everyone wanted to add value to the team to be successful.

“I think also what brought us so close was that there was only about seven guys who had played together that whole season and there were other guys coming in. We were the guys who enforced what we wanted to achieve for the weekend and we managed to win gold.”

If it wasn't for a global pandemic, Afrika would have no doubt called time on his glittering career in Tokyo at the 2020 Olympic Games but with the competition taking a place a year later than planned, it meant the fly-half instead found his way to Major League Rugby and the San Diego Legion to see out his professional playing career.

He will still be turning out for Monaco in the SUPERSEVENS Rugby competition in France from August to November, but now his focus is largely on coaching. Recently engaged also, Afrika says it was at these one-off tournaments that he played his best rugby.

That is difficult to disagree with considering he has an Olympic bronze medal from 2016 to his name to go alongside his 2014 Commonwealth gold.

“Most one-off tournaments were where I played my most exciting and best brand of rugby or where I felt like I expressed myself the most,” Afrika said. “Because you only get that one opportunity in every four-year cycle, you don’t know if you are in that four-year cycle again.

“I was blessed enough to play in the 2016 Olympics and that was possibly one of the best tournaments I have played and 2014 also, where we won Commonwealth gold. Then in 2016, we won bronze.

“I have felt like in the one-off tournaments I have really enjoyed myself and expressed myself the most because you only have that one opportunity to perform. I believe, in the World Series, you have two tournaments in a row, then you have another three or four weeks, then another two tournaments.

“Subconsciously you feel like ‘if I don’t do well this weekend, next weekend I have another opportunity’. At the one-off tournaments, you only have that one opportunity. You have got to do well, and I feel like for me, personally, I did really do well.”

In the very brief 2021 World Rugby Sevens Series season, South Africa ruled the roost in the men’s competition. Ronald Brown was the leading points scorer, while Muller du Plessis was the top try scorer as the Boks romped home to a title thanks to their exploits in Vancouver and Edmonton, Canada.

So far in this campaign, it has been something of a mixed bag. Neil Powell’s team were the victors in Dubai across two weekends, the same in Malaga and Seville, but as soon as New Zealand, Fiji, Australia and Argentina were brought into the mix, it has been tough going.

Add to this some fairly heavy squad rotation, and Afrika believes that just like in 2014, the squad must band together quickly to have any form of success in Coventry this weekend.

“Continuity in team selection also plays a massive role in understanding and execution of plans,” he said. “If I look at the last four tournaments, we had different sides.

“Not just two changes, but four, five or six in very important positions, so the biggest challenge is going to be how they can function as a group as quickly as possible. Other teams, for argument's sake, Australia, New Zealand, Samoa, England, those teams, have been in good form as of late.

“There is a lot of new guys [in the South Africa side], but now they understand how things operate on the World Series, what kind of intensity they need to improve on. We are not there yet, but our structure and our plan can help us.

“It is a bit about the players on the field executing the plan. Continuity in team selection and combinations is of the upmost importance, not just for the Commonwealth Games, but also for the World Cup and leading into the next season also.

“There is a Commonwealth Games coming up now, there is also a World Series title up for grabs and a World Cup. It is quite interesting and exciting. The World Cup is in South Africa, and we would love to win a gold, but hopefully we will find our stride at the right time and in the right place.”

Pointing out Selvyn Davids as a player to provide a real point of difference, as well as being one to have potentially suffered from the squad rotation, it seems like, as ever, South Africa are in with a shout of ending their time in Birmingham on the podium.

That said, there is plenty of danger elsewhere. New Zealand have shown their depth with their selections and lengthy injury replacement list, while England, Scotland and Wales have the added motivation of players vying for limited Team GB spots ahead of the nations competing as one to help promote greater competitiveness at the Olympic Games for the years to come.

This is even before mentioning Fiji, who again won gold at the Olympic Games not so long ago and have selected strongly for this next shot at a medal, while Australia are quiet underdogs with a squad that includes Nick Malouf and Samu Kerevi.

All of this means that Afrika struggles to answer the question of exactly who will be happiest on Sunday.

“I have to say South Africa,” he said. “Teams like Australia are in red hot form right now, New Zealand, Fiji and England also. England have been playing some good rugby as of late, the guys have been firing, so I would say those are the top teams to look out for.

“Samoa also. Let’s not count out Samoa. They have been physical, they have been fast with new, exciting young guys, so they can also be a team to look out for.”

South Africa are pooled with Scotland, Tonga and Malaysia, and will kick off their 2022 Commonwealth Games against the latter on Friday at Coventry Stadium.