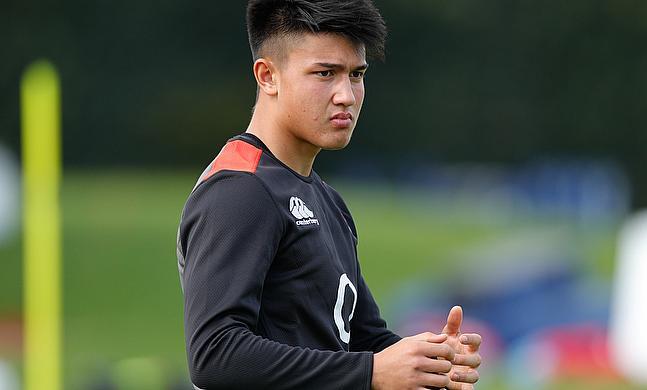 Marcus Smith impressed on his debut for England at Twickenham
©PA

There were plenty of positives for both sides as England overcame the USA in West London.

Tries rained in from Joe Cokanasiga, Harry Randall and Marcus Smith, whilst Gary Gold’s USA gave a good account of themselves too. Only having arrived in London earlier this week, the North Americans scored four tries ahead of travelling to Dublin to take on Ireland.

Here is how the game panned out…

Whilst the scoreline was heavily in favour of the USA at the conclusion of the game, much like their North American counterparts in Cardiff the day before, the USA scored first.

The points were an ample reward for the bright start that Luke Carty and his teammates had, the former Connacht fly-half taking the bold decision to go for the posts dead on halfway, the LA Giltinis man splitting the sticks on debut after David Ainu’u won a penalty at the scrum.

But those positive opening exchanges for the USA were quickly forgotten with England’s opening try from the restart. Marcus Smith’s restart sailed past the USA pods into the hands of Max Malins who offloaded to Sam Underhill, the Bath flanker powering over from short-range.

Taking a tumble in the process of his assist, Max Malins was replaced shortly after, Jacob Umaga going into the midfield and Ollie Lawrence onto the left wing. Two minutes after that shake-up, Lawrence barrelled over for his country, the Worcester Warriors man having the pride of his efforts somewhat ruined by Mike Te’o’s last ditch attempt at a tackle that pulled the scorers shorts down.

Joe Cokanasiga then scored a double for England, the first thanks to the quick thinking of Harry Randall and Henry Slade and the second as a result of a careering run from the Wing that saw him break through the USA defence with ease.

No more tries came before the break, but there were a couple more changes, with Lawrence having to depart the field after a frustrated challenge from the youngster resulted in a head clash between himself and Marcel Brache resulted in both players coming off, Dan Robson lining up on the wing for England and Christian Dyer taking to the field for Gary Gold’s team.

Much like in the opening 40 minutes, the USA took advantage of an England team that were a little behind the curve. Carty again was the architect, a superb kick giving excellent field position to his team, the resulting maul seeing Old Glory DC’s Jamason Fa'anana-Schultz bundled over the whitewash.

After nine minutes with not much between the sides, England gained some good territory of their own. Jamie Blamire initially gave away the ball at the lineout, but made up for his error by charging down Ruben de Haas’ box-kick and dotting down with a defender wrapped around his waist.

Cam Dolan’s try was scored in a similar vain, the former Northampton man rushing Harry Randall. Again, each side had their positive moments, but after trying a little too hard in their own half, England had a scrum 5m out and following a snipe from Randall had Marcus Smith scoring a debut try.

Bristol’s scrum-half then got in on the action himself, breaking away from a rugby and throwing a dummy that have him the freedom of West London to score underneath the sticks.

The set-piece had been one of the USA’s biggest positives the entire afternoon and was in use again for Hanco Germishuys’s try, in what was virtually a carbon copy of Fa'anana-Shultz’s try a little earlier.

England thought they had another briefly after, however when Lewis Ludlam’s try was struck off for Joe Cokanasiga taking Te’o in the air, a burst from Utah’s Mika Kruse resulted in a try for Christian Dyer.

Coming into this game, it was uncertain what actually qualified as a positive result for England.

They were expected to win from the outset, but a whitewash would have meant that the opponents weren’t up to much and grinding out a result under difficult circumstances against this USA team would have resulted in headlines saying that this new crop of players weren’t good enough.

?? "It’s a great day for the sport and for the young talent of England.”

Read Eddie Jones' post match thoughts after on debutants, the performance and being back at @Twickenhamstad ?

For periods, it was clear that there was some inexperience amongst Eddie Jones’ ranks and a lack of fluidity between the players meaning at times it was hard work breaking down an opposition in the USA who only got together in their entirety on Tuesday.

With a dozen players making their debuts for England, Jones says that regardless of a patchy performance, the experience will only benefit the players in the long run.

“The first-half, we were very good, we put ourselves in the position to win the game which is the most important thing first of all,” Jones said. “Then in the second half we got a bit loose, a bit inconsistent and dropped off in a number of areas.

“A lot of new players have had a taste of Test rugby now, and now it's about how hard they want to work to keep improving.”

It is also likely that the injuries that cropped up across the fixture meant that England were unable to play the game they wanted. The loss of Max Malins was manageable, Jacob Umaga more than capable option at centre.

Ollie Lawrence was not exactly in position by being put on the wing, but when the Worcester centre was forced to leave the field, Dan Robson’s inclusion on the wing meant that both of Harry Randall and Marcus Smith would have to play the full 80.

As for the USA, their performance was impressive given their time constraints. Plenty of players were representing their clubs in Major League Rugby at the weekend, some wrapping up Top 14 seasons, the odds stacked against them as a result of this.

Added to this, three coaches trying to get their thoughts across in a short training week, the Eagles won nine of their scrums, as well as 11 lineouts, seemingly surprising England on a few occasions with their tries, two coming directly from the set-piece.

Their performance declining as the second half went on, Gary Gold says that overall he was pleased with the teams’ efforts going into an encounter with Ireland next week

Place a bet with best USA online casinos and enjoy the Eagles at the same time.

“Chris Wyles, Rob Hoadley and Neal Hatley were absolutely next level and they have a huge amount of experience,” Gold said.

“I think we have spoken about in the build-up, and one of the things is through absolutely no fault of anybody, I still don’t think like we are fit enough as a group yet and we wouldn’t be because we don’t play this level of team this regularly and the more we get these opportunities the fitter we will become.

“I think our fitness fell off a little bit and we started off well at scrum time and then we really did fall off. The areas I was pleased with was that the lineout functioned relatively well, again, we came up against a very good lineout and I knew that Charlie Ewels would run a very good lineout as well.

“By and large I think our collision work was good in the contact and I think when we did hold onto the ball in slippy conditions, we were able to score some tries and that is very exciting. To put nearly 30 points on England is no mean feat at Twickenham.”

Enjoy your rugby this summer and also enjoy casino machine a sous at the same time!