USA 7s and their rise to the top 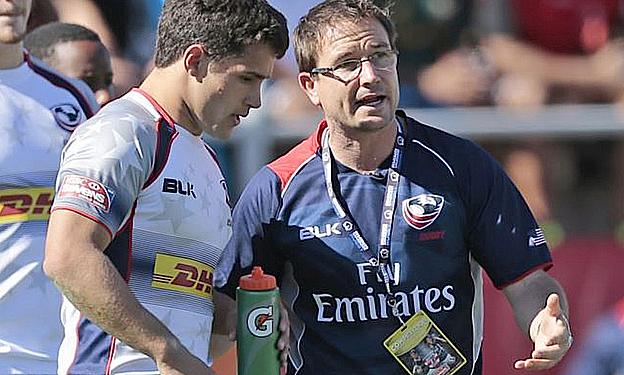 Current USA Rugby 7s coach Mike Friday feels that his side have silenced the critics after achieving their most successful Rugby 7s season in USA’s history.

USA won their first ever World Series event in London back in May and also qualified for the 2016 Olympic Games in Rio after winning the NACRA Men's Sevens Championships last month.

“Its been fantastic and hugely rewarding,” said Friday. It was a tough assignment to take on around 12 months ago. We were staring down the barrel of relegation and the statisticians had written us off in America.

“They had given us a 10 per cent chance of qualifying for the Olympics, so to get to where we have got to in such a short time is testament to all the hard work from the boys.”

USA will compete for medals in Rio next summer which Friday believes is key in continuing to help rugby’s popularity increase across the pond.

“For us to qualify for the Olympics is a game changer.

“You can’t play some of the super sports NFL and Baseball, so for the boys to be able to showcase their talents at the Olympics and show the American sports fans about rugby, will touch so many more people.

“If we continue on this pathway of development and success, then we will be more embraced by the American sporting public which is great news for the world of rugby and American rugby.”

When Friday took the job he knew if the USA were to be successful, then things would have to change in US Rugby.

The former England 7s captain wanted to change his players approach to 7s rugby across different aspects such as physical conditioning and their mentalities.

And now, slowly but surely, Friday and his side are starting to see that this change is being rewarded.

Friday added: “In terms of the potential and capability USA Rugby has, it needed to compete with the so-called super rugby powers in the shortened game because the huge technical parts of the game have been taken out.

“For us as a team, we did have to rebuild the foundations of the technical parts of the game and we also had to educate them both in the classroom and on the pitch to understand the tactical part of the game.

“What has always been thrown at the Americans is that they are driven by their own individual stats so we had to change the mentality of the players to put the team first and that has probably been the biggest landmark change this season.”

Friday, who has coached Kenya 7s and England 7s in the past, believes that USA’s sixth place finish in this year’s World Series will be a perfect stepping stone on the way to the Olympics.

He also hopes that some of the side representing the US at this autumn’s World Cup can be part of the historical summer for US Rugby 7s in 2016.

“I’m a big believer that rugby is rugby whether there are seven players on the pitch or 15, he explained.

“7s is very much seen as part of a player’s development if they want to be an international XV’s player and we will fully support them that way.

“We have already seen four or five move across to be in the USA Eagles squad for the World Cup this autumn so that is testament to how our program is connecting with the XV’s program.

“I am also hopeful that a couple of them will want to try their hand to see if they are capable of transferring to 7s the other way. There is a myth that once you’ve gone to XVs you can’t come back.

“If you have the mental attributes and are prepared for the physical condition adjustment, then as long as you have played 7s, understand how the game works and are a good rugby player; then you can move between the two. It will be interesting to see what transpires after the World Cup."