Up and Coming Stars - Back row and half backs 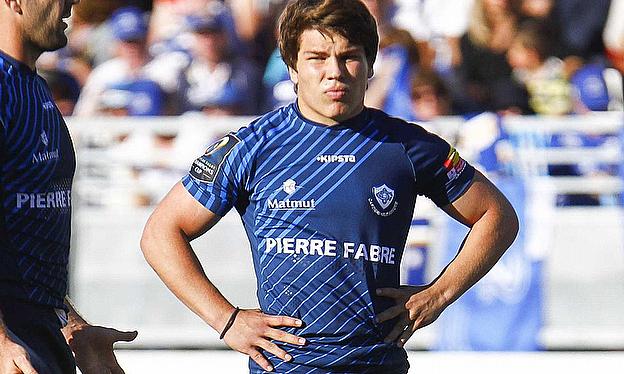 Welcome to the second of our latest series looking at rugby’s most exciting up-and-coming stars, this week focusing on the back row and half-backs.

As we said in our look at the front and second rows, established players will not be mentioned, as the intention is to highlight the players that everyone will be talking about in a year or two’s time. As such, only players 20 years or younger are included and though the likes of Sean McMahon and Handré Pollard miss out under these guidelines, there are plenty of names to get excited about moving forward.

Richard Mariota, Counties Manukau and Samoa
The dynamic ball carrier was a revelation at the 2014 Junior World Championship in New Zealand, demonstrating a fine a balance of strength and speed as he helped keep Samoa competitive in many of their games. He has also played lock regularly at age-grade level and has the size and mobility to succeed at either lock or blindside at the next level, or even potentially at number eight should he decide to go down that route.
Mariota was rewarded for his fine displays last season with the Counties Manukau Under-20 player of the year award and will be targeting more exposure with their first team this coming ITM Cup season. Until he pulls on the blue of Samoa at senior level, speculation will continue to be rife that he could opt for the All Blacks, should they come a-calling.

Charlie Beckett, Leicester Tigers and England
A graduate of Merchant Taylors’, the same school which produced Tigers legend Ben Kay, Beckett is a powerful and abrasive blindside flanker that has already shown shades of James Haskell early in his career. He looks like a man amongst boys at time at U20 level and uses that physical advantage to maraud his way around the pitch, often dragging tacklers with him.
For as much as the previous few England U20 classes have been lauded, it has been noticeable that the back row forwards have failed to make the early impact that many of their colleagues in different positions have, with the possible exception of Jack Clifford. Beckett could change that trend if he continues to impress in Leicester’s academy, as incoming coach Aaron Mauger will be keen to inject some fresh impetuous into a side that has struggled this season, at times looking bereft of direction and ability.

Sekou Macalou, Rugby Club Massy Essone and France
Macalou, a versatile flanker comfortable on either side of the scrum, is already very well-polished despite still being just 19 years of age and has starred for both France U20s and Massy in recent times. He regularly starts for Massy in Pro D2 and though they are currently struggling near the foot of the table, none of that is attributable to the fine job that Macalou has done for them this season.
A move to the Top 14 surely beckons for Macalou in the near future, though he should be careful to avoid a permanent role as a backup in one of the more talent-rich French sides. With the likes of Thierry Dusautoir and Yannick Nyanga approaching the end of their international careers, Macalou has picked a good time to start making a name for himself.

Lachlan Boshier, Taranaki and New Zealand
The validity of this article would probably be called into question without a budding openside flanker from New Zealand in the mix, so right on cue, enter Boshier. Thanks to a certain Richie McCaw, Kiwi opensides are held to a different standard to those who hail from other parts of the world and though it’s still early days for Boshier, he looks to be a player gifted with abundant talent and ability.
He starred at the JWC in his native New Zealand last season and although the Baby Blacks struggled in general in the competition, Boshier’s work at the breakdown was as good as anyone’s at the tournament and helped ensure that they at least finished third overall. The mantle of McCaw’s successor looks to be the prize at the end of a race between Sam Cane, Ardie Savea and Matt Todd, but with those three fighting it out for the prized All Black seven jersey, don’t be surprised to see Boshier make up ground on the outside over the next few years.

Other players to watch

Though there have been no Celtic representatives so far, Ireland’s Dan Leavy (Leinster) and Scotland’s Jamie Ritchie (Edinburgh) are anticipated to make big impacts at the next level, the latter of who has experience captaining Scotland at both U18 and U20 level, as well as making his Pro 12 debut this season.
In England, the Northampton Saints’ academy continues to produce talented player after talented player, with back row forwards Lewis Ludlam and Will Allman amongst the pick of the current academy crop. Truro College (who produced Jack Stanley, featured in last week’s look at the tight five) have also developed another budding star in Declan Matthews (Exeter Chiefs), who has impressed in the Aviva Premiership Academy League this season.

Antoine Dupont, Castres Olympique and France
The young scrum-half was a revelation for Castres when he made his European Rugby Champions Cup debut against Harlequins, providing them with a spark and urgency that they have been lacking all season. He is not only a livewire who can break a game open with a darting run, but also a precise passer and an accomplished box kicker, capable of controlling a territory-driven game.
With Castres sitting in a precarious position at the foot of the Top 14 table, opportunities for playing time may be limited this season for Dupont, but a season in Pro D2 next season could be the making of Dupont, who would undoubtedly see more playing time in the second tier. The Rory Kockott experiment has not worked for France, whilst Morgan Parra, for all his ability, seemingly struggles to impress Philippe Saint-André and it would not be surprising to see the French nine jersey continue to be shared amongst a few contenders until Dupont breaks through.

Curwin Bosch, Eastern Province and South Africa
A Craven Week Player of the Year winner, a highly-respect award for age-grade players in South Africa, Bosch is a versatile fly-half who also has experience playing at full-back for the South Africa U18 side. He follows in the footsteps of the equally exciting prospect Sergeal Peterson, who also won the award and graduated from Grey High, a well-respected rugby school in Port Elizabeth.
The fly-half situation for South Africa is particularly healthy right now, with Pollard seemingly set to make the jersey his own for years to come, whilst the talented but injury-prone Johan Goosen provides very accomplished backup. Dislodging either of these two won’t be easy for Bosch, but that’s a long way off for the fly-half, whose primary goals should be making an impact at Currie Cup and Super Rugby levels. That said, the Sprinboks are strong advocates of the theory that if a player is good enough, then he is old enough, so keep an eye on Bosch, he could be making waves sooner rather than later.

Ross Byrne, Leinster and Ireland
If Ireland didn’t already have an extremely accomplished incumbent in Jonathan Sexton, the excitement levels around Byrne would be much more noticeable. He is an extremely talented fly-half and seemingly combines all the positive aspects of Ireland’s current contingent of backup 10s. He has the game-management and composure of Ian Keatley, the silky distribution of Ian Madigan and the dynamic running threat of J. J. Hanrahan.
Admittedly, all of these skills have only been seen thus far at age-grade level, but at that level he has already outplayed Super Rugby regular Simon Hickey at last year’s JWC and he is such a complete  player that he should translate well to senior/provincial rugby when called upon. Sexton has plenty of years ahead of him, but with Byrne emerging and continuing to develop, Irish rugby fans should have little fear for the post-Sexton era, with the youngster looking set to have a very bright future indeed.

Other players to watch

New Zealand’s Josh Renton (Otago) was unlucky not to get a more significant mention this, as, like Boshier, he was one of the more impressive Baby Blacks at the JWC last year. A dynamic scrum-half, look for Renton to make the leap to Super Rugby in the near future.
A bit of a wildcard here, but Georgia’s scrum-half Vasil Lobzhanidze has been making an impression on people with his appearances for the senior national team and it could be just a matter of time before he follows in the footstep in many of his countrymen and ends up playing his rugby in the Top 14.
There’s an abundance of talented fly-halves emerging from schoolboy to U20 level right now, including Scotland’s Gregor Haldane and England’s Harry Mallinder (both Northampton Saints), as well as Aviva Premiership Academy League-winning standoff Max Malins (Saracens).
Argentina’s great new fly-half hope, Patricio Fernandez, rounds us off nicely and will look to build this year on the two caps he already has to his name (admittedly against Chile and Brazil). With Fernandez likely to enjoy significant exposure with the Pumas, Clermont Auvergne and (presumably) Argentina’s Super Rugby side over the coming years, look for him to be one of the stars at the 2019 Rugby World Cup, as he certainly has the talent to take the world by storm.