Up and Coming Stars - Front and Second Row 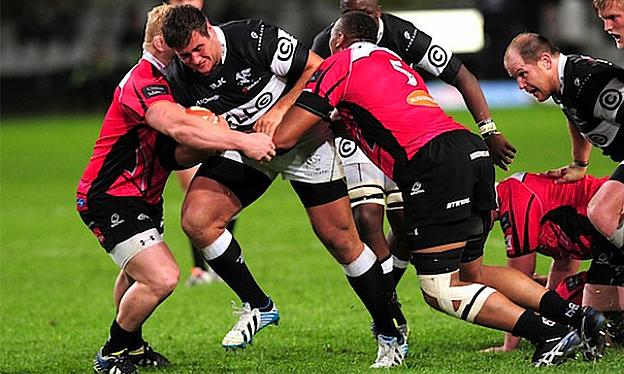 Thomas du Toit has been impressive for the Sharks
©PA

Welcome to the first in three-part series for Talking Rugby Union, identifying and highlighting the best up-and-coming talent in the rugby world.

Handré Pollard. Maro Itoje. Sean McMahon. Even at just 20 years of age, these three have become household names across the globe and are already well on their way to becoming the game’s next generation of superstars. This is common knowledge however, and over the next three weeks will look to dig a little deeper and unearth the players looking to follow in their footsteps over the next few years.

Given that players often flit between positions at this stage of their career (all players are 20 years of age or younger), we have decided that rather than splitting them up into individual positions, we will look at them under slightly broader categories. Up this week are the front and second row standouts:

Thomas du Toit, Sharks and South Africa
The powerful prop, who packs down at loosehead currently, was one of the key reasons that South Africa made it to the final of the 2014 Junior World Championship. His scrummaging was more than a match for almost everyone he came up against, until a highly-anticipated contest with England’s Paul Hill in the final ended very evenly.
He was also given his first exposure to Super Rugby last season, making four appearances for the Sharks, and should go on to make even more this season, especially with an eye on keeping Tendai Mtawarira fresh for the Rugby World Cup this year. Keeping du Toit in South Africa must be amongst the highest priorities for the SARU, whilst keeping him in Durban will be just as important for Sharks’ CEO John Smit.

Malcolm Marx, Lions and South Africa
Trying to force Robbie Coetzee out of his starting role with the Lions, not to mention the illustrious duo of Bismarck du Plessis and Adriaan Strauss with the Springboks, are unenviable tasks, but both are goals which should be in Marx’s short-term ambitions. He started in the Lions’ 22-8 loss to the Hurricanes this past weekend and despite the result, showed he is more than ready to feature at this level, arguably outplaying All Black Dane Coles.
He is typically astute at the set-piece, as you would expect of any South African hooker, but he also brings physicality and intelligence to his loose game that is a result of time spent playing in the back row earlier in his career. Usurping two of South Africa’s best players ahead of the RWC is a tough task, but Marx is ready to take the game by storm.

Jack Stanley, Exeter Chiefs and England
Standing 6’ 1” and weighing in at just over 20 stone, Stanley is a name that everyone should get to know well over the next decade. Stanley, a product of Truro College, represented the England U18 side last season with distinction and has gone on to make his debut for the Chiefs since, bringing his considerable frame to the LV= Cup.
We’ve seen many larger props struggle with the new engagement sequence at the scrum, but Stanley is young enough to be playing his formative rugby under the new rules and he should hopefully face none of the struggles that we have seen from some  of the veteran behemoths. Regardless of your opinions on the quality of the LV= Cup, starting at tighthead in the competition at the raw age of 18 is quite an achievement.

Taniela Tupou, Queensland Reds and Tonga
From one colossal 18-year-old prop to another, Tupou, or ‘Tongan Thor’ as he is also known, became an overnight sensation when a video went viral of him storming his way through beleaguered tackler after beleaguered tackler in a school match. Interest in the dynamic prop was high before that however, with clubs in New Zealand, Australia, England and France all chasing his signature, but ultimately Tupou plumped for the Reds, thanks to his desire to represent the Wallabies in the future.
Tupou now faces the challenge of stepping up from Sacred Heart College, Auckland to the demands of the National Rugby Championship in Australia and providing that transition goes to plan, Super Rugby awaits the big Tongan.

Other players to watch
England’s trio of Daniel Hobbs-Awoyemi (Northampton Saints), Seb Adeniran-Olule (Harlequins) and Paul Hill (Yorkshire Carnegie) all have very bright futures, whilst it would also be advisable not to sleep on Scotland’s Zander Fagerson (Glasgow Warriors).
The sky could be the limit for New Zealand’s Tau Koloamatangi (Waikato) if he can become a more consistent scrummager, whilst Wales’ Leon Brown (Newport Gwent Dragons) is worthy of keeping an eye (or two) on.
Camille Chat (Racing Metro 92) is an exciting talent at hooker for France and will be quick to capitalise on any opportunities that come his way, especially with Christopher Tolofua failing to live up to his early billing as of yet.
At U18 level, Lupumlo Mguca (EP Kings) is a dynamic front rower to take notice of, after impressing in the annual U18 tournament between South Africa, England, Wales and France hosted in South Africa last season.

Guido Petti Pagadizábal, San Isidro Club and Argentina
Having already represented Argentina twice at senior level, Petti doesn’t quite fit the guidelines of this article, but he is already a tremendous player that not enough people know about. The lock is amongst a crop of exciting young Argentinean players that have the capability of equalling the success the Pumas’ golden generation of 2007 achieved and possibly even surpassing it.
His development will all but certainly be sped up by the arrival of Super Rugby in Argentina from 2016 onwards and he could well be one of Argentina’s most important players by the time the 2019 RWC in Japan rolls around.

Cameron Skelton, Waikato Chiefs and Samoa
The younger brother of Will Skelton, Cameron is actually eligible to play for New Zealand, the country of his birth, Australia, where he currently studies, or Samoa, whom he represented at U20 level at the 2014 JWC. Monstrous doesn’t quite do Skelton justice, as the 19-year-old lock is over 6’ 9” and weighs in at a whopping 24 stone. To give that some perspective, Skelton is already bigger than France’s Uini Atonio.
The physical talents are there for all to see and Skelton’s biggest challenge will be dealing with the expectations that they have placed on him at such a young age. If he can keep ahead of the media-driven curve and continue to develop the technical side of his game, then the world could be his oyster.

Charlie Ewels, Bath Rugby and England
Ewels follows in the sizeable footsteps of the aforementioned Itoje, not only taking on his place in the engine room of the England U20s, but also assuming his role as captain. The lock has been catapulted into the limelight not only by his achievements at age-grade level with England, but also his senior experiences with Bath in the European Rugby Champions Cup and LV= Cup.
Making your senior debut at 19 years of age is a special enough achievement on its own, let alone doing it in European rugby’s most-prized club tournament against the likes of Thierry Dusautoir and Imanol Harinordoquy. Ewels acquitted himself well filling in for Bath’s injury-ridden back row, but it’s in the engine room that he will make a name for himself, starting this summer when he will likely lead the England U20s in their search for a third consecutive JWC title.

Other players to watch
South Africa’s RG Snyman (Bulls) is an absolute monster and should be the next lock off the conveyor belt that starts in the Highveld and seemingly delivers incredible talent at the position to all corners of the rugby-playing world.
Wales U20 captain Rory Thornton (Ospreys) is another player well worthy of attention and has been rewarded with a number of appearances for his region thanks to impressive displays at club and age-grade level.
Tristan Labouteley (Montpellier) is perhaps the best French prospect at the position since the once highly-touted Pascal Pape made his breakthrough and also warrants attention.
The final prospect is New Zealander Geoffrey Cridge (Hawke’s Bay), who impressed at the 2014 JWC and could be fast-tracked into the Hurricanes’ set-up when Jeremy Thrush leaves for Gloucester at the end of the 2015 Super Rugby season.

We hope you’ve found this selection illuminating and useful and if so, make sure you join us next week when we will be running the rule over the next generation of back rowers and half-backs.