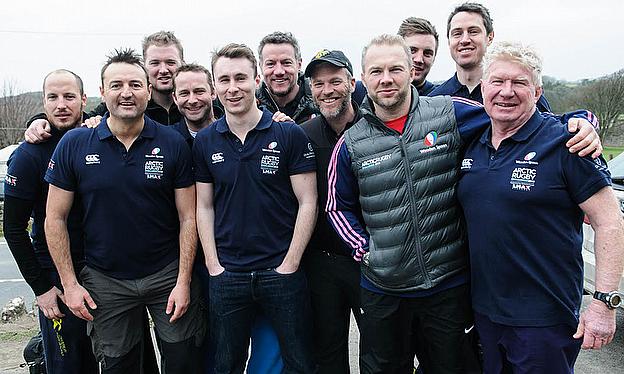 The Arctic Rugby Challenge sees ten men, led by former Rugby Union Internationals Tim Stimpson and Ollie Phillips, trek to the Magnetic North Pole where they will be aiming to set a Guinness World Record by playing the northernmost game of rugby.

Former England and British & Irish Lions player, Lee Mears will join the teams as match referee. Through the expedition the Arctic teams are hoping to raise £300,000 for children’s rugby charity, Wooden Spoon.

The teams will depart on 15th April, beginning their journey with a flight from Resolute Bay, Canada to within walking distance of the pole. From here, the team’s route will depend on the conditions they encounter. The next month will be spent preparing themselves for bitter winds as well as the possible problems of open water and polar bears.

The journey will finish with the game of rugby after which the challengers will be picked up by an aircraft and returned to Resolute Bay.

Comments Arctic Rugby Challenge adventurer, Ollie Phillips: “The Arctic Rugby Challenge is a unique and exciting adventure and we are currently in the process of preparing ourselves for the conditions we will encounter. I think it’s only just starting to dawn on the guys how big of a challenge this is actually going to be however, we’re determined to take on the North Pole to raise as much money as we can”

About the Arctic Rugby Challege

This April, 10 men will trek 100 miles in the Magnetic North Pole to set a Guinness World Record and play rugby at the northern most past of the word. Led by Tim Simpson (England and Leicester Tigers) and Ollie Phillips (England 7s and Gloucester winger), the teams are aiming to raise £300,000 for Wooden Spoon. Donations can be made by texting ARCT01 £2, £5 or £10 to 70070. You can keep up to date with the team’s news by visiting the website www.arcticrugbychallenge.org, following them on Twitter @wsarcticrugby or via the Facebook page www.facebook.com/arcticrugbychallenge