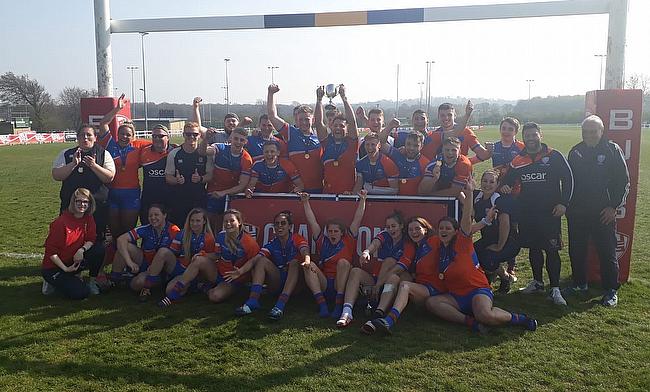 Rob Jones would have been sporting a beaming smile in Leeds last week, but he admits he was surprised by Manchester Met’s success at the BUCS 7s.

The head coach of MMU’s Men’s side saw his team clinch the BUCS 7s trophy and the Women’s squad also picked up silverware in Yorkshire.

However, with the Men’s outfit preparing to compete in the North B play-offs in the XV a-side game as well as a depletion of the Women's team before their triumph at West Park Leeds RFC, Jones revealed it was a superb outcome, but not one he had initially expected.

“We [MMU’s Men’s team] turned up and I think people were highlighting that we could mount a challenge and that we were one of the favourites because we have reached finals in the past,” he said.

“Did I think we were? It’s an odd one because we probably had the least preparation we have had in the last three years due to the play-offs.

"We literally had about a session and a half working on the 7s. I did make a conscious decision to barely focus on 7s so that’s probably why we won!

What a start to the sevens season ????

Who will take the crown in two weeks time ??? pic.twitter.com/edIolsu74R

“In terms of the Women’s, I remember saying to my boss Jerome Read who is Head of Performance, that they were looking sharp and clicking. We have got some cracking players in our Women’s group who play at Firwood Waterloo and in the Tyrrells Premier 15s.

“We actually went into the tournament with nine players because we ended up having a couple of illnesses. That was probably another reason to be surprised we did so well!”

MMU’s women defeated Bournemouth in their final whilst it was fourth time lucky for the Men’s team as they gained their revenge on 2018 winners Durham University.

Jones’ men had fallen short in the three previous finals and despite their lack of preparation for the trophy tournament this time around, he was full of praise for his side.

“The guys have remained in really good shape and there is a great spirit across the group,” Jones added. “They really enjoy the 7s, but it is a long day! We played six games and there was only a 20-minute gap between each game so it was brutal!

“We did have a brief look at all the key elements to 7s and we focused particularly on the breakdown. That really helped us and I don’t think we conceded a turnover all tournament. It was exceptional and apart from the first game, our discipline was exceptional too.”

With MMU not able to compete in the BUCS Championship 7s competition, which takes place next Wednesday, all focus returns to their upcoming playoffs ties.

The North-West institution have the chance to gain promotion to North B if they can get the better of Scottish 1A side Heriot-Watt University and Midlands 1A champions, the University of Leicester.

MMU begin with a trip to Leicester on May 1st before hosting Heriot-Watt, but having known their opponents for over a month, Jones admits the wait to commence the play-offs has been frustrating.

He added: “It has been crazy in a nutshell. BUCS have been really good in communicating with us, but there is a ruling where they want everything to trickle down and want the top end games playing first so things like the BUCS Super Rugby qualification go before anything else.

“It has been frustrating and now we are in the stage of the year when players have exams. We are doing all we can to get players available.

“Of course, they are at university to get a degree. Yes, they come and play rugby and that is an important factor in their decision, but they are being denied an opportunity because of the days the matches fall on.

“It is also really tough to keep the lads focused. They have had the Easter break and they will be concentrating on exams so it will be a massive challenge, but we do have some players coming back from injury which is positive so it does give us confidence going to Leicester. We are still in a good place.”

Jones’ view that MMU are in a ‘good place’ is evident as his side have picked up successive league titles over the last two years.

The RFU making some serious cut backs, not totally sure they're in the right places ??#Grassroots pic.twitter.com/PXR8XVgANh

They are certainly one of the growing university rugby teams in the country and the talent they possess has been spotted by England Students as hooker Christian Taylor was included in their recent squad for matches against France Universities.

England secured an historic victory over the French for the first time in a decade, but a few days after their excellent 27-17 win, the RFU announced they would be suspending the England Students programme for 2019/20 due to financial reasons.

Whilst Jones acknowledges the situation the RFU are currently in, the MMU head coach knows how important England Students is to the grassroots game and player development.

He added: “Should England Students be axed? Absolutely not because it is clear that there have been some absolute gems found through the student game.

“It is the pinnacle of the student game without a doubt. When we sit down with our players every year, that’s what they want to achieve. They want to be nominated and they want to get in. The whole experience is phenomenal.

“People higher up may argue these players would be found regardless of the England Students and that’s the debate, I think.

“The good news is that it is only suspended so it will come back, but I just feel sorry for those who are maybe going into their final year of university next year and are now not going to get the opportunity. I believe the RFU are there to give opportunities and one of them has been taken away.”