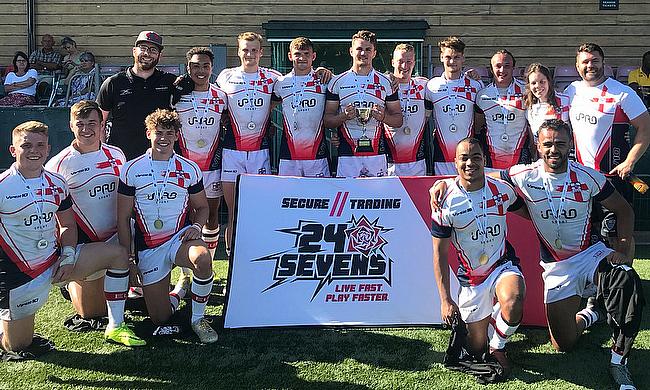 Both the men’s and women’s sides booked their place at The Recreation Ground in Bath following strong performances in the Regional Finals.

The men’s team, coached by Jones, won the title in Ealing at the end of last month whilst the women’s squad finished as runners-up.

English Universities Sport (EUS) is still a fairly new programme after its rebirth last year, but this weekend’s finals provide more experience for both teams ahead of the Home Nations in 2019.

“I think [the experience] is massive,” Jones said.

“First and foremost, they are creating memories that they played for an England side at Bath. We are obviously showcasing what the EUS is about and that is player development and representing your country at university level.

“That is something they will never forget this weekend on that platform and in that environment. It is great for the programme and great for the profile so we will keep shouting about it because we believe in it.”

In the lead up to this Saturday’s finals at the Rec, Jones guided EUS to the last four at Olney 7s in June before clinching the title at Ealing.

Impressive performances throughout in West London saw them take on Skinny Lager Tornados in the final.

“It [Ealing] was tough conditions, Jones continued. “It was 30-odd degrees and we were playing on artificial pitches where the heat rises from the floor!

“I think that was the first time we had been losing at half-time, but we showed great character to come back. We applied what we’d done.”

Following the first couple of tournaments, Jones has been pleased with his side’s attitude.

RUGBY 7’s | Congrats to the English Unis Men’s 7’s squad for making it to the Semi Finals of the @olney7s today! Great first run out as a team, with coach @RobJone08724455 pic.twitter.com/gF3d6hwBqs

The aim for the Manchester Met coach is to continue the progress of University Sevens rugby on a national stage, but Jones admits the focus is still on the Home Nations next year and reiterated the mentality already instilled amongst the squad is only helping the growth of the programme.

“It was a bit of blank canvas when I came in to it,” said Jones.

“It is a very new programme and there is a lot of conversation about where it sits in the national programme. I don’t really care where it sits. I just want to develop lads that are serious about their Sevens. It’s that simple.

“The lads have also put in a lot of hard work and we continue to develop at every opportunity ahead of the Home Nations next year. They do a lot of work off the field which goes largely unnoticed and it is all about improvements in all aspects.

“Hubbsy (Assistant Coach Alan Hubbleday) is doing a brilliant job and is bang at it in terms of the reflections to players and showing them examples of the good work that they do. The lads respond well to that positive feedback and they are keen to put in the work.”

Jones admits his side are looking forward to playing at the Rec and admits EUS may have an edge over their opposition this weekend, however, he insisted the experience in Bath will be another step in the right direction regardless of the outcome.

CONFIRMED | The National Finals of the @SecureTrading 24/Sevens Series

“I want to win!” he added. “One of the unique differences of this tournament is that some of these representative Sevens teams can change week in, week out depending on player availability.

“Whilst we are a representative Sevens team, we are a team. We are the same players and that has got to give us an advantage. We train together and play together and I would imagine, most of the other teams don’t.

“They could be a different group at each tournament so I have no idea what to expect from the opposition. We will go into to this confident and back each other because we know our game.

“We got the trophy at Ealing. We aim to get the trophy here and all that does is build momentum and success.

“The lads are confident and absolutely raring to go, but the goal from outset is to win the Home Nations.

“That continues to be the goal and will be after this weekend no matter whether we finish first or eighth. We will use it to learn and have fun before meeting up again, but the lads are keen to meet up before Christmas. We will hopefully play in an Easter time Sevens tournament as well before we head into the Home Nations.”

English Universities Men’s side will be competing alongside the likes of International Gents 7s, Billingham 7s, and Tornado 7 whilst the Women’s finalists include West Park Leeds, Harrogate and Swansea Ladies.