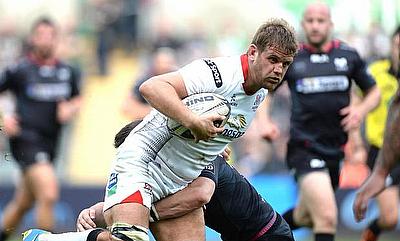 Ulster eclipsed Ospreys challenge with a 46-26 win to secure a Pro12 play-off spot as Ospreys failed to qualify for the next year's European Champions Cup tournament.

Biggar also scored three penalties for Ospreys, however, the fly-half's efforts proved inadequate as Ulster managed to hold on to their advantage.

Coming in the second-half, Ospreys trailed merely by seven points. However, they conceded an early penalty on the 42nd minute to Ulster which was successfully scored by Paddy Jackson.

From that point Ulster took charge of the proceedings as Henry's try and Jackson's conversion on the 56th and 57th minute respectively extended their lead to 15 points.

Despite a 22-point trail in the concluding five minutes, Ospreys continued to make attempts at scoring tries.

Grabham managed to get over the line on the 75th minute as Biggar successfully made the conversion reducing the deficit to 15 points.

However, van der Merwe's 77th minute try for Ulster sealed the proceedings and crashed Ospreys' European hopes for the next season.

This win for Ulster has now placed them against Connacht at Galway in the Pro12 semi-final.