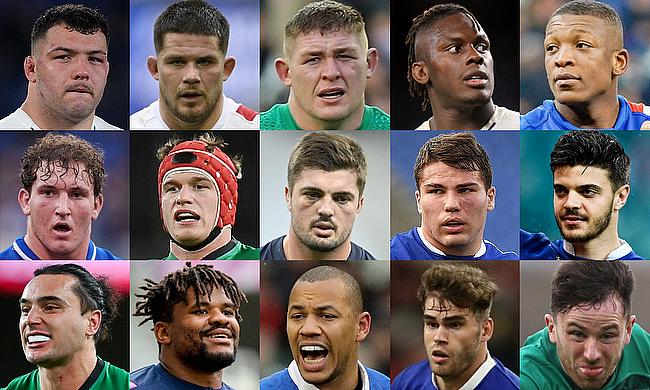 1. Ellis Genge (England) - Genge made powerful contributions across the park throughout all the games, carries like a beast and works hard at the set-piece. Cyril Baille needs a shoutout.

3: Tadhg Furlong (Ireland) - Didn't quite set the tournament on fire with highlights, but take nothing away from his usual work rate, still the best tighthead around.

4. Maro Itoje (England) - No matter the opposition Maro stands out for England, a menace in defence and always adding to his carrying abilities around the park.

5: Cameron Woki (France) - Came into his own in this tournament, frighteningly athletic and in a world of his own at line-out time, narrowly keeping teammate Paul Willemse out.

7. Josh van der Flier (Ireland) - Great to see him back to his best, crops up everywhere and gets through the work, thrives in both defence and attack. Potential Player of the Tournament.

8. Grégory Alldritt (France) - Top of the carrying charts with 65 shows you the type of work rate he's got for a big man, keeps the French attack ticking over, unit.

9. Antoine Dupont (France) - Didn't shine in all games, but knows how to lead in the big ones. Captaining France to their first Six Nations tournament win in 12 years, a Grand Slam no less!

10. Romain Ntamack (France) - Rarely makes a poor decision, the king of cool outside his half-back partner, the most try assists in the tournament with four, plenty to come from him.

11. James Lowe (Ireland) - Lowe made plenty of big carries on and off the wing racking up a total of 439 metres with ball in hand, and add to that tournament joint top try scorer.

12. Jonathan Danty (France) - Both aggressive in the carries and in defence, formed a formidable partnership with Fickou. Busting through tackles, trucking up and decent hands.

13. Gael Fickou (France) - A massive source of flair in the stacked French backline, deceptively fast and elusive. Conjuring up attacking opportunities from nothing.

14. Damian Penaud (France) - Another top try scorer, the French winger is dynamic and forceful enough to evade any would-be tackler, hell of a set of wheels too.

15. Hugo Keenan (Ireland) - Really impressed this tournament, 388 meters made with ball in hand, extremely talented under the high ball and knows his way to the tryline.