TRU's Gallagher Premiership XV of the week: Round 12 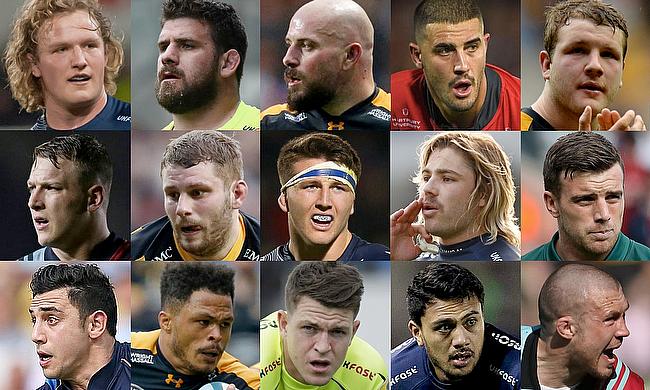 TRU's Team of the Week
©TRU

In Round 12 of the Gallagher Premiership, the sides battling at the bottom of the table picked up significant results and Joe Harvey has selected a few of their standout players in his latest team of the week.

1. Ross Harrison (Sale Sharks) – Harrison was a rock for Sale in their win over Saracens on Friday night. Packing down against the formidable Vincent Koch, the Englishman held his nerve and didn’t allow his opposite number many yards at all. What is even more impressive about Harrison’s display is that he played the full 80 minutes and didn’t seem to tire after a fair few scrums.

2. Rob Webber (Sale Sharks) – Already we have a second Sale player on this list. Webber didn’t go the entire distance like his front-row counterpart, but still played an impressive 78 minutes for Steve Diamond’s side. Accurate as ever at the lineout, Webber didn’t cough up possession at the AJ Bell and was a reliable defender when Sarries threatened to break through.

3. Jake Cooper-Woolley (Wasps) – Now we move on to a player who will be at Sale next season. Playing 66 minutes at the Ricoh before being replaced by Will Stuart, the tighthead prop contributed to the nullification of Northampton’s youthful pack. Contributing a turnover to the cause as well, Wasps will be getting some solid performances from Cooper-Woolley before he departs for the AJ Bell.

4. Gerbrandt Grobler (Gloucester Rugby) – Despite being on the losing side, Grobler was by far one of the most productive and destructive locks in the Premiership last weekend. The South African ran for 50 meters with ball in hand, as well as causing three turnovers with the aim of getting Gloucester a win. He stood tall in what has been a faltering Cherry and Whites team in past weeks.

5. Joe Launchbury (Wasps) – Not having played domestic rugby since September, Joe Lauchbury was awarded man of the match for his display against the Northampton Saints. Wasps have arguably been missing a leader in recent times and the inclusion of Launchbury seems to have resolved this situation quite nicely. Calmly going about his business, the England player was resolute in defence, hardly giving Saints anything to work with. Playing the full 80, despite only just returning from injury cannot be ignored either. A great performance from Launchbury.

6. Alex Dombrant (Harlequins) – Well, what is left to say about Alex Dombrant. The former Cardiff Met star has transitioned to the Premiership with apparent ease and yet again, he put in a man of the match effort, this time away to Newcastle. Scoring another try, Dombrandt was also an influential figure in defence. Making 16 tackles, more than either of his backrow colleagues, the former Wales U20s player also caused a turnover. Hopefully Eddie Jones is watching.

7. Thomas Young (Wasps) – Maligned for many years as being ‘the coach’s son’, Thomas Young has certainly become a star in his own right at Wasps. This game was another example why. A well-rounded performance, Young carried the ball extremely well, made over 15 tackles and created a turnover for his team. He displayed everything that the modern day openside flanker has to be. How Wales haven’t capped the man is a mystery.

8. Tom Curry (Sale Sharks) – Whilst not a number eight, Curry can’t be overlooked for this team. Any game against Saracens will be a defensive challenge and this fixture was no different. Having two quite brilliant turnovers attributed to his name, Curry seemed to be at virtually every ruck, knowing exactly when to pounce. Added to this, he made 20 tackles so Curry must have had a fairly sore Saturday.

9. Faf de Klerk (Sale Sharks) – Best scrum-half in the world? Whether or not that is the case, de Klerk has impressed week upon week since returning from South Africa duty. Reliable quick-ball after every ruck, de Klerk wasn’t a massive attacking threat in this game more of a game manager for Steve Diamond’s side. Manipulating the Saracens defence just by having possession, Mark McCall’s men were perhaps too wary of the threat that de Klerk possessed.

10. George Ford (Leicester Tigers) – So far in this side the phrase ‘well-rounded performance’ has come up once or twice, maybe even in different guises. if those performances were well-rounded, this one was a complete display from George Ford. Scoring everything bar a drop goal, Ford was named man of the match at Welford Road for his efforts in this game. A force in defence, an area that Ford has been criticised in the past, the flyhalf tallied 13 tackles against a big Gloucester team.

11. Bryce Heem (Worcester Warriors) – Scoring the winning try is always an eye-catching thing to do, however when you’re Bryce Heem, everything you do is eye-catching. The New Zealander scored Worcester’s two tries in this game and was a threat all night against a dogged Bath defence. Carrying for well over 100 meters in this game, Heem even got a turnover amongst all the chaos at Sixways. If Worcester were to go down, this man would be hot property.

12. Juan de Jongh (Wasps) – Getting a starting berth in this game, de Jongh had a big part to play in Wasps’ victory at the Ricoh on Sunday. Only making nine tackles, the Springbok actually had three turnovers to his name, a very flattering statistic. Added to this, he was a thorn in the side of Northampton every time he got the ball. Breezing past Ahsee Tuala for his try, Saints couldn’t find a way to contain him.

13. Sam James (Sale Sharks) – Touted as possibly the most talented English rugby player without a cap, Sam James had yet another worldy for Sale. A more than capable distributer of the ball and an unpredictable runner, Saracens really had no response for James’ brilliance. Perhaps not the strongest defender in the world, it would be fascinating to see what the utility back could do in an England shirt.

14. Denny Solomona (Sale Sharks) – Since his transition from rugby league, Solomona has always been one to watch. Big and fast, the England man has been indifferent for some time now. Scoring an impressive try in this game, Solomona picked up 82 meters with ball in hand from only six touches of the ball. Now those are some carrying stats. The main hope is that the New Zealand-born wing can push on and potentially get back in the running for England.

15. Mike Brown (Harlequins) – Finally we have a bona fide Harlequins legend. Making his 308th appearance for Quins at the weekend, Brown broke the all-time appearance record for the club and yet again proved his doubters wrong. Playing in a young backline, Brown is the calm amongst youthful excitement and was a rock against Falcons whose tries only came in the second half. Kicking balls through and the odd key pass, Brown will be going down in the history books regardless of this game.