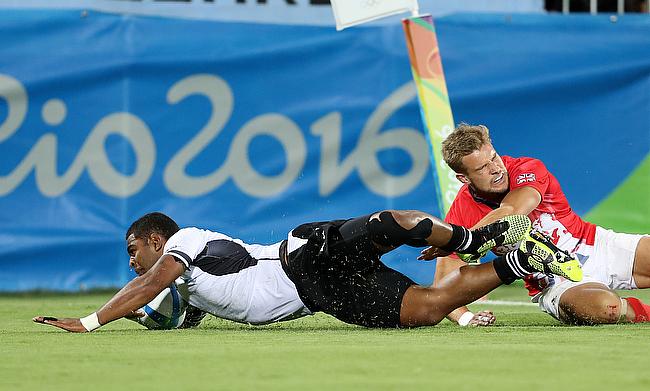 Great Britain captain Tom Mitchell was pleased with his team's efforts at the Olympics rugby sevens at Deodoro Stadium where they finished with a silver medal.

After remaining unbeaten in the group stage, Great Britain edged out South Africa 7-5 in a thrilling semi-final to set up a final with Fiji. However, Mitchell's men were completely outplayed in the final day of the event by Fiji with a scoreline of 43-7.

Fiji coach Ben Ryan will step down from his role after his team went on to win the country's first ever medal at the Olympics while Great Britain can be proud of their efforts of ending runners-up in the tournament.

Describing it as an "amazing journey.

"I had a few tears at the end," Mitchell said.

"Everyone has worked so hard, and it has been an amazing journey. It is a nice little way to finish it with a silver medal.

"There were those who thought we wouldn't do so well out here, and we knew we had to come here and scrap. We knew it was about working hard.

"They (Fiji) turned it up a notch, and we've seen them do that on the World Series in the last couple of years.

"They are an incredibly talented bunch of guys, and when they are on form, they are very difficult to stop.

"They got a few scores ahead, which meant we had to chase the game a little bit, then it got a bit loose and that is what they thrive on.

"It is the national sport in Fiji, and those guys will go home and be heroes. I am very happy for their whole group."

Meanwhile, Fiji captain Osea Kolinisau, who scored the opening try in the game, said it was a dream come true for the whole country.

"I was just thankful to the lord for blessing us and giving us an opportunity to win in a mega-sport arena like the Olympics," Kolinisau told a press conference that began with the sound of applause.

Fiji coach Ryan was extremely pleased with his team's effort at the grand stage and is confident of a bright future for the group.

"I feel very lucky that I'm in charge of such an unbelievable group of athletes with a country behind us that is so passionate about rugby sevens," said Ryan.

"I try to explain it to people who don't go to Fiji or who have never been and it's impossible really," Ryan added on his adopted nation's love for sevens.

"The boys are front page and back of newspapers, six o'clock news... You come out of the airport and there's a 20-foot billboard of them. They're superstars in Fiji."