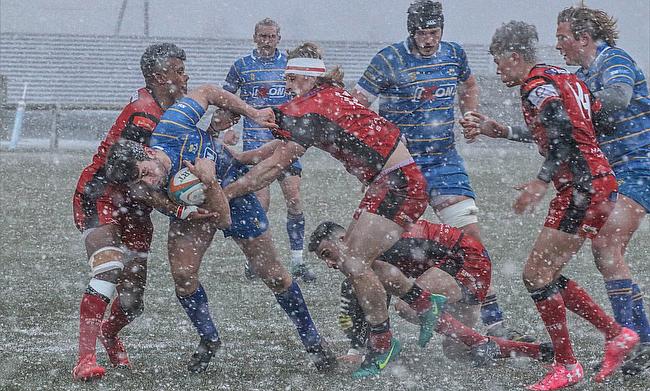 The severe weather conditions caused havoc in BUCS rugby last week as it brought a freeze to some important fixtures across the country, including Northumbria University’s crucial clash against Leeds Beckett.

Darren Fearn’s side knew that a victory away at Leeds Beckett would seal the BUCS Super Rugby title for the North East outfit, but ‘Storm Emma’ put a stop to that.

With their match postponed, the University of Exeter capitalised as they beat Loughborough University to move three points clear at the summit having played all of their domestic fixtures. It means Northumbria must win their rearranged game with Leeds Beckett to be crowned league champions.

Beckett were also unable to take to the field on Sunday as their fixture with Cardiff Met was postponed.

Elsewhere, Hartpury have put themselves in a brilliant position to secure a home quarter-final in the BUCS Championship as they continued their fine recent form to be beat the University of Bath.

Below is a round-up of all the BUCS Super Rugby results plus a review of the league and cup action that was able to take place.

The University of Exeter took advantage of Northumbria’s postponement against Leeds Beckett to move to the top of BUCS Super Rugby following a thrilling victory over Loughborough University.

Keith Fleming’s side crossed on four occasions in the first-half with Jack Rouse, Jesse Lipetz-Robic and Mike Haines all touching down while Exeter were also awarded a penalty try.

Loughborough were only five points behind at the break thanks to tries from Sam Grahamslaw and Callum Watson as well as a close-ranged score, but Ted Landray went over for the visitors soon after the restart.

Paul Schroter and Kieran Kelly added to Exeter’s tally to give them a 24-point lead with 14 minutes to go, but Loughborough produced a storming comeback.

A penalty try plus scores from Will Attfield and Jack Antoniou brought the game back to 45-42, but the away side were able to go over on one more occasion to seal the victory and put the pressure on title rivals Northumbria.

Hartpury have moved level on points with fourth placed Loughborough University after beating the University of Bath.

Sam Lemming got Hartpury’s first try on a very snowy evening in Gloucestershire and winger Alex Forrester darted over for a second.

Hartpury led 24-0 thanks to further scores from Harry Wilson and Maliq Holden, but Bath hit back with a try of their own after half-time.

The away side managed to cut the deficit to seven points with two more tries, but Luke Stratford’s effort 10 minutes from time sealed a seventh win for Hartpury from their last eight matches.

Hartpury also have one more fixture to play against Durham University this coming Wednesday and the current champions require just a point to guarantee a home quarter-final.

Also, the BUCS Super Rugby play-off fixture between Newcastle University and Cardiff University was called off due to the severe snow.

The BUCS Vase competition began last week with the 14 remaining teams from North A and South A all vying for the trophy. North A winners Durham 2nds and South A runners-up Hartpury 2nds were given a ‘Bye’ into the quarter-finals while there is just one other representative from the north joining Durham in the last eight as things stand.

As for the southern teams, USW are through after a comprehensive 51-32 victory over Loughborough 2nds and they will be joined by fellow Welsh side Swansea University who were handed a walkover win against the University of Edinburgh.

The first semi-final in the BUCS Men’s Trophy was played last week and Reading University have progressed to the final in Nottingham after a 12-7 win over South B outfit Exeter 3rds. The other tie between Leeds Beckett 2nds and the University of Sheffield takes place on March 16th.

The road to Twickenham has begun for some of the best women’s teams in the country and the top two from Premier South made no mistake in the quarter-finals. Champions Hartpury thrashed Loughborough University 51-5 while the University of Exeter also advanced following a 22-10 win over Durham University.

All fixtures in North B and South B were called off this week and that was a similar theme across some of our other featured leagues.

However, there was a fixture in Midlands 2A as champions Harper Adams University claimed their ninth straight win of the campaign as they beat Birmingham 3rds 24-11.