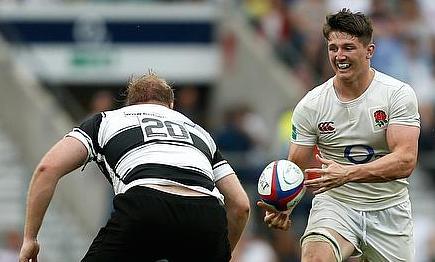 England international Tom Curry is the latest to have signed a contract extension with Gallagher Premiership Sale Sharks.

The 20-year-old made his debut for the Sharks during the Champions Cup game in October 2016 and two weeks later made his Premiership debut for the club where he became the third youngest player to score in the history of the competition.

The 6ft flanker also shared the club's Young Player of the Season award with his brother Ben at the end of the 2016/17 season.

“I’m delighted to put pen to paper again at such an exciting time for the club, with recent announcements of re-signings (including twin brother Ben) and reported signings in the future," said Curry to the official website of the club.

Curry, who was part of the England Under 20 side that clinched the Grand Slam during the 2017 Six Nations Under 20 Championship has played five Tests for the national side after making his debut against Argentina in summer series last year.

Sale Sharks director of rugby Steve Diamond lavished praise on Curry and his role with the club.

“I’m delighted that England international Tom has pledged his future with the club. He’s come though the Academy and, along with his brother, has been a revelation.

"He’s already a senior member of the playing group and is the best example of the modern-day professional rugby player: dedicated, clean living, abrasive and he has a great knowledge of the game for one so young.”