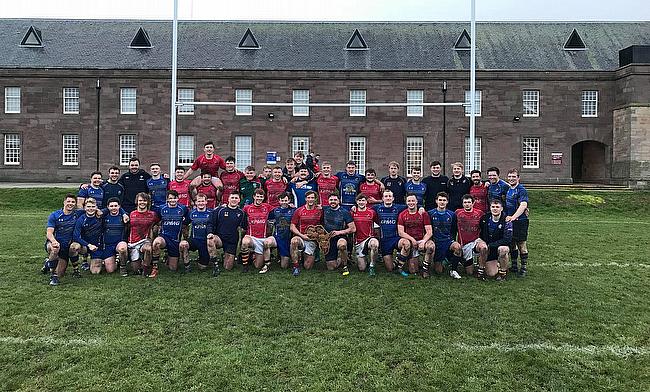 They call Aberdeen the Granite City - and the University of Aberdeen men’s and women’s rugby teams have certainly been tough to beat so far this season.

The men’s first XV have won six of their seven BUCS Scottish 1A fixtures to date to sit top ahead of Wednesday’s home match with the University of St Andrews.

And the women’s first XV are also top of their respective BUCS Scottish 1A division with four victories from six as they prepare to travel to St Andrews this week.

So, what has been key to this great run and growing sections? A lot of hard work it seems…

Men’s first XV captain Max Stobbs, a 23-year-old fourth year real estate student who normally plays centre, told TRU: “The university’s facilities are excellent, however our access to them is very limited due to financial constraints.

“We are only granted an hour and a half of training time each week on the indoor artificial pitch. Sharing this space between four men’s teams is not ideal, however we do our best to work around it by planning our sessions to maximise the space and time that we have.

“Each team’s sessions are led by captains along with captains leading all game day preparation and team selection. This player led approach motivates us and provides a close team environment.

“The boys in the first XV are pretty happy with the progress we have made so far this season, however we know we still have a lot of work to do. Our away victories in Newcastle and St Andrews have been the highlights to date.

“We also have a Saturday team that plays in Tennent’s Caledonia North Three and this team is made of a mix up of players from all teams.”

Having taken up rugby aged nine, Stobbs says he is honoured to be captain of the top team at the university.

“I live on a farm near a village called Abernyte and I took up rugby at my local club in Dundee called Dundee Eagles,” he explained.

“It was a great honour to be selected as first XV captain for the university club, it’s quite a lot of responsibility, but the lads are pretty helpful with it all and we have good fun.”

Like the men’s teams, the women’s team train once a week indoors while they also get time outside at the Balgownie pitches on a Monday.

Women’s first XV captain Isla MacKenzie explained: “This year we have two coaches that are working hard to push our team into doing the best we possibly can.

“Coaches are not always easy to come by, so we are so grateful to have snagged these two - our team would not be where we are if it wasn’t for their determination and grit to whip us into shape.

“I am so pleased with the first team’s progress so far in BUCS. When I first started playing, we didn’t know what it was like to win a game - to go from that to being top of the league is absolutely amazing to see.

“We are a really close-knit team, if some girls are not on the team sheet on game day, we never fail to have them down as supporters which is really lovely to see and it really boosts the morale of the team that is playing.

“I think our hopes are to win the league this year – it would be absolutely amazing after all the hard work that has been put into the team over the years.

“We have a really tough few games ahead of us for the last part of the season with many of them being away games which are always trickier, but I have faith in the team and I think now that we can see the outcome of hard work, we can really push ourselves for the final stretch.”

Around 50 players are linked to the women’s section with one competitive team.

And 22-year-old accountancy and finance fourth year student MacKenzie is really enjoying the role of captaincy.

“Originally I come from Gairloch in the North-West Highlands and I took up rugby when I moved to Aberdeen for Uni in 2014,” the prop, who has also played back-row at times when required, explained.

“I am really enjoying being captain, I think a big part of that is because I get on so well with the girls.

“I would like to say that I am a fantastic captain and exceptional motivator, but I know that particularly on game days I am quite the broken record - sorry ladies, but you only have to put up with me for two more months!

“Being captain is a big responsibility as you have a lot of people looking to you for answers and support, and whilst that can be challenging sometimes, I wouldn’t change it for anything.”