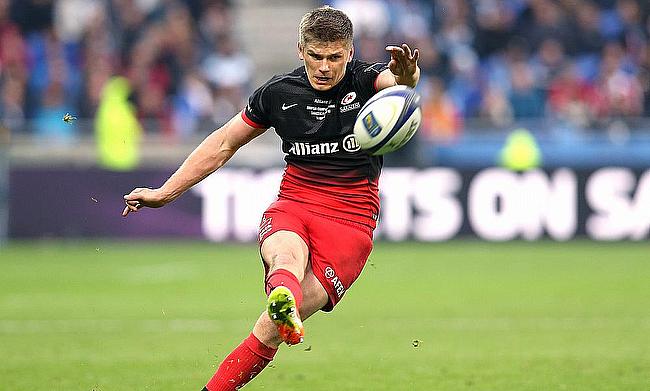 The narrative of this unusual season was becoming less and less about Saracens.

Throughout the campaign, the club have dominated the headlines for their salary cap breaches but since the resumption of the Gallagher Premiership, Mark McCall’s side, for once, had not been the main focus.

Sarries’ punishment for breaking the rules led to their extraordinary relegation from the top-flight so with the English champions out of the equation, the race for the Premiership title has been refreshingly transformed whilst the arrival of star signings like Semi Radradra (Bristol Bears) has helped elevate exciting stories into the spotlight.

Since rugby’s return, Saracens had been going under the radar and three wins from their first four matches was a clear sign that the London-based side were generating momentum ahead of their Heineken Champions Cup quarter-final with Leinster next Saturday night.

With tough encounters against Wasps, Sale Sharks, and Exeter Chiefs to come before their trip to Dublin, Saracens’ focus was purely on the rugby and nothing more, but when things seemed to be ticking along nicely, McCall’s men now find themselves under the microscope once again.

It has been quite the ride for Sarries the past 12 months.

As the club prepares for their farewell tour of the Premiership, Mark McCall and @elliotdaly spoke to TRU and other members of the press before their trip to Bristol on Saturday.

Instead of Bath’s excellent display in front of 2,700 fans against Harlequins or Manu Tuilagi scoring for Sale at Welford Road, the headlines from Round 18 belonged to Sarries and Owen Farrell.

The England captain’s reckless tackle on Wasps’ Charlie Atkinson last Saturday earnt him a red-card and the club will now be without their talismanic fly-half for next week’s tie with Leinster after Farrell received a five-match ban for his actions.

On Monday, McCall was resigned to losing one of his star men for their quarter-final and it has clearly thrown a spanner in the works for Saracens, who had aims of salvaging something from a turbulent season.

“Obviously Owen got the tackle wrong, there's no question about that,” said McCall prior to Farrell's disciplinary hearing. “You could see from his reaction as soon as it happened that he knew he got it wrong and he is incredibly regretful. He stood on the touchline and waited for Charlie to get up and come off and he was really concerned for him. That’s the way I saw it. You could see on his face how he felt.

“We can safely assume that Owen won’t be available for [the Leinster] game and we will plan as such, but he will definitely be involved in helping us prepare for the game.”

Farrell will now watch on when his side travel to the AJ Bell to face Sale this evening before Saracens renew their rivalry with Exeter Chiefs at Allianz Park on Sunday afternoon.

The absence of the England international has meant Sarries will need to regroup, but it has also opened the door for the likes of Manu Vunipola to possibly guide his side through a Champions Cup quarter-final or the vastly experienced Alex Goode could also step into the 10 jersey.

“There’s probably two options at the moment – Manu to start or Alex Goode,” added McCall, who has selected Vunipola at fly-half for their trip to Sale.

“That’s the choice we have got to make. Every challenge Manu has faced over these eight or nine months has prepared him for moments like this. Undoubtedly, he will be in our 23-man squad [for Leinster] and we think he is ready.

“We need to see what our centre options are like. As you saw from our team at the weekend, we picked Elliot Daly at 13. We were excited to see Owen, Elliot Daly and Goodey playing together in the same backline but that's not going to be possible for Leinster so we need to figure out what our midfield will look like and how Duncan Taylor does on Wednesday night will be important to that.”

Taylor is one of several changes which McCall has decided to make for their trip to the North-West and also included in Saracens' matchday 23 is Will Hooley.

Whilst his Director of Rugby suggested there are only two candidates for the fly-half berth against Leinster, the USA international could easily operate at 10 or fill in at full-back and Hooley hopes to impress when his chance comes around.

“The one thing I have learnt having been involved in the game now for a few years is that you have got to be ready for anything,” Hooley said.

“Someone’s misfortune could be someone else’s fortune so like I say, it is about Wednesday and Sale away. I know if I can do a good job in whatever position, then I will be happy and hopefully the coaches will be happy. Who knows what could happen.”

As for Sale, Steve Diamond has reverted back to his 'Dirty Dozen' who two weeks ago, reignited the Sharks' top four hopes at the Ricoh Arena: “As I call them, my midweek team, the Dirty Dozen, went out and beat Wasps who are beating everybody at the minute,” Diamond said.

Without their punishments this season, Saracens would currently be second in the Gallagher Premiership standings and challenging Sale for the title, so despite the adversity they have faced, McCall’s side have clearly shown a steely resilience ever since the salary cap breaches first came to light in November.

“From day one, the Gloucester game, post the first punishment of 35 points, we went out there and showed unity and that has really continued,” McCall said. “It has been a very difficult season for everybody, but in this tough season, there has been many uplifting moments. The players have shown togetherness and unity in difficult moments.

“We know the scale of the challenge as well. I think Leinster are unbeaten in 14-15 months. They are a superb team and they will be favourites with us as underdogs. Quietly behind the scenes, we have got to prepare as well as we can.”

Whoever McCall chooses to fill the void left by Farrell will be high on the agenda when the Champions Cup returns next week and whilst it is a different experience witnessing the climax of both the European and domestic campaigns in autumn, Saracens are once again very much part of the narrative as this unusual season draws to a conclusion.