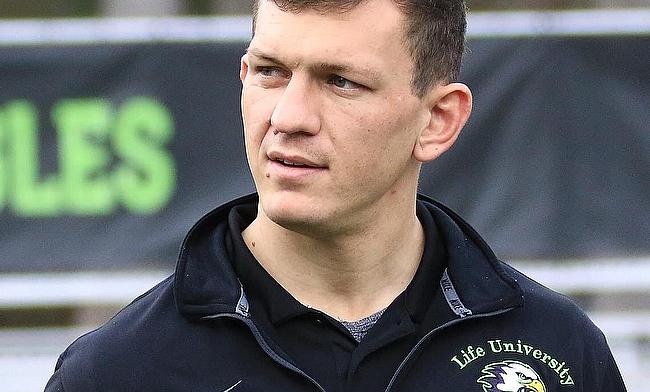 AJ MacGinty: Going to Life University was massive for me
New York's Greg McWilliams on the continued improvement of rugby in the USA
Dave Clancy - Developing America
Blaine Scully: We have a lot of things we need to work on

With four of his players up for selection in tomorrow night's MLR draft, Life University Men's Rugby head coach Colton Cariaga is charged with the continued development of the young men that have chosen to play under him in Georgia.

A former Life University player himself, Cariaga captained the side to two national championships before moving to Ireland for a year, in order to coach Blackrock College whilst also playing for Trinity Rugby in the AIL.

Coaching on a full-time basis with Life since 2014, Cariaga has been the head coach of the university for the last three years.

“I think it helps illustrate something that we talk about a lot, particularly when we are recruiting players to our programme,” Cariaga said. “One of the things we ask is what their ambitions are. For the most part, that is who we are interested in. We are interested in guys that have goals to take them beyond our programme.

“This week, we have been doing a social media rollout of all the guys that have entered the draft and to be able to give that tangible visual. Our current players have played with those guys who will be in MLR and then also the guys that have already spent one or two years there. I think in the past, we have had maybe two guys go and play in the Premiership in 10 years, so it was hard to be tangible because it was like the one per cent of the one per cent.”

Tune into the MLR Collegiate Draft this Saturday, June 13 at 7 PM ET on the MLR Facebook page.? #RoadToRugby pic.twitter.com/9vWw2WNy8W

Whilst there is an array of former Life University players turning out for MLR sides, it is only AJ MacGinty and Cam Dolan who have made waves in Europe.

MacGinty is an integral member of the Sale Sharks team, whilst Dolan represented Northampton, Cardiff and Nottingham, but is currently with New Orleans.

“We have had former Premiership and Pro14 players join our staff in the past and then we have a number at Life that then go to MLR, the national team or overseas,” Cariaga said. “Every one of them talks about how this is as good, if not better, in terms of professionalism than the other experiences that they have had.

“It is a real simple lifestyle down here. You go to school, you get your degree, you train, you lift weights and if you need physio, you go to the physio. That’s all we really have to do. Everything that you need to be successful is here. Like I have said, one of the first things we ask when recruiting someone is what their ambitions are.

“If that is part of your recruiting criteria, then naturally you want to play a key part in pushing them to that goal once they’re done and making sure that the pathway is set up for that. That is not something every player really understands and it is a big part of where we come in. I think the beginning, middle and end is another way of looking at it and it is really important for us that we are pushing them along whatever that goal may be.”

Starting at midnight on Saturday (BST), the inaugural MLR Draft is set to have two rounds of picks. New franchise the Dallas Jackals will be making the first pick with LA having traded away their first round pick to New Orleans.

The Toronto Arrows will not be participating in the first draft due to commitments to Rugby Canada and the continued development of young players in Ontario. Now that rugby is a potential career option for young players in America, Cariaga believes that the sport will hugely benefit the country overall.

“Three years ago, we didn’t have a pro comp and now we do,” Cariaga said. “When I finished university, there was no way to get paid to play really, unless you were on a contract with the country. The natural growth of it means that more kids will be interested in the sport, so there will be more people to look at (to recruit for Life).