Blaine Scully: We have a lot of things we need to work on 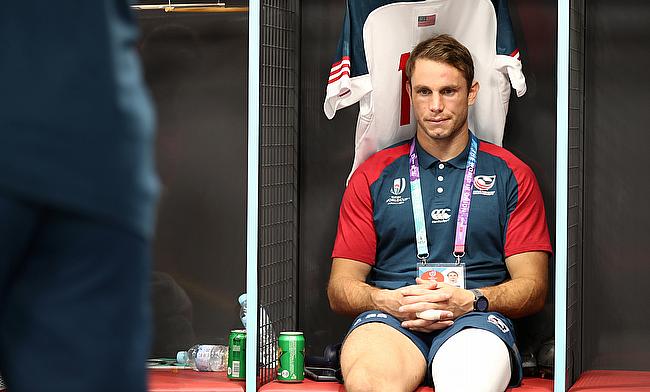 When Blaine Scully was replaced after only 20 minutes in the USA’s final 2019 World Cup pool stage fixture, little did the wing know that would be the final time he would step out on a rugby field as a player.

Holding the captaincy of his country after the international retirement of Chris Wyles in 2015, Scully had been a dependable campaigner for the USA for eight years, representing the Eagles at three Rugby World Cups, as well as domestically for Leicester Tigers and Cardiff Blues.

Planning on taking a break from the sport following the World Cup anyway, the injury he sustained against Tonga and the birth of his first child, prompted the 32-year-old to hang up his boots for good. Now, living in New Jersey, Scully spends his time caring for his daughter and preparing for the future.

Scully is also taking part in the 'Crossover into Business' programme at Harvard University, a programme that helps former athletes develop the business skills necessary for success after their time on the biggest stage has come to an end. As well as this, he has launched The Captains Code Podcast and until the outbreak of COVID-19, he was also part of NBC’s coverage of the Six Nations.

With all the talk that the USA were trending in the right direction prior to the Rugby World Cup, many expected the North Americans to fare well against the likes of Tonga in their pool as well as being competitive against France and the Pacific Islanders, even if they did ultimately lose.

“It shows how hard it is and reinforces just how hard it is to win Rugby World Cup games and how fine of a line it is between being competitive and getting a result,” Scully said. “They often hang in the balance of one or two moments and you can kind of go right down through our performances, maybe outside of the England game, where we were 100% in the game.

Today I officially announce my retirement from the sport of rugby. I thought of a million different ways to say thank you and while there in no perfect way to say to say goodbye, I did the best I could in this letter... “It is with a heavy, but grateful heart that I officially announce my retirement from the sport of rugby. For over 10 years, I have accepted the responsibility of the US jersey and hoped to live up to what it means to be an Eagle. After three Rugby World Cups, 54 caps and countless memories of wearing red, white and blue in cities from Sacramento to Tokyo, I am proud of what I did. But as the great Bill Russell said, “You play until there are no games left in your jersey.” It’s my turn to give it back. To the friends, teammates, opponents, coaches and fans, to the clubs and countries, and of course, the game itself, you have my deepest thanks for the experience of a lifetime.” (Link in bio)

“It’s hard to take for all of us, for our coaching staff, our playing group, the entire rugby fanbase in the United States because we put everything into it. The margins are so small, and they are so fine at that level. If you get it wrong, you get hurt. For us there were one or two moments like that and that’s what it is, that’s what happens when you step into the arena sometimes.”

Studying history at the University of California, Berkeley, Scully made quite the name for himself. Captaining the All-American side in 2011, before going to his first Rugby World Cup, the he has become one of the foremost voices on rugby in the USA over the duration of his career.

Establishing the United Stated Rugby Players Association several years ago, Scully has seen the development of rugby in the US from afar over the past nine years. Returning to his homeland, there is now a professional league that is hoping to pave the way for future generations of Eagles.

“In rugby, everyone tends to measure themselves on a Rugby World Cup performance,” Scully said. “In some ways, this is just a mini look into what is going on comprehensively inside of a union and, for us, we have a lot of things we need to work on.

“That starts form mass participation, exposing our youth to the game and then creating and sustaining those pathways all the way up to the national team, which now thankfully includes Major League Rugby. Hopefully we can continue to build a very robust, comprehensive university programme infrastructure.

After careful consideration, the USA Rugby Board and Medical Committee have extended the current hiatus of sanctioned rugby activities for the foreseeable future.

Visit the link as a real-time resource of info through this period.

“For us, the most important thing is having the sport of rugby ingrained in our scholastic model, which is how we operate as Americans. It is an amazing combination of both athletic and student development and that is our academy system.”

It is widely believed that the future success of rugby union in America is the introduction of the sport into high schools. The reason being that even if the best student athletes decide to pursue traditional North American sports careers in the NFL, NBA or NHL, they can return to rugby if they choose and have an understanding of the sport that some crossover athletes struggle with.

In Massachusetts, rugby is a core programme in high school, making it one of the breeding grounds for American talent. Given the country’s large population, the roll-out of rugby doesn’t have to span the whole country, just in enough places to start the long-term success of the nation’s international sides.

With this said, the future of USA Rugby has been thrown into doubt. On the 31st of March, the union filed for Chapter 11 at the US Bankruptcy Court. Not the first time that USA Rugby has faced difficulty following a World Cup, the governing body was in the midst of an internal restructuring and the outbreak of COVID-19 has just speeded up the inevitable in many people’s eyes.

“USA Rugby was tracking out of direction, it was well known after the World Cup,” Scully said. “It was publicly stated and there was a number of statements issued based on the financial sustainability and health of the union. The current situation, I guess, fast-tracked that scenario.

“We’ll wait to see what happens with Chapter 11 and then, the big question is, there is a restructure going on as well inside the union, but then it is always at the end of the day, what it looks like after that and that is a core thing that we need an answer for. Where our resources are allocated, the vision and strategy around how to build the sport and the business of rugby in the United States.”

The model of rugby in America is inherently different to that of the traditional rugby nations. With an array of private investors, bankruptcy for the union has been partially caused by the overspending on the men’s national team and their time in Japan.

Currently working with the US government and World Rugby to become solvent again, there is little doubt that USA Rugby will continue to be a presence for years to come, even if the future is unclear at present.

You can listen to Blaine Scully on the TRU Podcast: