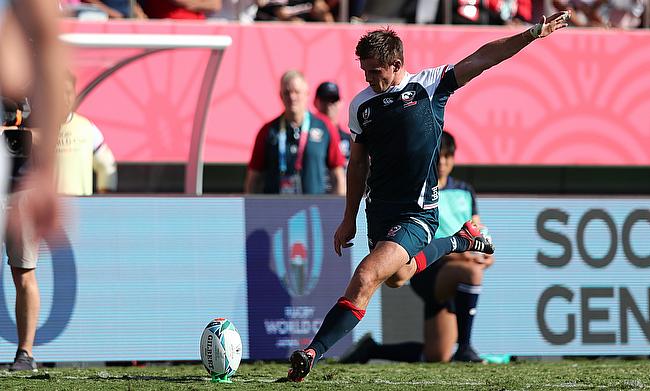 New York's Greg McWilliams on the continued improvement of rugby in the USA
Dave Clancy - Developing America
TRU Quarantine-Cast 5: USA Rugby Special
Blaine Scully: We have a lot of things we need to work on

After finishing his education in Ireland, AJ MacGinty went straight to the Big Apple.

With a group of friends, the fly0-half had a year visa and even turned out for the New York Athletic Club in order to carry on playing rugby. The Irishman would then be approached about doing a masters at Life University on a scholarship, an opportunity he would not turn down.

Having played Life University on three occasions whilst representing New York, MacGinty knew a bit about the side that he would be joining. A rugby programme that has produced several USA internationals including MacGinty, Cam Dolan and Dylan Fawsitt among others, college rugby has now been pushed to the forefront of professional rugby in the USA due to Major League Rugby's draft system.

It is Life University that forms the foundation of MLR team Rugby ATL as they play at the same venue, with many alumni of the university turning out in grey and black.

“Americans love their sport,” MacGinty said. “They are incredibly competitive and there is never a lack of strength or speed. Going to Life University was massive for me because skill-wise I had a pretty good pedigree, but like size, strength and speed, I would have never had done any work like that in the gym.

“I wasn’t in a pro environment, I had other distractions so, I went to that university. It was five days a week that you are at the gym, you have got speed training, conditioning training and you have got everything. It was a pro environment and that was eight years ago. The facilities and the way universities are run, they produce incredible athletes.”

This is MacGinty’s fifth season as a professional. Making his debut for the USA in the Pacific Nations Cup in 2015, it was as a result of his performances in that competition and at the Rugby World Cup that earnt him a move back to Ireland with Connacht. Winning a Pro 12 title whilst in Galway, MacGinty has now been with Sale Sharks for four years.

Still an integral part of the USA set-up under Gary Gold, MacGinty believes that the national team has improved as a result of MLR. For the first time at the 2019 Rugby World Cup, the whole squad were capable of calling themselves professional players due to the competition.

“The national team, when I first went in, it was maybe 15 lads from a 30 squad that were playing in a men’s league in America,” MacGinty said. “Those men’s club would just be training twice a week and playing a game on a Saturday. Their season would be three months long, so you are not getting many competitive games and you have got to travel across the country to play the best teams.

“Naturally with MLR, you have got 16 competitive games in the season. You are training three or four days a week, your body just becomes accustomed to the high intensity. When you step into the Eagles environment, you can definitely notice the difference and even in games we are able to hang with teams a little longer.

“We don’t fall out of a game. We are always very competitive. Usually the second half of a game is very lopsided, and teams run away and score at will against us. Slowly but surely, there is progress being made and MLR is going to be a huge factor in that.”

With the first ever MLR Draft taking place this Saturday, MacGinty and his Eagles teammates will be casting their eyes over the newest crop of challengers for international honours. Having grown accustomed to the eight-hour bus journeys to away games whilst at Life U, MacGinty believes that the draft can be a positive pathway for young players in the States.

“I think the business model is very good and it is going to take a few years for it to kick off, but even from year one to year three the rugby and the competitiveness of the games was so much better,” MacGinty said. “Obviously, you have got some players coming in from overseas, but the talent within America is getting better and better.

“A lot of players come out of college, or high school, and wonder if they go for rugby, where there was no sort of future because there was no pro game. With guys now coming out of college, there is an opportunity to have a pro career in rugby, so it will sway a few more guys to go down the rugby route.

“You have a load of lads, even in the national team, that have played rugby growing up and then have got football scholarships, don’t make it to the NFL and then come back to play rugby. They are freak athletes. Their body just needs attuning to the stamina and skill that comes with rugby. It takes a while for the body to adapt to that, but with a pro league you will see more of those players. It will be pretty exciting, as long as they keep it going.”

Sale Sharks' Paul Deacon: “We have got to try and break the cycle”