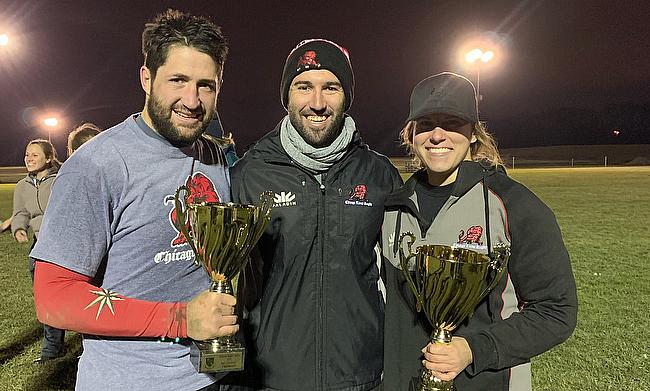 Mike Friday: Rugby still has a fantastic opportunity to grow in America
TRU Quarantine-Cast 5: USA Rugby Special
Blaine Scully: We have a lot of things we need to work on

The University of California, Los Angeles has a rich rugby history.

It is forgotten that the USA was actually once a rugby powerhouse, with UCLA at the heart of it all. Dave Clancy is the man now charged with driving the university's rugby team forward and already has good standing in the American rugby community.

Before moving to the country in 2016, Clancy served as a strength and conditioning coach for Munster, coached the Cayman Islands and had been a World Rugby educator in the Caribbean and North America. Joining the Chicago Lions as Director of Rugby nearly four years ago, Clancy established the club as one of the country’s most developed teams.

He arrived to a spreadsheet that contained just 26 names, but when Clancy left to join UCLA, that spreadsheet boasted the names of over 400 players across all teams as he helped establish a women’s team, a youth section and a second men’s senior side.

Their success during Clancy’s time left many believing that they were a certainty to be in Major League Rugby. However, after three years of the competition, Chicago remain a Division 1 side. One of the best at that.

“In the American landscape, there is no real ecosystems in the programmes like there is in the rest of the world, where there is a collaboration between men, youth and women’s and we went in with the pursuit of doing that,.” Clancy said.

“We started our women’s XV programme, merged with the youth programme, started a community outreach programme, added a second side to our men’s programme and with that, built the facilities, the infrastructure and fundraised towards that to have a facility and a temporary clubhouse, have that sense of community which allowed us to have some funds to have resources.”

Very much in the appearance of a traditional rugby club in tier one nations, Chicago’s success suggests this is something that could be rolled out to other club sides in America. That’s not to say that the side weren’t successful prior to Clancy’s arrival. JP Eloff and prop Angus MacLellan were already USA internationals when the Irishman had joined the club.

2019 was a massive year for the Lions both on and off the field! None of this would be possible without the support of our supporters, friends, families, volunteers, and sponsors. Thank you to everyone who has been involved in the organization this year, and Happy New Year! pic.twitter.com/kbJP4ofZ68

Both of those players have played in MLR since the leagues first season and more former Lions have gone on to represent sides in the professional US game. All having thrived thus far as professionals, Clancy says that the foundations were set whilst in Illinois.

“Slowly we were growing a culture where guys were rocking up to training early and doing extra work. We started attracting some good, young American talent and even some talent from overseas. I think it was very deep for them to sense that we had their interests at heart and that the Chicago Lions could be a vehicle for them to progress their careers.”

Instilling professional values into his players has meant that they have been able to maintain their status as professional athletes and Clancy has received lots of positive feedback from MLR coaches about the ease at which former Chicago players have adjusted to going full-time.

“There is a great quote from our old team manager 'You get paid to be proactive professionals, you don’t act professionally because you get paid,'” Clancy said. “Some of the feedback I got from MLR coaches was that our guys went in and there was a steep learning curve for a lot of the talent that went to MLR, in terms of recovery, self-assessment, video review work.

“Whereas a lot of our guys were quite well primed to do that. They were well equipped to go into that professional environment. We just gave them a platform to do the skills they have to do as amateur players, and I think that’s why we had quite a good success rate in terms of retained players that went to MLR.”

Now with UCLA, Clancy is coaching some of the brightest young minds in America. Only accepting students with a higher than average grade point average, only nine per cent of the university’s 120,000 applicants received places at the educational facility.

Whilst Clancy agrees that players across the country would be interested in pursuing professional rugby in America will appeal to some, there would have to be increased reward for the more academically inclined to play rugby full-time.

“We’re very highly academically focused at UCLA and a lot of the bigger schools would be that way,” Clancy said. “I think there would be ambition for some of the players to play professionally, but I think it would be more of a hobby or that kind of thing.

“They have such high aspirations outside of rugby and that could change, but at the moment the salary and the cost of living on the west coast and what they pay in MLR, it’s probably not that appealing yet. I’m sure if they were offered a contract, they would go for it, but I don’t think people see it as a career opportunity to be a professional rugby player.”

With the potential of an LA team joining MLR in the coming years, there is a chance that UCLA could be sharing facilities with a professional side, much like Rugby ATL do with Life University in Georgia. It is something that Clancy would welcome too, with the possibility of cross-collaboration with other professional coaches being a big appeal.

“Whatever collaboration it can be, in terms of coaching resources, I would be quite excited to have some other high level professional coaching staff within the vicinity to be able to have some exchanging of ideas and leaning on each other to better one another’s programmes,” Clancy said.