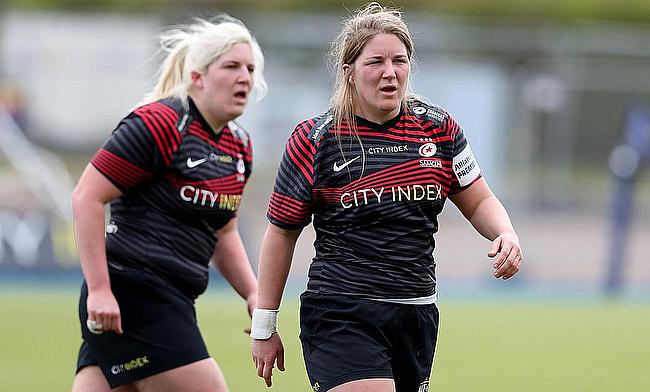 England Women dominate New Zealand with 43-12 victory
Sarah McKenna on England’s World Cup bid, combining playing with coaching and an important autumn ahead
Inside the University of Exeter pathway and why it is benefitting the Red Roses
Giselle Mather: “I am proud of our fighting mentality but there is a lot more to come from Wasps

Poppy Cleall gets the chance to lead her England side out on Sunday as they look to record back-to-back wins over New Zealand.

The Red Roses beat the current world champions with an excellent display in the first match, running out 43-12 winners, extending their unbeaten run to 15 games, and retaining their rank as number one in the world in the process.

Twenty-nine-year-old Cleall played in the second row for that opening encounter and now moves to the number eight role, where she takes over from last week’s captain Sarah Hunter who starts on the bench.

Holly Aitchison keeps her place in the centres after making a try-scoring debut, while player of the match Zoe Harrison stays in the No.10 shirt, as head coach Simon Middleton makes five changes to the team.

This is also the Red Roses’ last match against the Black Ferns before they face Canada (third in the world) and the USA, and Cleall talked about getting the chance to captain her country in front of the crowd at cinch Stadium at Franklin’s Gardens.

Cleall said: “I was shocked and honoured really, and I didn’t hesitate for a second because of course I wanted to be England captain for the game.

“When the team got put out to the wider squad, I got loads of congratulations, but it was great for them to find out and I just can’t wait for the weekend now and the last week has just been an incredible experience.”

When talking about what kind of leader she would be, Cleall added: “For me, actions speak louder than words.

“I’m lucky enough that around me there are some incredible leaders who speak so well, but for me, it’s just going to be about going out there and making sure I’m the best version of myself to lead the team and put us in the right places and hopefully put in another amazing performance at the weekend.”

Head coach Simon Middleton was impressed with his side’s display last Sunday at Sandy Park and is hoping they can continue that in this weekend’s match, but he expects the Black Ferns to come back fighting.

“I think it goes without saying that there’s going to be a reaction this weekend, but you can deal with things if you are aware of them and I think that’s one of the most obvious things that will happen”, Middleton said.

“We’ve had another week together as a side developing and preparing and we’ll meet fire with fire and make sure we do our technical and tactical bits well and that will be our focus.”

Speaking on why he has decided to make Cleall captain for the game, he said: “Like I said last week, we want to win all the games we play but there’s a great opportunity for us to develop the depth of our squad in a lot of ways, and leadership is certainly one of them.

“We know what the side looks like with Sarah Hunter as captain and we wanted to see what it looked like with someone else, and Poppy was perfectly placed to do that.

“She quietly goes about her leadership skills anyways within the group, but we just saw her as a perfect fit for this game.”

Whatever happens in the match itself, it will still be a moment that Cleall will never forget and she’ll be hoping the Red Roses can top it off with another victory over the world champions.