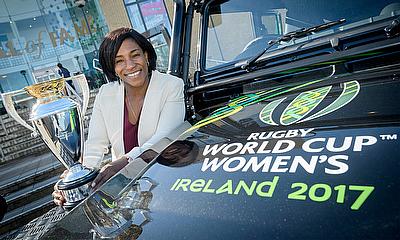 A successful Women’s Rugby World Cup in Ireland this month could be a boost to the country’s bid to host the 2023 Rugby World Cup, according to former Ireland captain Brian O’Driscoll.

The Women’s Rugby World Cup kicked off on Wednesday 9th August in Dublin, as reigning champions England cruised to a 56-5 win over Spain in the opener.

Hosts Ireland also got off to a flying start as they edged out Australia in a thrilling end-to-end game that finished 19-17 to those in green.

Ireland are battling with South Africa and France for the right to host the 2023 tournament but O’Driscoll thinks this year’s women’s competition could have a positive effect.

“I think it will certainly enhance our credentials and our credibility if we can run a good show at the Women’s World Cup,” he said.

“I think the excitement being generated in the country now is great to see and hopefully we can do the competition justice.

“It’s probably on a considerably smaller scale than what you could expect for the Men’s World Cup but you’ve got to showcase what you can deliver at any stage and I think we’re hopeful that we can do that.

“You can see with the interest levels already in Ireland and Dublin and I’m hopefully going to try and get down to one of the games in the next week or 10 days.”

BT Sport pundit O’Driscoll also spoke about Ireland’s summer tour and how the team are gearing up for the next World Cup in Japan in 2019.

Ireland demolished the USA 55-19 in June before travelling to Japan to run up two similarly impressive scores against them. Ireland won 50-22 in the first match and followed it up with a 35-13 victory in the second.

“Remember the opposition they played against, even though they have Japan in the World Cup, was opposition that you would expect to win against with a full Irish team,” he said.

“To go and do that missing some of their star players is a fantastic place for Irish rugby to be at. It’s not specifically about individuals but it’s just about driving standards.

“I think it helps with the players that managed to get caps in that process. You need a big squad to go well in a World Cup or to go and win a World Cup and I think Joe Schmidt has gone about trying to develop that.

“The more competition for places the more the standard is going to be driven. We saw on the Lions Tour that the Irish guys, particularly Sean O’Brien, Tadhg Furlong, Conor Murray and Johnny Sexton all performed really well.

“Maybe a few others feel they have a point to prove coming back from that Lions tour. You add all those into the mix on top of those who went on tour to America and Japan and Irish rugby is in good shape at the moment.

“It’s just creating 40 or 50 top quality players in Ireland where in the past maybe we had 25 or 30 but standards continue to improve.”