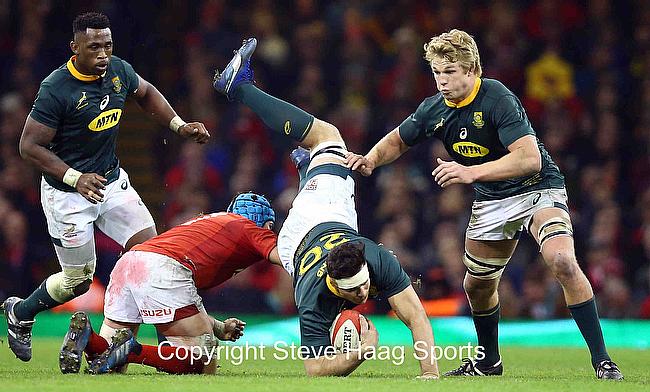 And the stage is set. After the second semi-final of the weekend, England will face South Africa in Yokohama. Wales’ 16-19 loss to South Africa now means that they will play New Zealand in Tokyo next Friday morning

The first half was a close affair. In contrast to England’s game the day before when one side was so dominant in the opening period, Wales and South Africa took some time to work one another out.

Both sides kicked to ball lots early on, testing their opposition under the high ball, trying to prompt mistakes. Neither side really made any and only when Justin Tipuric was pinged for not rolling away did South Africa took the lead.

Handre Pollard kicked the first score of the day with ease before Wales evened things up with a score of their own from the boot of Dan Biggar. Two more penalties from Pollard would follow keeping South Africa in the ascendancy.

Then two big blows for Warren Gatland’s team. First Tomos Francis came off injured after a big blow to his shoulder, then George North limped off after seemingly tweaking his hamstring chasing a free play.

From that free play, Dan Biggar kicked another penalty. Aaron Wainwright was hit off the ball, making the score line 6-9 in favour of South Africa at the break.

Both sides continued with their measured approach after the break. Kicking to one another still, Dan Biggar was offered the opportunity to even the score line. He duly took that opportunity, making it 9-9 with over half an hour still to play.

The opening try was scored by South Africa ten minutes after. Pollard, who had kicked nearly every time he had touched the ball, targeted a gap in the Welsh defence, cutting through. The ball eventually got in the hands of Damian de Allende who shrugged off the attempts of Dan Biggar to power over. Pollard converted to make the score 16-9.

Wales were by no means finished either. Making a gutsy call to scrum from five meters out, Jonathan Davies and Josh Adams linked up to put the Cardiff Blues wing over in the corner, allowing Leigh Halfpenny to kick for the posts levelling the score.

The final seconds were tense. Both sides were testing each other physically, but when South Africa won a penalty with less than 30 seconds on the clock, it was party time for the South Africans and a time of consolation for Wales.

Losing the likes of George North and Tomos Francis in the first half can’t have done Warren Gatland’s side any favours. Both are such big players for the side and it was genuinely a shame to see them both carted off so early on with injuries that could see them out of next weekend’s game.

Coming up against South Africa at the scrum must always be a daunting task. Wales faced it as head on as ever. Creaking at times, it was the scrum that got Wales over the try line for the first time in the game, not giving any yards to South Africa and giving the backs a fantastic platform to attack from.

Jonathan Davies’ return to the 13 shirt was a welcome sight too. Ruling himself out of competition last weekends quarter-final clash against France. Linking up with his wings effectively it was his involvement that got Wales over the whitewash.

It was meant to be the year for Welsh rugby. With Warren Gatland’s leaving them after this tournament, some may have hoped to see them get to the final, but it wasn’t meant to be and a tie with the All Blacks is yet to come.

South Africa, perhaps true to form, relied heavily on their forward pack to get good field position. Each penalty in the opening half came as a result of Pieter-Steph du Toit, Lood de Jäger and Duane Vermuelen’s involvement.

It was also good to see South Africa develop their kicking game. Rassie Erasmus had obviously identified that Wales would use the tactic against them and counteracted it with kicking from Pollard.

As a result neither side made too much progress early on, waiting only for the mistakes of their opposite numbers. Pollard was perhaps the man that impressed most.

Moving to Montpellier after his involvement in Japan, Pollard performed well, showing all the aspects of his games. Strong kicking ability, it was the flyhalf’s ingenuity that led to the opening try. Identifying the space, Pollard’s break eventually lead to Damian de Allende’s try, putting the game in South African hands