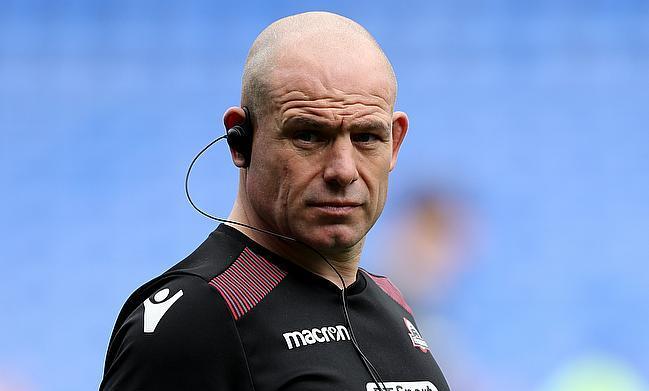 Ahead of their World Cup semi-final with New Zealand, Richard Cockerill says England can overpower the All Blacks on Saturday.

Richard Cockerill never took a backwards step as a player when he was hitting the heights with Leicester Tigers and England - and the current Edinburgh Rugby head coach has backed his country to defeat the All Blacks on Saturday in the World Cup semi-final.

As a hooker, Cockerill was always combative as he won 27 international caps between 1997 and 1999 and he is remembered for facing up to the Haka at Old Trafford when England played New Zealand in just his fourth cap.

As New Zealand’s players began to get into place for the Haka in Manchester in November 1997, Cockerill stood just inches away from opposing hooker Norm Hewitt and the former remarked in a previous interview “it was one of my first Test starts and I was a tad excitable”.

He also said about that moment before a 25-8 loss that “it was a bit of red mist, a bit of aggression and let’s take it to them” - and he expects the current England side to ‘take it to the Kiwis’ in the International Stadium in Yokohama at the weekend.

England have not beaten New Zealand since a 38-21 victory at Twickenham seven years ago, but Cockerill told TRU: “Do I fancy England’s chances? Yeah, 100%.

“They are the two best teams at the moment, but England are more than good enough to beat New Zealand. They’ve got an all-round power game to do it.

“England are a very good side, but, then again, if New Zealand get it right, then they’ll be more than good enough to beat England, so it’ll be a great game.

“Purely from a rugby point of view, I’ve got to be honest and say England v New Zealand would be better as the final.

“Now it’s down to the four big teams. These are the teams that know how to win games and they can all win games in very different ways.

“It’s been a great tournament so far. The Japanese people really seem to have embraced it and taken it to their hearts with their own team having done so well.”

“The Haka is a special thing for New Zealand, but I reckon you should be able to stand a metre away from them if you want to”

Former England back-rower James Haskell caused a bit of a stir on Tuesday when he wrote in his Daily Mail column about the Haka “it's 15 blokes dancing! It was like a red rag to a bull with me”.

And while Cockerill got up close and personal with Hewitt during the ceremonial challenge pre-match 22 years ago, he believes it is a “special thing” and must continue.

“As a player, I always looked forward to facing it. My first time, I was probably a bit closer to it than I should have been, but it’s something that should be celebrated. I believe there’s as much psychological edge to be gained from facing it as there is doing it.

“It clearly means a lot to New Zealand, which is fine. Is it an advantage for them? I don’t know. The All Blacks used to get so psyched up doing it that they’d start games very poorly. They’ve had to do things around that to manage it.

“For me, I think it should be respected, but I also don’t think that you should have to stand 20 metres back from it and just watch them.

“There obviously doesn’t need to be physical contact, but it is a war dance ultimately and it is a challenge that they’re laying down to you.

“They’re calling on their mana and their forefathers to come and help them and take the strength from the earth.

“I reckon you should be able to stand a metre away from them if you want to. You shouldn’t just have to stand their 20 metres away. It’s a challenge to go into battle.”

While he will be glued to his TV screen on Saturday morning to watch the big match coming in from Asia, Cockerill’s main focus this week is preparing his Edinburgh squad for a tough Guinness PRO14 match at home to the Scarlets on Saturday evening.

The Welsh side will arrive at BT Murrayfield unbeaten while Edinburgh have won two and lost one and used the fallow week just gone to get over their 40-14 loss at Leinster in round three.

With Scotland having returned from the World Cup earlier that they would have liked, the national team players are back at home and some are set to feature at the weekend.

Of the three Cockerill mentioned in his press briefing on Tuesday - Magnus Bradbury, Henry Pyrgos and Blair Kinghorn - who are likely to go straight back to club action, the former is the most surprising.

He played in Scotland’s last three Pool A games after being a late call-up to the squad at the showpiece event due to injury, but his club head coach obviously feels the 24-year-old is ‘good to go’.

We're ready for @scarlets_rugby. Are you?

As to when Edinburgh supporters can expect to see others like Stuart McInally, WP Nel, Simon Bergan, Grant Gilchrist, Ben Toolis, Jamie Ritchie, John Barclay, Darcy Graham and Fijian Bill Mata back in domestic action Cockerill stated: “It will be on an individual basis.

“Some guys are having a bit more time because they feel they need it.

“After World Cups, long tours and Lions tours guys react differently, so even some guys that haven’t had a huge amount of game time need a bit more time away from rugby because they’ve been together four months, they’ve been away from home, they’ve been living in hotels.

“Some of that’s not just the physical part, it’s the emotional part of getting them fresh mentally to come back and play what’s going to be a big season.

“It’s not an easy tour after a World Cup year and a Six Nations. We’ve got to be careful that we manage those guys correctly.”