Simon Amor: "We really want to go at this Welsh team" 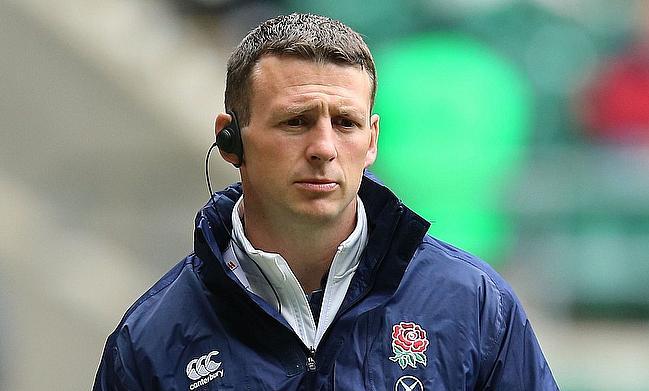 Adam Jones Interview: It's going to be a matter of time before Harlequins’ England stars get their chance
George North’s new lease of life can help Wales seal Triple Crown
Wales have 'found their feet' under Wayne Pivac as England aim to take steps forward
George North set for 100th Test appearance for Wales

Since being appointed as England’s Backs Coach just over 12 months ago, Simon Amor has only ever experienced victory against Wales.

At Twickenham last March, the likes of Anthony Watson, Elliot Daly and Manu Tuilagi all crossed the whitewash in a 33-30 win whilst the boots of Owen Farrell and George Ford did the rest.

Despite registering a victory, the game left much to be desired as an ill-disciplined England finished with 13-men on the field following Ellis Genge's yellow card and the sending off of Manu Tuilagi.

Fast forward eight months and England would beat the same opposition 24-13 at the Parc y Scarlets in the Autumn Nations Cup.

Again, it was far from a perfect performance from  Eddie Jones' side and it is largely the same backline that will be taking on Wales on Saturday afternoon - with Watson being the only expectation following his excellent display against Italy last time out.

“We really want to go at this Welsh team,” Amor said. “They are going to bring their intensity, they are a very, very experienced side. They have got some very, very combative players and we are well aware of that and it is about really taking the game to them and that is the challenge.

Red cards, tries, some... questionable behaviour, it all happened this afternoon.

If you missed England's win over Wales earlier, @joeharvey34 has reviewed events at Twickenham below:https://t.co/TxvoWv49WM pic.twitter.com/LPLE5Vn4W6

Wales will be a much different prospect from the side England faced in the autumn, and the starting XV which Wayne Pivac has selected is the most-capped Welsh team ever.

Josh Adams comes back onto the wing, George North will win his 100thcap for his country at outside centre whilst Jonathan Davies returns from injury to start at inside centre.

“It is a very experienced backline,” Amor said. “We can see that those two centres are outstanding, world-class players and are a very physical backline as well.

“We have to understand that physical challenge and we have to match it and beat it so it is a great opportunity for our boys to go up against what is an outstanding Wales team.”

England have come under fire in recent months for their attack, the team opting to kick the ball regularly and trying to overcome opposition thanks to a heavily territory-based way of playing.

Against Scotland, Jones' side looked hapless at best, the backline starved of possession for much of the 80 minutes and they looked uncertain of what to do when they finally got good service.

When playing Italy last time out, with Owen Farrell at inside centre and George Ford at fly-half, the backs were given more time with the ball in hand and having the extra distributor in the midfield seemingly made a huge difference.

That axis of Ford and Farrell has been a staple for England since Jones first took charge of the national team in 2016, with Amor saying the pair’s connection provides a different aspect to the way they play.

“There is always pros and cons in terms of how you pick your team and the benefit that George does at 10 over Owen playing at 10. These two do work very well together, they have a very good connection.

“As well, having those two kicking threats, Henry Slade is a kicking threat as well. It provides a different dynamic to our backline.

?? England attack coach Simon Amor has been speaking to the media ahead of England v Wales and there is disappointing news for @Courtney_Lawes.

Get more quotes from Amor and the latest news in Test Talk ?#WALvENG #GuinnessSixNations

“Certainly with George this weekend, he has been excellent in training and the way they have trained together, both in terms of our Wednesday and Tuesday sessions, they have had a really strong cohesion and connection there so that is really pleasing.”

As mentioned previously, the topic of attack is something that has filled plenty of column inches. During the Autumn Tests, Jones, his coaches and players were steadfast in their messaging that the team are developing a unique brand of rugby which they hope to unleash close to the 2023 World Cup in France.

Amor is the man charged with the development and implementation of this dynamic system. He says following the home loss to Scotland, the team had to adapt with players working hard to correct prior mistakes in training ahead of their latest challenge.

“A couple of things [have changed], probably a bit too complicated initially,” Amor said. “We probably didn’t quite get the right simplicity and the right message there I think so that has certainly improved in the Italy game.

“We have worked hard upon that, that understanding, over the last week and the boys really have stepped up so well. They have really worked hard. Our last passes haven’t really stuck, so again, that is another area for us to work on, that we have been working hard on and our general intent, our intent to really go at people.

“That has been a really big focus for us over the last week, so really pleased with the way everyone has worked hard on those areas and the progress we have seen so looking forward to the weekend.”