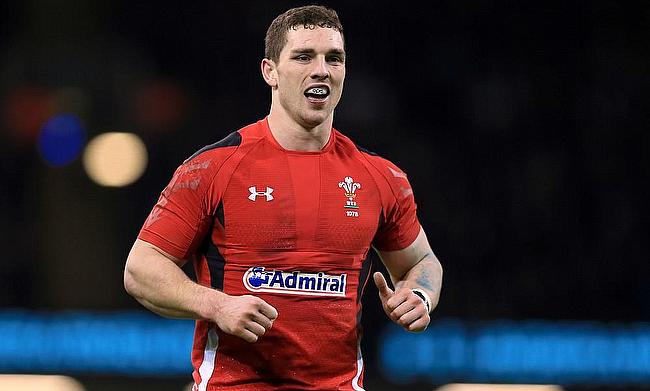 Wales are two from two in this year's Guinness Six Nations and are on their way to sealing the Triple Crown on Saturday.

However, Eddie Jones' side are hoping to steal their thunder and make Elliott Daly's 50th cap a memorable one at the Principality Stadium.

England sit third in the table on six points, with Wales three points ahead of them and the hosts are also aiming for a third successive win in Cardiff.

Fit-again George North is set to make his 100th appearance against the English this weekend and he’s the youngest Welsh player to reach a century of caps for his country, which is no mean feat.

"George has got a new lease of life, I think,” Wales head coach Wayne Pivac told the press on Thursday.

“The challenge of moving him to centre has also excited him. He had a couple of weeks in the autumn where we saw him play club footy and he's responded really well to the challenges we've put in front of him and that speaks volumes of him as a player. He's still a highly motivated player and still wants to play over 100 games for Wales. I'm sure he's going to do that with the attitude he's showing at the moment.”

Despite being classed as the underdogs in the build-up to this historical fixture, when asked what Pivac thought of Eddie Jones' selection this weekend, he knows it won't be an easy task.

"Like every competition, they're going to grow like all sides,” Pivac continued. “Having lost their first game, it makes them even more dangerous just because of the pressure that comes on them in this particular match. They won the Autumn Nations Cup and they have a very successful history as well as winning last year's Six Nations tournament so we know they're the team to beat and pose a very big challenge.

"However, we've won our first two games and that has given us confidence. We've put in some good performances, but we know we're not the finished article and we've got work to be done.

“This game for us will be a very good test to see that rate of improvement and we'll certainly be looking forward to that. We need to make sure we play well for the full 80 to make sure we have a chance to get the result.

“Obviously, if we have our first 20-25 minutes like we did in Scotland, we'll be out of the game so we're well aware of the threat England pose and they are a very good side that keep on improving like all sides. We know that means we will have to play well over the full 80 minutes on Saturday and concentrate on ourselves as a team".

Before the Six Nations began, Wales had lost 10 of their 13 games under Pivac and they struggled to find any sort of form. When asked how he felt heading into this fixture with two wins on the bounce, the head coach seemed fully focused on his team producing an 80-minute performance.

“Nothing changes really, but a lot of hard work goes in and we're trying to focus on the here and now. There's obviously a Triple Crown up for grabs this weekend which is exciting but for us. It’s another big step forward and if we can put in that 80-minute performance that we want, then we'll get our hands on that Triple Crown."

Jones' team have been called 'predictable', particularly in attack in recent weeks, and fans have been frustrated by the lack of opportunities handed to the younger players.

Both teams have been battling it out since 1881, and despite the 65 occasions that England have won on, Wales' pack will be hungrier than ever to rip into a side that has been a bit hit and miss in recent weeks. You don't want to miss it.