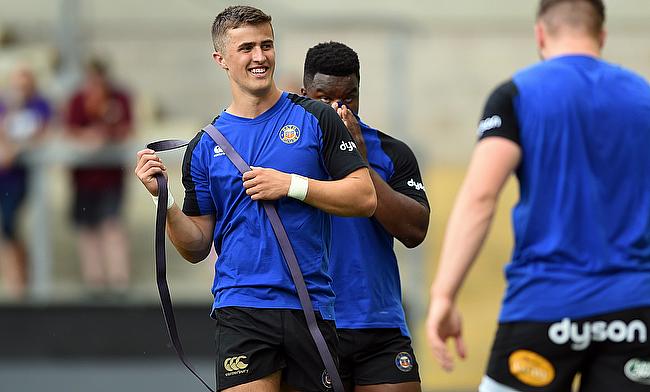 Ben Spencer misses out as England name 26-man training squad
Jamie George: There are certainly similarities to Japan
Eddie Jones: 'Our job is to put smiles on people’s faces'
Eddie Jones reaffirms his commitment to England as they look to the future

The duo were both named in Eddie Jones’ 26-man squad which was released on Thursday evening, but de Glanville’s club team-mate, Ben Spencer, was a notable omission despite a string of impressive performances.

Including de Glanville and Lawrence, there are 12 uncapped players in the current England set-up and Amor is keen to see two of the latest arrivals thrive in their new surroundings.

“They [de Glanville and Lawrence] are very talented guys with an awful lot of potential,” said England’s attack coach. “I think we are excited in what they can do coming into camp and what’s really important is not for them just to experience the camp, it is to really attack the camp.

“We know that Ollie Lawrence has got a really good attacking game. He has a strong running game, he’s a good physical player as well so we are looking to see that transfer into our camp.

Join Eddie, the squad and special guests from Twickenham at 10am on Saturday as we bring you O2 Inside Line LIVE from training ??

“And we know that Tom de Glanville has shown some really good examples and some wonderful counter-attacking. I have been impressed by the maturity of him and his inner drive. He is at the start of the journey effectively, and he has got a lot to learn, but we want to see these young people not be satisfied with being in camp, but driving and attacking the camp and pushing for selection.”

England’s autumn schedule begins against the Barbarians on October 25th at Twickenham before Jones’ side travel to Italy for their Six Nations clash, so a successful camp for de Glanville and Lawrence could see them feature on the international stage over the next few weeks.

De Glanville and Lawrence could be jostling for a spot in Jones' plans alongside the likes of Joe Marchant, who will also be eager to showcase his talents after returning to Harlequins in the summer following a loan spell over in New Zealand with the Auckland Blues.

"I have had quite a lot of conversations with Joe since he came back and a few whilst he was out there, just trying to understand what he had learnt and for my learnings as well.

“Undoubtedly, he picked up an awful lot from that environment and he definitely feels there have been definite improvements to his game as a result. The challenge now is how does that take a step forward in the Premiership and in Test match rugby so that’s his focus going forward.”

Amor, who became England’s attack coach back in January, admitted he used the lockdown period to share new ideas with his players, especially when the sport resumed in the southern hemisphere.

New Zealand became the first major rugby nation to return to action following the outbreak of Covid-19 and Amor said he was able to develop his own learnings by watching Super Rugby Aotearoa.

Eddie Jones says England's job is to "put smiles on people's faces" over this autumn window after a difficult period for the sport + he hopes his players can embrace the responsibility of representing their country...https://t.co/1SxjMwIV4D pic.twitter.com/bBYghzdH1k

He added: “The opportunity during lockdown was to reflect on what we had done previously of course, but to get real clarity as well about our game model going forward.

“We spend a lot of time as coaches looking at that, but with the change in the laws, then came another opportunity when the game started again down in the southern hemisphere and you could see the potential for a faster game coming.

“What does that do? Well, it creates more opportunities in terms of the attacking game. If you can get that quick ball, how can you think quickly? How can you attack quickly?

“That comes into how we train as well so it is a great opportunity going forward for our team as a whole to be more instinctive and to play very, very fast. It is exciting where the game could go over the next few years.”

For now, England’s focus will be on their upcoming fixtures as they target the Six Nations title as well as a successful Autumn Nations Cup campaign, which begins in November.

Jones’ side haven’t played an international match since they beat Wales over seven months ago, but Amor hopes England can continue to take steps in the right direction during this next block of games.

“We all feel so blessed to be in this position of being involved with an England team, the opportunity to go to Twickenham, the opportunity to put smiles on people’s faces so it is a massive focus and drive for everyone in the programme to keep everyone smiling around the country and to keep on playing a great brand of rugby that keeps progressing so we can be the best team in the world.”