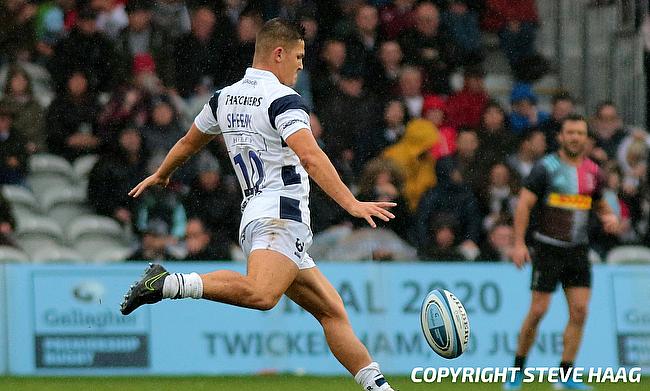 Callum Sheedy contributed with eight vital points as Bristol Bears edged out Worcester Warriors with a three-point victory in the 11th round of the Gallagher Premiership at Ashton Gate.

The low scoring encounter saw Pat Lam's side score 10 unanswered points in the opening half but despite Worcester suffering two yellow cards in the second half they narrowly went past the line with Sheedy's decisive penalty kick that came in the 70th minute.

After the opening quarter went without a point, Sheedy started the proceedings with a 22nd minute penalty goal and the stroke of half-time Luke Morahan crossed over for the opening try after good work from Harry Randall. Sheedy's conversion ensured Pat Lam's side finished the first half with a 10-0 lead.

Worcester started the second half strong as Nick David crossed over on what was his second try in as many games while Weir kicked the extras to reduce the deficit to three points. By the 57th minute, the Warriors lost Cornell du Preez to yellow-card for a high tackle but the home side did not find any breakthrough despite the numerical advantage.

A penalty kick from Scott van Breda in the 68th minute helped the visitors level the scores but they suffered another setback immediately with Andrew Kitchener sin-binned for an infringement at breakdown and this time Sheedy's 70th minute penalty kick ensured Bristol sealed a thrilling win.

“It was a good win. I think when you look at this time lost year we lost to them twice and the reason is they play a certain type of rugby," said Bristol director of rugby Pat Lam.

“The plan was to deal with the physicality and the boys did that. The game was getting tougher and tougher and we just had to grind it out.”