Sebastian Negri Column: We showed why we deserve to be in the Six Nations against Ireland 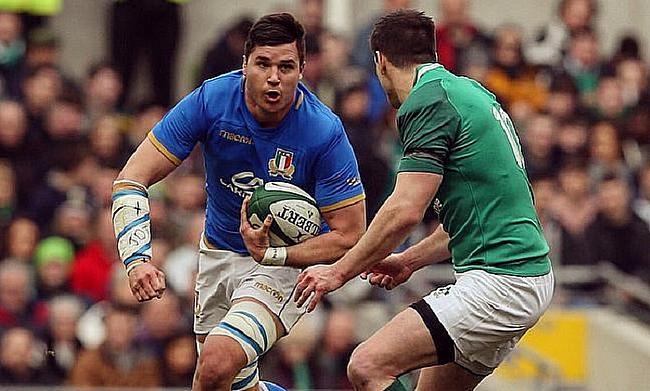 Second half comeback help Ireland overcome Italy with 16-26 win
Sebastian Negri Column: The word I would use is surreal. I am living a dream
The Journey To Italy: Polledri, Negri and Sisi
Randall magic helps Hartpury seal the double

In his third column for TRU, Italy’s Sebastian Negri talks about their encouraging display against Ireland, fond memories of Twickenham and the Azzurri’s aims for their remaining fixtures in the Six Nations.

Back in the game

I was obviously gutted to miss Ireland. I picked up a virus. It is never nice to get pulled a few days before the game, but Conor [O’Shea] made the right decision and said I wasn’t ready, which I wasn’t. I am now raring to go and looking forward to the challenge against England. I am happy to be back in the group!

Ireland performance sent out a message

We showed why we deserve to be in the Six Nations against Ireland. People can say they weren’t at their best and things like that, but ultimately, we put them under pressure and forced them to make a lot of errors.

We are proving to everyone that we are not just challenging teams, but we are putting teams under pressure. What is disappointing for us is that we haven’t got that win yet which we are really chasing.

Conor has spoken about it this week and we don’t just want to be competitive. We are heading in the right direction and we have shown every single week since the Scotland game, that we are building. We have played some good rugby so there are lots of positives to take into this weekend.

The challenge of England

We know it is going to be a different challenge away in England against a team that is hurting a bit after their loss to Wales. They are going to come out with a reaction, especially in front of their home fans. The pressure is on them to do what they need to do and they will want to send out a message.

We are expecting a big physical challenge up front. For us, we are going to build on the Ireland game and enjoy the challenge. That has been the message this week.

We can’t really focus on what England are going to do. It is about focusing on ourselves. We know how we can create pressure, as shown against Ireland, so we just want to be physical and concentrate on what we can control. We want to be disciplined in what we do and we are positive in our own ways.

Again, it is what dreams are made of to be involved in a game at Twickenham. The last time I was at Twickenham, I was involved in BUCS Super Rugby with Hartpury. Some of the boys have been giving me the gears about the return!

It is very surreal that a couple of years later, I am involved in a Six Nations game against England so I am really looking forward to it.

https://t.co/VyDBCWKyLK #EmergingTalent Seb Negri on life with Hartpury, his supportive family, Italy and his move to Treviso pic.twitter.com/O22C3lzRVN

I have such great memories with a great group of guys at Hartpury, but of course, it will be a completely challenge on Saturday. Mum and Dad will be there, as will a few close friends, so it will be very special.

Jake [Polledri] is also back with us which is annoying because he is my roommate! Normally I am with Dean Budd or Bramm [Steyn], but they put us Hartpury boys together!

Seriously, it is great to have him back. He adds great value and he is a good friend of mine. We all know his qualities. It will take a bit of time for him to get back into things because he has been out for a while, but he will be back involved in no time so we can see the best of Jake Polledri that we all know.

‘At the end of the day, it is a results-based business’

We are definitely looking at these two games [against England and France] to try and pick up a win. We are knocking on the door so hopefully it can all come together. We want to give our fans something to cheer about.

It has been a long time coming as everyone knows, but we are heading in the right direction and it is clear for everyone to see. We have really held our own in this Six Nations and challenged, but at the end of the day, we know it is a results-based business and we really want to get that win