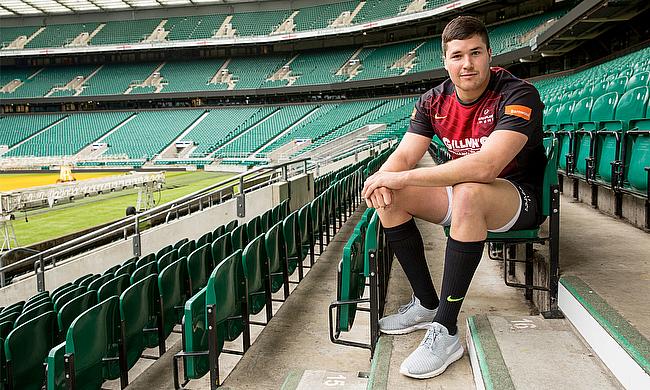 Seb Negri has been a standout performer for Hartpury College in his final year at the club and he speaks to TRU about life in Gloucester, his upbringing in Zimbabwe and his move to Treviso in Italy.

“It was the proudest moment I’ve ever had” says Seb Negri.

A young man who was the joint player of the year in this season's inaugural BUCS Super Rugby campaign has just summed up a match in his season; a season that has helped him take the next step in his career.

It is the BUCS Championship Final at Twickenham, the pinnacle of university rugby. It came just under a month ago when Negri led Hartpury College out at England HQ as they went in search of a league and cup double.

With just 20 minutes to go in that match against Exeter, Negri’s side were trailing. They had clinched the league title a few weeks earlier, but they weren’t playing like champions. 20 minutes later, they were celebrating more glory as they clinched a 27-24 win.

“It has been a historic season,” Negri says. “When you have success at Hartpury, you really feel honoured and it is a privilege to be at an institution like this where they take massive pride in what they do.

“At the start of the season, we talked about a winning culture and that is clear for all to see throughout the squads at this club. I think is the start of something special at Hartpury.”

Negri’s career seems to be flourishing after university success, but this is just the beginning. If the forward was one of the standout performers for Hartpury’s university side this season, then expect him to continue to improve as he gets ready for the next chapter in his journey.

Signed by Benetton Treviso just before Christmas in 2016, Negri is now preparing for life in Italy as his three years at Hartpury College studying Sports Business Management is coming to a conclusion. “It is very special to end on such a high note and I couldn’t be prouder,” he added. “It has been my main focus to concentrate on Hartpury since signing with Treviso and I just wanted to add to the success they have already acheived."

The 22 year-old also speaks very highly about how lucky he is to have such a supportive family during his time at Hartpury. He says: “For me, they are the most important thing in my life. From when I started playing, I just want to make them proud and it was great to have them there at Twickenham last month.”

It might seem like Negri is now living his dream and that would be true, but it has been far from a smooth journey for him and his family.

Negri was born in Zimbabwe and was brought up by parents Diana and Janusz who also raised Negri’s siblings - brothers Josh and Thomas as well as a sister, Daniella.

At the start of the millennium, Negri and his family were forced to leave the country during land invasions and it left them with nothing. They moved to South Africa which, for a 10 year-old Negri, was a huge change but he looks back at that harrowing experience and takes positives from a tough upbringing.

“We had three farms and we lost them overnight so it was a big shock and upsetting for us, but it is how you bounce back from those difficult years which why is I look to my parents as role models. You lose something, but you have to try and respond and that can apply to rugby too.

“You may not always get the rub of the green or get selected for a side. You are always going to have disappointment, but it is how you react and how you show your character. When we moved to South Africa, there were obviously a few ups and downs, but it turned out to be the best decision we made as a family.”

Negri began his playing career with Hilton College in South Africa, via a season in Cape Town with the Western Province Academy before he and his family had to make another big decision. His brother Tom is now a rugby agent in the capital of South Africa, but he attended Hartpury and guided Negri to Gloucestershire for the next step in his career.

“I still had opportunities over in South Africa to play, but I just felt Hartpury was the perfect fit,” admits Negri. “It just seemed the right decision in terms of getting a degree and furthering my rugby.

“When I moved to Hartpury, I was all by myself and didn’t know a lot of people. But the people here across the club helped me settle in and it is a family environment. The teammates I play with here have been brilliant and this year sums up how special Hartpury is.”

The way Negri speaks about Hartpury College just highlights how fondly he regards this institution and you can't blame him if he hasa heavy heart when he swaps Gloucester for Treviso next season. He signed a two-year deal with the Pro 12 side at the end of last year and considering he has already represented Italy, (because of his parentage) it may also have helped his decision to begin his professional rugby career abroad.

“This year Treviso were in the Challenge Cup group with Gloucester,” he says. “I actually spoke with Kieran Crowley and he had a lot of good things to say to me about the club. I see Treviso as another step forward in my career and hopefully it is a way for me to try and get back into the international side.

“It was also a good fit for me going back over to Italy because it is a country which has given me so much already in such a short space of time. So when I left school in South Africa, Italy have always been there. From U20 onwards, they have given me a lot, so to go back over there is great.”

He talks with passion about his time with the Azzuri last year when he represented the Italy ‘A’ squad against Uruguay and Argentina before receiving a call from Conor O’Shea to join the senior set-up on their tour of north America.

“It is something you dream about as a boy,” he says avidly. “There I was, with the Italy ‘A’ side watching the main side play against Argentina and you’re watching some of the players which you look up to and suddenly you are thrown into the mix.”

Negri now hopes he can taste that experience again as soon as this summer as he aims to be involved with Italy or Italy ‘A’ before joining up with Treviso in July.

“Still to this day, playing for Italy is something I am very humble about and proud of. Just to get that foot in the door is something special and it was one of the best days of my life for sure.”