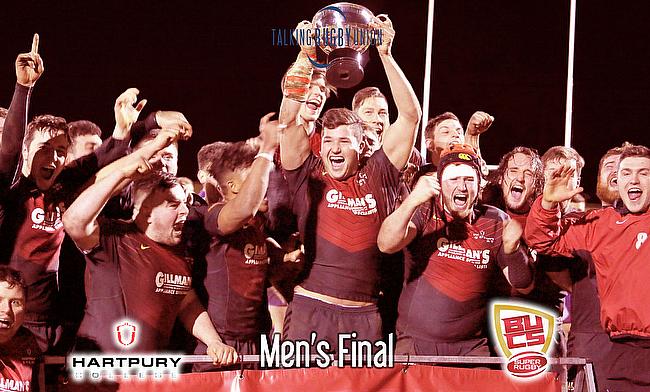 Ahead of the BUCS Men’s Championship final at Twickenham on Thursday, we will be profiling and previewing both Hartpury College and Exeter as they prepare to battle it out for the biggest prize in University Rugby.

Here is our first preview of the week; starting with BUCS Super Rugby Champions Hartpury College.

Hartpury College have had a remarkable season. Their National One side have romped to the league title with four games still to play while their BUCS side has also created another piece of history.

Head Coach Sean Lynn and Director of Rugby John Barnes guided College to the BUCS Super Rugby title in its inaugural season as they secured 12 wins from their 14 matches in the domestic campaign. The Gloucestershire side finished on 57 points and picked up nine bonus points along the way. Hartpury lost just twice all season – against Exeter and Loughborough – but they are now back at Twickenham after a three year absence aiming to clinch the league and cup double to add to their growing trophy cabinet.

In the knock-out stages of this season’s BUCS Rugby Championship, Hartpury faced Leeds Beckett in the quarter-finals and edged their way into the last four of the competition after a narrow 21-19 victory. They came up against Bath in the semi-finals and after a cagey first-half performance; College produced a solid display in the second period to seal a 26-20 win to reach the final.

College won two championships between 2012 and 2014, but failed to add anymore silverware to their name after suffering semi-final defeats against Leeds Beckett and Loughborough over the last two years. Now, they are back at Twickenham and Hartpury certainly have the talent to end their wait for their next championship. Players such as Jonas Mikaclius, Harry Randall and Sam Leeming are at their disposal along with England Students stars Alfie Barron, Harry Cochrane, James Forrester, Luke Stratford and Mike Flook while Seb Negri has led the team superbly. Can Hartpury College secure the league and cup double to add to their phenomenal year?

Inside the Hartpury College camp

Hartpury Director of Rugby John Barnes: “The semi-finals are always pretty tough and the boys did well to win it against Bath.

“I thought Bath played exceptionally well in the first-half and they probably deserved to be a few points ahead, but we managed hang in there. We had an excellent first 20 minutes of the second-half to get the lead and managed to hold on to that to get the win.”

"It has been an outstanding year for senior rugby at Hartpury. Our National One side have won the league and been promoted to the Championship and the BUCS guys have followed that up by winning the inaugural Super League. It’s a superb achievement in a really tough league where all 14 matches are of a high quality. We have managed to get to Twickenham with a chance of doing the double which is a great effort by the side.

“It is a massive effort needed for the final. To get to Twickenham is great for the guys who have not been there for a few years, but we all know that at the end of the day, it’s about winning things. We’ve won the league and now we want to win the cup to clinch that double.

“Exeter are a very good side. We beat them at home in the league and they beat us very comfortably at their place so it’s almost like ‘1-1’ if you like. They are very well coached and very well drilled so it will be a hard task. They produced an outstanding second-half against Loughborough in their semi-finals so they will be full of confidence that they can retain their title."