Seb Negri Column: To be part of a World Cup is special 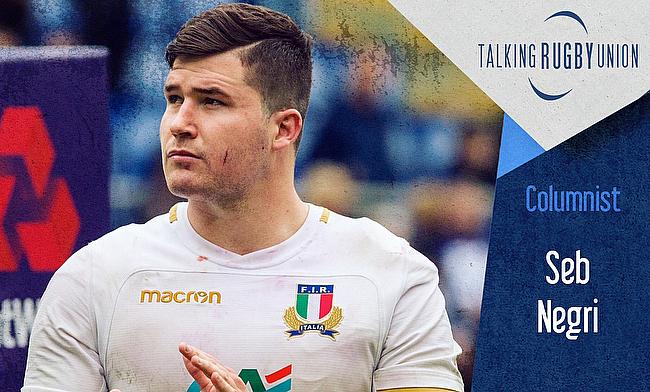 Italy begin their World Cup on Sunday and the Azzurri’s Seb Negri is excited to be heading to Japan. Here is his first column of the tournament.

As a boy you dream about these things. When I got that call to say that I was going to Japan, it was a really proud day for me and my family.

I’m getting goosebumps just think about it. I’ve always watched World Cups as a young boy growing up, so to be part of a World Cup is something extremely special and something that I’ll hold close with me for the rest of my life and something I will show my kids one day.

We’ve been in camp for nearly four months now and I’d be lying if I said it hasn’t been tough.

Week-in week-out, with all the travel and preparations for games, that is not an easy thing but, we know what the goal is and to get on to that plane and go to Japan is a dream come true for not only me, but a lot of the boys. Hopefully, I can go over there, make my family and friends proud and enjoy every single moment.

I think it’s also very special to be part of the group of foreigners in the team. Myself, Jake Polledri and Callum Braley obviously have that Hartpury and Gloucester connection.

It’s special and we’ve got a great group of guys here as well as a great team. Those relationships are important because it does help your mentality off the field. Especially in tournaments like the Six Nations when things don’t always go your way, so I’m very lucky I guess.

Conor said to us the other week that we could have played teams that we could have just put to the sword. Instead we’ve been put to the test against big, strong, physical teams, in Ireland, France and England. In Japan we will be challenging some of the best teams in the world and that can only prepare us well for what is coming.

Not only are we playing South Africa and New Zealand when we get to Japan, we are also playing Canada and Namibia who are two physical sides, so our preparation has been really good. Last November facing the haka would probably be the pinnacle of anyone’s career.

Again, that is something you watch as a boy growing up, so to do that again after our Test against them last November, will be something that I’m really grateful to have the opportunity. I’m blessed and hopefully we will make some good memories in Japan.

There were a lot of positives to take against England

After we played England, it would be fair to say that the result was a little disappointing. I thought for the first 40, maybe 50 minutes, we were in the game and there were a lot of positives to take to Japan with us.

If we forget about the score line, we can take a lot of positives from the game. We fronted up physically, the physicality wasn’t quite there when we played France and I think we showed against England that we can front up physically, as well as match the skill level of a team like England which is fantastic.

On another day we could have got the bounce of the ball, kept some more patience in the oppositions 22. Sometimes that will come to us and hopefully one day soon it does, but as I said, there were positives to take forward. It was a step in the right direction and we got a lot of bumps and bruises at St. James’ Park, but we will dust ourselves off for our first World Cup game against Namibia.

“We know the challenges ahead, but we are also confident in our abilities.”

Last season with Benetton, I think we showcased where Italian rugby is going and if we can try to transfer that form from club level to the national team, that would be something really positive. It is all well and good talking about it, but it does need to be done. I can’t fault any of the Benetton staff and the setup there is fantastic.

When you hear it's just TWO DAYS until #RWC2019 kicks off! pic.twitter.com/MwGI2aKDIS

We’ve learnt a lot this summer. We’ve tried and tested different little things, but it has all really been focused on ourselves and on our long-term goal of trying to make it out of our pool, which is going to be difficult.

We know the challenges ahead, but we are also confident in our abilities. We’ll focus on one game at a time; Namibia, then Canada before the big one against South Africa, before a massive game against New Zealand. I’m just excited for it all.