Scotland resist second half fightback from Samoa to win 44-38 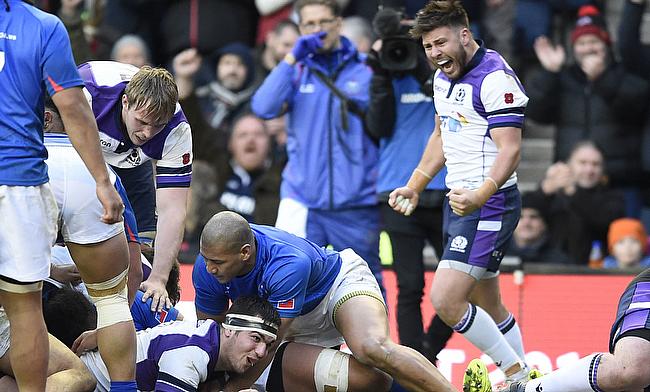 Scotland managed to resist a second half resurgence from Samoa as they kick started their autumn international campaign with a 44-38 win over Samoa at Murrayfield Stadium.

It took Scotland just one minute to score their opening try with Stuart Hogg capitalising on a kick from Finn Russell going past the line and the fly-half added the conversion as well. Samoa, who were under the news earlier this week when their rugby union were declared bankrupt responded back with a 11th minute penalty from Tim Nanai-Williams but his efforts were negated by Russell, who kicked a penalty of his own three minutes later.

Just as Russell booted his second penalty to take Scotland's lead to 10 points, Scotland hit back with a brilliant try from Josh Tyrell, who crashed past the line from close range and Nanai-Williams' conversion brought down the gap to three points.

However, the Dark Blues showed a lot of intent in the closing stage of the first half as Huw Jones went through Paul Perez to score the second try and shortly man of the match Stuart McInally went over following a well driven line-out as Scotland went into half time with a score of 25-10.

McInally carry forwarded the momentum into the second half with his second try in the 45th minute and Russell was spot on with the conversion once again to stretch the lead to 22 points.

However, Gregor Townsend's side looked scratchy from there on and Samoa quickly capitalised on it as Piula Faasalele (49') scored a try but the real turnaround came from Nanai-Williams who kicked the extras and also followed it with a converted try and suddenly it became an eight point game leading into the final quarter.

Scotland finally managed to turn it around when Lee Jones collected a kick from replacement Pete Horne and offloaded to Alex Dunbar, who went past the line but Samoa were unwilling to relent as Kieron Fonotia scored their fourth try and the gap between the two teams came down to six points as the final 10 minutes kicked-off.

Capitalising on a terrific pass from Cornell du Preez, Horne went past the line and also slotted the conversion to provide Scotland a breathing space and despite a 76th minute touchdown from Ofisa Treviranus, Samoa went on to lose the game by six points.