Jones hoping England’s physicality will give them edge over Ireland 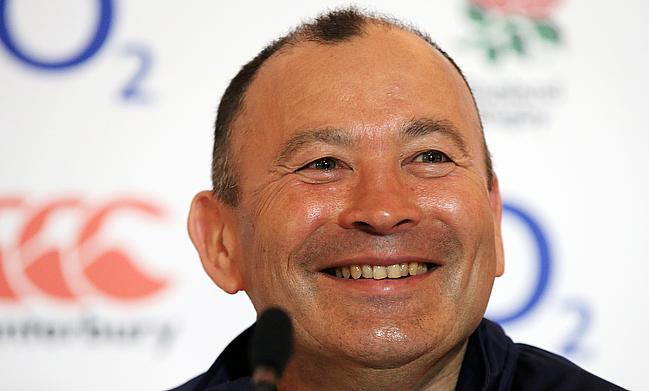 Highest Score in Six Nations history
Sam Simmonds, Joe Marchant to start for England for game against Ireland
Johnny Sexton returns to starting line up as Ireland confirm team to face England
The Most Memorable Moments in Six Nations History

“What I do know is, they are red-hot favourites,” Eddie Jones said at Thursday lunchtime.

Whilst Eddie Jones might be changing his regular coffee shop stop, the Australian is hoping that England’s physicality will be enough to counteract an Ireland team that are currently second in the Guinness Six Nations table.

Five weeks on from using the phrase ‘red-hot favourites’ when describing Scotland ahead of the Calcutta Cup clash that opened up England’s campaign, Jones has dusted off the tagline again ahead of hosting Ireland in West London.

Mind games or not, branding his side as underdogs ahead of their game in Edinburgh didn’t work.

Since that weekend, England have won the two games that have followed, their wins against Italy and Wales keeping the side well in contention for the championship.

For Saturday’s game, England have had to adapt to injury, with Jamie George taking the starting hooker spot from the injured Luke Cowan-Dickie, Newcastle Falcons' Jamie Blamire taking a spot on the bench as a result.

Prior to England’s last encounter, the starting back line was thrown into disarray as a result of Many Tuilagi sustaining a hamstring injury in camp. As a result, Elliot Daly started at outside centre, whilst against Ireland, Joe Marchant takes that jersey.

Harry Randall and Marcus Smith continue to operate together at half-back, Henry Slade is starting at inside centre, with Jack Nowell, Max Malins and Freddie Steward are the starting back three.

Perhaps the biggest relief for Jones is Tom Curry having passed through his return to play protocols following a head knock last time out.

Captaining England earlier in this campaign, Curry’s importance to England is clear, his head coach believing that the physicality that his openside offers will be influential in taking down Andy Farrell’s Ireland.

“Tom’s an important player for us,” Jones said. “He is a very physical and skilful number seven, and we are pleased he has passed all his protocols and he is ready to play.

“Courtney [Lawes] and Sam Simmonds have got a big job assisting him. The three of them have got to beat the Irish three at that particular contest, around the breakdown.

“I think whenever you play Ireland, the breakdown is a significant part of the game. They pride themselves on that area.

“We are also a physical team, and they haven’t played against a side as physical as us for a long time. We played against South Africa and did well in those physical stakes, so we really intend to take it to them.”

Amongst the finishers is Joe Launchbury, the Wasps lock likely to be winning his first cap for England since December 2020, the 30-year-old having sustained two long-term injuries in the meantime.

Alex Dombrandt will come off the bench too, the Harlequin having been monitored following his positive Covid-19 test.

Then with the experience of Ben Youngs, George Ford, Joe Marler and Elliot Daly to call upon, England will be hoping to put in a full 80-minute performance, something they haven’t done since the autumn.

Last week, Jack Nowell and Harry Randall outlined how close England have been to unleashing their new attack under Martin Gleeson. Excluding their rout of Italy, England have registered just two tries in the tournament so far, Marcus Smith far and away the leading points scorer thanks to his consistency from the tee.

For all the talk of this ‘New England’, there has been fairly little sparkle on the field, as well as an inability to control games throughout a full fixture, it is at times a challenging watch for England fans, although Jones is confident that the best is yet to come from his team.

“We are not far away,” Jones said. “We are one pass, one accurate kick, one good support line away from being very good. But we are a work in progress. We have increased our run meters in 12 months by 40%, so we are really pleased with the way that is going, but not converting tries.

Eddie Jones has made three changes to England’s starting XV...
Take a read to find out where??

“It is like that wave coming in, you can see it coming in, and all of a sudden it crashes, and this power comes out of it. That is what we will be like.”

For their trip to London, Ireland have brought johnny Sexton back into the starting side, as Hugo Keenan, Andrew Conway, Cian Healy, Iain Henderson and James Ryan all get starting berths.

Ahead of England by just one point, Andy Farrell’s team have impressed with their total rugby style of play, their solitary loss coming to an inspired France side in Paris in round two.

A win for either team will keep their hopes alive of lifting a trophy in just over a weekends time, other results the most important thing for both sides in the bigger picture.