Say it in 7 - Persuasion 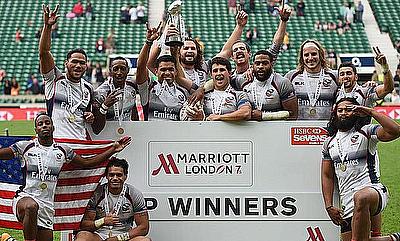 In our latest Say it in 7 article, we look at how important sponsorship is in helping boost the profile of this rapidly growing sport.

It has been quite a year for Rugby Sevens.

A ground breaking season in the latest HSBC Sevens World Series - which ended in May with Fiji claiming a second consecutive title in the Men's tournament while the Women's competition shone  - and now the campaign is reaching its climax in South America as Great Britain go for glory at the 2016 Olympic Games in Rio.

Sadly, it wasn't to be for GB's women in Brazil who fell at the semi-final stage before losing out to Canada in the Bronze medal match, but the sport has now been able to shine on one of the world's biggest stages which seemed unthinkable 20 years ago.

But why has rugby 7s been able to boost it's profile? Well, the increased media platform given to the sport by Sky Sports as well as social media has allowed more people to take an interest and recognize what rugby 7s is all about, but one of the factors is sponsorship.

If you look at the HSBC series, that is the prime example. This season the competition was played across the world in places such as Cape Town and Vancouver which has never been done before and having signed a new four year deal to sponsor the series 12 months ago, HSBC is continuing to help take the sport to the next level in both the men's and the women's game.

Now, with the success of the Olympics, sponsors like HSBC  and closer to home Singha, will now be able to boost the growth of the sport further for the 2016-17 season and it is likely that attendances and viewing figures will keep on rising heading into the 2020 Olympic Games in Tokyo. Arguably, 7s is one of the most rapidly growing sports across the world and with sponsorship at all levels and the increased media coverage, it isn't going to slow down anytime soon.

Say it in 7's Tim Baynes relates this to the business world and suggests that there are five main reasons that people do things in order to be successful:

People do things in business (and outside of business for five main reasons). To look good, feel good, make money, save money or save time). So the opportunity is for you to attach what you are proposing in your pitch, about your product and your solution to one of these five benefits.

It might be that you can confidently state that what you are proposing will save the money and make the customer look good!

THEN the benefits need to be backed up by evidence (defined as giving permission to the prospect that what you are promising as a benefit will come to pass).

For more info on how to building a compelling case email Tim at tim@timbaynes.co.uk