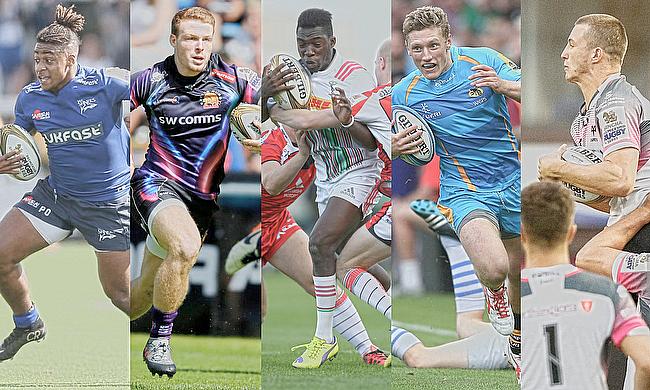 Not too many people expected then 18-year-old fly-half Adam Hastings to make an impact in senior rugby last season but that’s just what he did following a highly impressive string of performances in the 2015 edition of the Singha Premiership 7s.

Squads were once again packed with young talent this year and many of those potential future stars shone in the qualifying legs and finals day. We have taken a look at a handful of emerging players who have certainly improved their stock ahead of the 2016/17 Premiership season and who could be seeing additional playing time as a result.

The former Leicester Tigers academy winger lit up the Kingston Park qualifying leg, running in two hat-tricks and a combined total of eight tries in his three games, breaking the record that had been previously held by Christian Wade. In addition to his pace, footwork and try-scoring exploits, all of which there was very little doubt about, Odogwu also shone defensively, putting in a number of physical tackles in one-on-one situations. As a sub-six foot winger, proving his defensive ability will have done just as much for Odogwu’s senior prospects as his prolific try-scoring did. Sale’s loose forward trio of George Nott and Tom and Ben Curry all also had very noteworthy tournaments.

The back rower put in an impressive performance at the Sandy Park qualifying leg but it was on finals day when he really came into his own. His powerful carrying and support work, not to mention his three tries, helped lead Exeter to the final against Wasps. Unfortunately, even Simmonds’ sterling showing in the final wasn’t enough to win his side the tournament, but it was another glowing reference to add to his rugby CV. Breaking into a back row that already features Dave Ewers, Don Armand, Thomas Waldrom, Julian Salvi and Dave Dennis will not be easy, but Simmonds has surely earned himself an opportunity in the LV= Cup this season.

England U18 centre Ibitoye shone in the qualifying leg at Franklin’s Gardens, looking well at home amongst the plethora of U20 and senior players that surrounded him. His defensive work really stood out and that should resonate with the club’s coaches, who saw their team concede 583 points last season, the third most of any side in the Premiership. Ibitoye is also adept on the wing and that’s where he would most likely make his breakthrough for Quins, especially with recent England call-up Joe Marchant setting his sights on the club’s 13 jersey. An intriguing competition with fellow Singha 7s standout Sam Aspland-Robinson beckons at Quins.

Howe won’t be displacing Wade or Frank Halai in Wasps’ preferred XV anytime soon, but the young winger starred on finals day and will have certainly improved his stock for when the club decides to rest those starting wings. His speed and power were particularly noticeable and were highlighted when he scored an excellent try in the corner against Harlequins, bumping off physical wing Robbie Nairn on his way to the try line. He will be in competition with Josh Bassett and Sailosi Tagicakibau to be the number three wing for the big-spenders from Coventry. Could he fill in on the wing whilst Halai brings his weight and direct-running to Wasps’ otherwise lightweight midfield? It’s an outside the box idea.

Williams is in a similar situation to Howe, as he is unlikely to oust the ever-reliable Dan Evans from the Ospreys XV, but he has shown he has the ability to deputise for the full-back when necessary. His support work on finals day was excellent, as was his proclivity for getting his arms up and over tacklers, freeing his hands for offloads. His defensive work was also solid and he showed up positively in all areas across the qualifying leg and finals day. Alongside Keelan Giles, who stood out in the 2015 Singha 7s, Williams highlights the real potential the Ospreys have waiting to breakthrough in the back three.