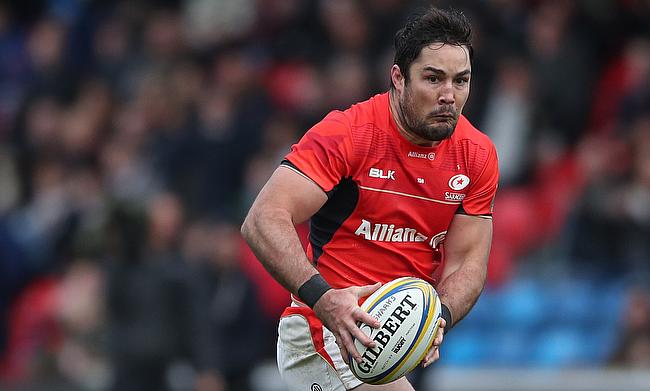 Alex Lozowski's three penalties in the second half allowed the defending champions Saracens come from behind and register a 24-20 victory over Gloucester in their Aviva Premiership encounter on Sunday.

Saracens have never lost a home game in the last nine months and survived a scare when Gloucester was leading at half-time by two points. However, they held on to their nerve and came up with a better second half performance and was aided by Gloucester prop John Afoa's sin-bin.

Gloucester number eight Ben Morgan crossed over as early as in the first minute to get his team off the mark with fullback James Hook adding the extras. Within 10 minutes, centre Brad Barritt responded with a try of his own and the scores were levelled when Lozowski added the conversion.

The scores were coming quickly as this time, fly-half Billy Burns strolled past the post and Hook once again added the conversion and Saracens were quick to respond once again through try from Mike Ellery but the fly-half missed the conversion this time around allowing a two-point lead for the visitors at half-time which stayed intact after a couple of penalties for exchanged.

Lozowski's two penalties after the break allowed Saracens to get a lead of four points for the first time in the game but Hook's 70th minute penalty closed the gap to one point.

With both teams evenly poised held his nerve and kicked his fourth penalty in the 74th minute to ensure a four-point win for Saracens.

Saracens have consolidated their position at the top of the table while Gloucester remains at 10th.

Saracens rugby director Mark McCall admitted that the game was a test of character for his team and credited Gloucester for their effort.

"It was a very tough game for us, a very difficult game which could've gone either way.

"Gloucester are a side who are just improving all the time and their kick-chase and defence were at a very high level.

"But, we just had enough to be resilient and to bounce back from some set-backs and it's a hallmark of this team to show that kind of character and that kind of effort."

He also expressed hope on England international Maro Itoje's return in the near future.

"He sees his consultant on Tuesday. He hasn't played any rugby since starting his rehab or had any involvement in contact at all.

"But, if the surgeon gives him the all-clear, hopefully he can have some sort of involvement next weekend."