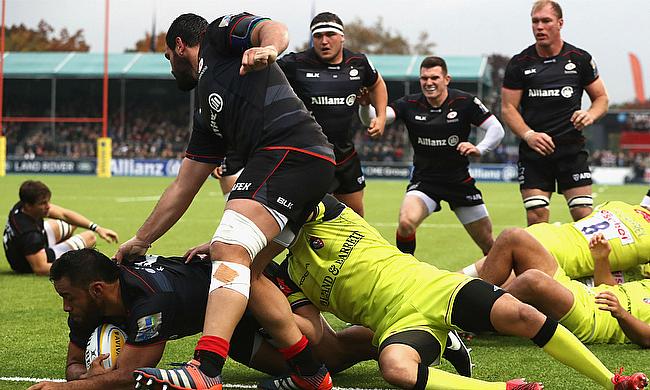 When you're triple champions and currently sitting atop of the Aviva Premiership, the question on every rugby union fan's lips is: can anyone stop Saracens?

After eight games in the 2016/2017 season, the London outfit has not only racked up seven wins and slipped up only once, but notched up 227 in-game points while conceding just 82.

Of course, an imperfect record does mean there's at least one chink in Sarries' armour this season, but is that enough for anyone to dethrone the champions elect? According to the latest betting odds from Sun Bets, the defending champs are 3/4 for this season's title. When compared to their closest rivals, Wasps (9/4), the betting does seem to suggest that Saracens are once again the frontrunners.

In fact, with Wasps suffering a surprise defeat to Gloucester on November 19, Sarries fans and players will be even more confident heading towards the festive season. However, as we all know, elite-level rugby can throw up some surprises (indeed, few would have predicted a Gloucester win over Wasps) and there's every chance Saracens could be overpowered as the season develops.

With this in mind, we've picked out the three biggest threats to Mark McCall's side and taken a look at how likely they are to unseat the Fez Boys at the top of the table.

Bath are certainly flying at the moment, but it may be a case of all that glitters isn't gold in this instance. There are certainly some shining lights in the side, 21-year-old Max Clark and Rhys Priestland being two of them, but with the latter sustaining a nasty leg injury against Bristol, Bath might be about to come unstuck.

Clashes with Harlequins, Saracens, Wasps and Exeter in their next four games could see Bath Rugby lose some serious ground in the Premiership title race. Of course, if they can continue their winning streak and win all four games then they'd quickly become the betting favourites. However, for that to happen, things would need to change.

Indeed, despite a comfortable 16-9 victory over Bristol, Bath's lineouts were weak. Failing to show any real strength or direction made Bath look vulnerable, and had it not been for Bristol's lack of attacking firepower, the home side could have easily lost. Even more concerning is the fact that Saracens et al will have the ability to expose this weakness and give Bath a good thrashing if they can't fix their lineouts.

Fortunately, it's not all bad news for Tabai Matson's side. Kicking from the likes of Darren Allinson was on point as was that of Adam Hastings and Matt Banahan. That ability to launch the ball forward was enough to keep Bath on the front foot and inside Bristol's half, but it certainly won't be enough to dominate the top sides.

If Bath can tighten up their lineouts and be stronger on their breakdowns, they have all the tools to win the league. However, if things stay as they are and the opposition gets tougher, they could quickly fade from the limelight.

Missing a chance to move top of the league will have hurt Wasps' confidence in recent weeks. Heading into the game against Gloucester, Wasps were the red-hot favourites. Unfortunately, slipping behind within a few minutes seemed to dampen Wasps' resolve and cause them to crumble.

For a side that has looked dominant for much of the season, to see them falter like this after a modicum of pressure should be a concern for coach Dai Young. Talking after the game, Young pointed to two main areas where his side lost out: set-pieces and scrums. A lack of strength in the scrum allowed Gloucester to capitalise, while missed shots and a general lack of accuracy in set-pieces meant Wasps weren't able to convert their forward pressure into points.

Overall, however, it was the lack of firepower that Wasps appeared to have when the going got tough. Unlike Leicester Tigers who showed the kind of resolve required to overturn a deficit and come out on top, the men in black just couldn't match Gloucester once they went in front. Of course, Gloucester are far from a bad side and their ninth place standing in the league certainly belies their ability. However, if Wasps are going to challenge Saracens then they have to win games like this.

While there's still time to turn things around, another performance like the one that saw them lose 36-18 to Gloucester will make it almost impossible for them to clinch the title.

The city's football team might have upset the Premier League odds last season and it seems as though the Tigers will have to perform a similar miracle if they're going to clinch the championship. For those with an eye on the odds, current estimates from Sun Bets put Leicester Tigers at 14/1 for the title, but performances on the pitch suggest that they may be emerging as something of a dark horse.

While much of the current chatter would suggest that Leicester's recent surge is thanks to Freddie Burns' kicking abilities (which has been sublime), it's teamwork that's making the difference. When Aaron Mauger's men came from behind to defeat Harlequins 25-6, they did so through tenacity and grit.

Indeed, for Burns to be able to convert five penalty kicks, the team as a whole needed to get him into a position to work his magic. Although the first-half gave little for Tigers fans to cheer about, heavy pressure on the second eventually created some openings. Ellis Genge and Owen Williams not only got their hands and feet on the ball (and some players) at the right times, but linked up to push the Quins defensive line back on multiple occasions.

The only black mark on the game for Tigers was the loss of Burns 10 minutes from the end. A knock saw him stretchered off and potentially a doubt for the next few games. However, that fact aside, the club's recent team-building event with the local fire and rescue service appears to have paid dividends. Will that be enough to stop Sarries? Possibly not, but if it comes down to a battle of wills at the close of the season, Leicester could certainly surprise a few people.

Can anyone dethrone Saracens this season? In theory, yes, but the reality looks to be a lot tougher. Each of the above teams has the ability to come out on top, but only if they can plug their holes and take their opportunities when it counts.