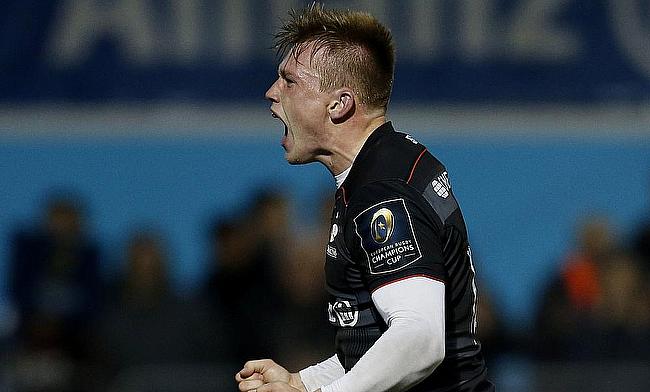 Nick Tompkins was on the scoresheet as Sarries thrashed Ampthill
©PA

Round 9’s action in the GK IPA Championship certainly didn’t disappoint. There were braces, a couple of hat-tricks and even a four-try haul as the usual suspects racked up bonus-point wins whilst Nottingham chipped in with their first victory of the season.

It was a bonkers weekend that bled into Monday night so read on to try and get to grips with just what went down:

The weekend’s action got underway with Bedford welcoming league leaders Ealing for a Friday night lights contest which ultimately set the tone for Round 9.

Whilst the Trailfinders eventually added another bonus point win, Bedford gave them a real scare in fighting back and will be disappointed to come away empty-handed against one of the league’s highflyers for the second game running.

It looked set to be another procession for the visitors once they’d built up a 21-0 lead inside the opening half-hour.

First, Max Bodilly went over for their usual early try and it was quickly added to by a score from Pat Howard before Charlie Walker got in on the action. The returning Steven Shingler was metronomic from the tee with the extras.

?? The team come together after another win on the road.#ETF pic.twitter.com/N1nF2CB28N

The Blues responded in style to quell the one-way traffic as Pat Tapley grabbed a brace before the interval to reduce the half-time deficit to 21-12.

Just a few minutes into the second period and an unlikely comeback was on as Joe Atkinson crashed over to take Bedford within four, however it rather fell apart from there as Ealing put their foot down.

A succession of scrum penalties against the hosts saw replacement tighthead Henry Paul yellow carded, which meant they also had to drop another man after starter Ed Prowse was forced off injured.

Ealing made the numbers count almost immediately with Howard getting his second and securing the bonus point.

It took until the closing stages for them to seal the deal and add some gloss to the scoreline, with super-sub Jordan Burns scoring against his former club for yet another try off the bench whilst Guy Thompson had the final say with Ealing’s sixth.

Fans were once again treated to some flowing running rugby at the Stade Santander International, but this time Jersey were on the wrong end of the result as Coventry strengthened their assault on the top four.

On-loan Bath centre Will Butt equalled a Cov club record in helping himself to a quartet of tries.

After withstanding some early Jersey pressure in the opening quarter, Butt finished off a fine team move to score his first and give Coventry a lead which they would never relinquish.

They added to that advantage when Tony Fenner knocked over a penalty before Butt was sent over for his second, making Jersey pay for Max Green’s sin-bin.

He secured his hat-trick just minutes after the interval and then added a fourth following Brendan Cope’s penalty for Jersey.

Bonus point in the bag for the visitors and they added a fifth try before the hour mark. It was someone other than Butt this time as Sam Aspland-Robinson galloped in to finish off a wonderful long-range move.

Aspland-Robinson’s copybook was blotted late on when he was yellow carded and Cope scored a consolation try for the Reds, but the day belonged to Coventry and Will Butt.

This was a battle between the Championship’s bottom two which ultimately saw them trade places as Nottingham finally broke their duck for an impressive first win of the season.

Both sides' overall effort and performance levels are far greater than their results give them credit for, but in the end, the hosts were outmuscled by a Green and Whites side desperate to get off the mark.

Nottingham set their stall out early doors by forcing a couple of lineout drives that ended in a penalty try and Luc Jones being sin-binned for Richmond.

His indiscretion was punished further as Nottingham doubled their lead whilst a man to the good thanks to David Williams’ effort and Alex Dolly’s conversion.

Back to a full complement, Richmond managed to work their way into the contest and they drove Jimmy Litchfield across the line to half the deficit though the joy was to be short-lived.

It secured our 3??rd bonus point of the season ?? pic.twitter.com/eWmiG66Pc5

A second Richmond yellow card, this time for Jake Allcock, was quickly followed by another Nottingham rumble which concluded with a try for Jake Farnworth.

Rob Kirby kicked over a penalty for Richmond soon after to try and claw them back into the contest, but Nottingham utilised their catch and drive once again for Aniseko Sio to go over and give the visitors a 26-10 half-time lead.

They added to that just a few minutes into the second period as Williams jinked his way over for his second.

An extended period without further score was then broken as Richmond were awarded a penalty try of their own as Jack Stapley was the guilty party for Nottingham, deliberately knocking the ball on and taking a yellow card for his troubles.

Dolly added a penalty to give Nottingham some breathing room to conclude the scoring, but there was still time for a fourth and final sin-binning of the afternoon with Jack Ramshaw making it two apiece late on.

A whistle heavy affair where the win was built on grunt, Nottingham off the mark and off the bottom.

The last action at The Mennaye this season served up yet another epic to conclude what has been a rollercoaster ride down in Penzance.

Pirates built up a monumental first-half lead before Hartpury fought back to earn themselves a try bonus point despite a real hammering.

Two forward hat tricks and eight tries in total for the hosts meant even a late rally from Hartpury couldn’t take the shine off a big win.

It was the visitors who struck an early blow, Ben Foley dotting down with just a couple of minutes gone, but that was ultimately as good as it got for Pury until the final knockings of this contest.

Six unanswered Pirates tries into the break saw the game put to bed.

They forced a penalty try from a scrum to take the lead before Alex O’Meara plucked an interception to race in from halfway.

Wasps bound Dan Frost rumbled over for two after he’d entered the fray earlier than expected from the bench and those efforts were sandwiched between a couple from Tom Duncan, two-thirds of what would turn out to be hat-tricks for both.

All of that meant for a 40-5 half-time Pirate landslide at the break.

Hartpury struck first in the second period as they had in the first, though not as quickly this time.

Joshua Bragman scored and converted, but again, they were unable to build on it.

Frost was first to complete his hat-trick from close range shortly followed by Duncan to take Pirates past 50 and conclude their scoring exploits. Hartpury were further stung by a yellow card to Ciaran Knight.

However, they showed great resilience to fight their way to four tries and that bonus point at least thanks to late scores from Robbie Smith and Sam Goatley at the death, but this game capped off a breathless season at the Mennaye.

Following a Sunday day of rest, Sarries welcomed Ampthill to town to conclude Round 9’s action, along with some expectant fans.

They witnessed more than the fair share of action as Saracens laid on 11 tries to romp into the top two for the first time this season.

The occasion was a great reflection of how far Ampthill have progressed over the years, contesting a second-tier game against one of club rugby’s giants regardless of the scenario behind it and the result.

Sarries took no time at all in asserting their dominance as Nick Tompkins crashed over in the opening minutes before going on to make it a double after Jamie George had followed his lead.

This all made for a 21-0 lead inside 15 minutes with Owen Farrell going about his business from the tee.

Ampthill did get some joy from there as they got their rolling maul working to good effect resulting in Syd Blackmore rumbling over the line.

That moment of respite was to be short-lived as Sarries worked a walk in for Sean Maitland out wide, a trick they repeated right on half-time after Will Porter was sent to the naughty step for the A’s. Farrell converted yet again and made it 33-7 at the break.

There was no let-up once proceedings were back underway, Sarries outdoing their fast start in the first half to send Ali Crossdale over within two minutes of the second thanks to a pinpoint kick from his skipper.

Elliott Obatoyinbo was next over before Alex Goode was reintroduced for the hosts following his return from Japan.

Twice in quick succession, Saracens drove Tom Woolstencroft over from a catch and drive before Ampthill finally fired another shot.

A Louis Grimoldby grubber through was pounced on by Spencer Sutherland for the Mob’s second score and some further consolation from the contest.

That still left time for a couple more Sarries scores as Crossdale scored his second, leaving Dom Morris to dive over and wrap up proceedings with the final play of the game.