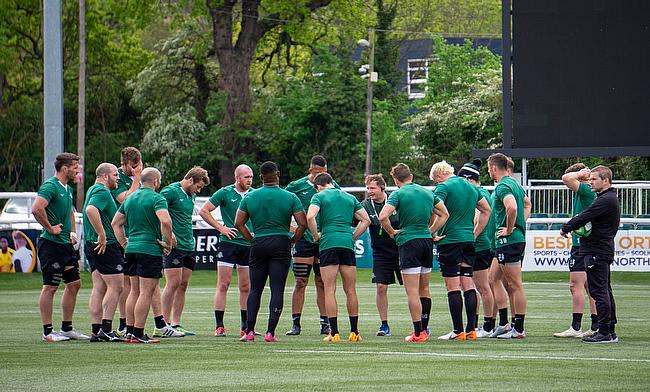 Max Argyle Exclusive: 'It was quite nice to give something back to the club'
Play-off ambitions for Championship top three remain on track
Saracens promotion charge heads to Nottingham in GK IPA Championship
Saracens into the top three following dominant win over Ealing Trailfinders

Following two long weekends without any Championship action, the season now enters the business end with plenty of questions left to answer.

This third portion of the campaign sees three successive game weeks where teams will finish off their schedules before the top two return to battle it out in a two-legged promotion play-off.

If that - and the jostle for position throughout the table - wasn’t exciting enough, the news that fans will continue to return should ramp it up a notch.

Jersey were the first to welcome supporters back a few weeks ago and Saracens will join them this time around, having moved their game to Monday.

It all makes for an explosive ending to a tantalising season, starting with Round 9:

‘Friday Night Lights’ are back as Bedford welcome league leaders Ealing for what should be a cracking return to action.

The Blues went down swinging at Doncaster last time out but ultimately came away with nothing, so they will now be looking forward to attempting to continue a strong home record.

They’ve won two of their three games at Goldington Road this season, whilst picking up a losing bonus point in defeat.

Ealing roll into town still at the summit of the table, knowing their destiny remains in their own hands ahead of their monumental final regular-season game against Doncaster next week.

After that, they will know whether the bye week that follows will be preparations for the play-off final or the beginning of the summer for the Trailfinders’ players and staff.

The league leaders have completely dominated this match-up in recent years - winning nine of the last 10 meetings between the two sides - with the only Bedford victory in that stretch coming back in January 2019 at this very ground.

Bedford have sought to entertain all season and will still harbour hopes of jumping up a couple of places in the table before the term ends, whilst Ealing have steamrollered everyone but Saracens in their campaign thus far. This one should provide plenty of running rugby.

Jersey’s second home game of the season will once again be open to spectators and if it’s anything like the first from a few weeks back, then this will be an absolutely cracking occasion.

Records tumbled and tries flowed on the day and the Reds’ good cheer continued as they made it back to back wins for the first time this season against Ampthill last time out.

Cov, meanwhile, had been in a bit of a purple patch themselves, stringing together three wins on the spin before being undone by Cornish Pirates just before the break.

With games fast running out, this one will have huge ramifications on the table’s final bearings. Cov will still fancy a top-four finish, whilst Jersey will be keen to overhaul their visitors who currently sit fifth.

Jersey Reds' fans were back at the Stade Santander International last month ??

And @MaxArgyle can't wait to play in front of their loyal supporters once again as #ChampRugby returns...@CallumW18 caught up with the back-rower for TRU.

A healthy rivalry has already begun to bubble thanks to the three Championship clashes these two have shared since Cov’s return to the second tier in 2018/19.

That campaign was bookended by Coventry successes over Jersey. The Midlands club edged a tight encounter to start the year off before making it a double with a thrilling bonus-point win on the Island to conclude the season.

Again, it proved to be the grand opener in 2019/20 as Jersey gained a modicum of revenge on their home patch with a single score victory.

This could be another thriller and fans will be there to see it.

The bottom two face off as they battle to avoid finishing at the foot of the table.

With just one win between them in 14 games this season, courtesy of Richmond turning over Jersey, this provides a huge opportunity for a positive result going into the final few weeks of the campaign.

Between them, they have managed just 22 tries this term (Nottingham 13 and Richmond 9) which is still fewer than seven of the nine other Championship clubs.

Both looked to be steadily improving, but they have been derailed by some recent heavy defeats.

With the news this week that London Scottish are staying put at the RAG for the time being, Richmond will want to regain some momentum for their neighbour’s return whilst Nottingham are still aiming for their first win of the season as they look to give a decent send off to Neil Fowkes.

It’s been over two years since this pair played one another due to Richmond’s relegation so this will be a great chance to get reacquainted.

Nottingham have won on their last two trips to Richmond, though a run of three successive wins for the Green and Whites in this match-up came to an end in the most recent encounter back in March 2019 at Lady Bay.

Despite tough seasons, the effort of these two has never waned which you have to applaud given the difficulties they’ve faced and the scenarios they have had to function in.

Fingers crossed for a positive finish to the season for both, though this week there can only be one winner.

The literal weekend’s action concludes with the Pirates welcoming Hartpury down to the Mennaye for a (sort of) southern dust-up.

Pirates sit fourth currently but had their play-off hopes fatally extinguished after losing at home to Ampthill. However, they did manage to bounce back last time out following a win over Coventry and now they will look to finish the season as positively as they started it.

Hartpury have provided some of the most entertaining games of the campaign without really translating that into results, winning just one of their last six, meaning they sit ninth despite the thrill factor.

In complete contrast, this particular fixture last term resulted in one of the tensest and lowest scoring affairs possible as the Pirates toiled to a 6-0 win in a match that ultimately had more pitch inspections than points.

This weekend’s hosts have won all five Championship match-ups between the sides since Hartpury’s promotion in 2017 and despite the Penzance weather forecast pointing towards rain on Saturday, I will confidently predict more than six points and both teams getting on the board in this one.

Pury will be eyeing up a big upset on the road having witnessed Ampthill achieve the same feat in the most recent game at the Mennaye, but the Pirates will not let their proud home record take another dent without a serious fight.

Yes, you read that right.

Round 9 rolls into Monday with both Saracens and Ampthill agreeing to rearrange their fixture to allow fans in for what will be a momentous occasion.

Sarries have been absolutely flying since that infamous opening day defeat and with Doncaster on a bye week, they can move into the top two for the first time this season.

This week, they welcomed back Alex Goode from Japan, adding further firepower to a team that had five players selected in Warren Gatland’s British and Irish Lions squad - the most from any club despite currently being in the second tier.

As for Ampthill, they have strung together another solid season already and sit sixth despite losing to Jersey last time out so they won’t want to drop below that position in the table.

A’s Director of Rugby Mark Lavery has called this the biggest game in Ampthill’s history, and to be honest, it is unlikely we will see these two in competitive action again in our lifetime.

Moving the fixture back does mean that Saracens will be playing twice in five days, something which they certainly have the squad for and will be worth it for the fans.

The clubs have a long-standing relationship and there are a number of Sarries players who have turned out for Ampthill in recent seasons, including this campaign, though that affection will be paused during Monday evening.

The Knights will use their bye week as extra preparation time before a crucial clash against Ealing which will be a must-win if they are to secure a play-off spot and even then, that might not be quite enough.

Donny then host Nottingham on the final day as they seek to extend what has already been a wonderful season for the South Yorkshire side.