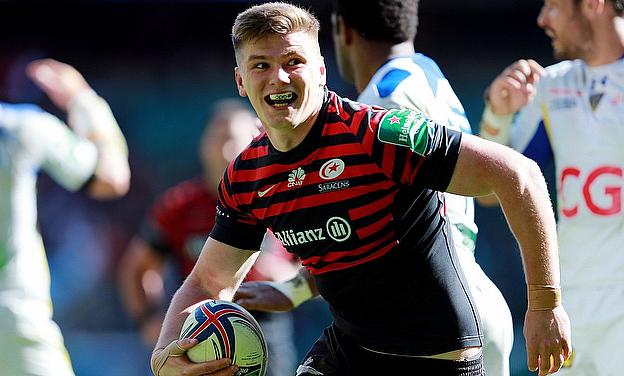 Owen Farrell says Saracens are determined to get "better and better" as they close in on a possible European and domestic trophy double.

Saracens face an Aviva Premiership play-off against Harlequins on Saturday before contesting their first Heineken Cup final in Cardiff seven days later, when holders Toulon stand between them and title glory.

It will be Saracens' first Heineken final, but their 46-6 demolition of French heavyweights Clermont Auvergne at the last-four stage three weeks ago sent warning signals flashing across Europe.

It was a blistering performance that would not have gone unnoticed at Toulon, who are bidding to become only the third team after Leicester and Leinster to successfully retain Heineken silverware.

Such was the manner of Saracens' Twickenham triumph - they scored six tries and made last season's beaten Heineken finalists look ordinary - that a first English European champion since Wasps seven years ago cannot be discounted.

Toulon, with their galaxy of star names like Jonny Wilkinson, Matt Giteau, Bryan Habana, Bakkies Botha and Juan Smith, will start as favourites, given their knockout phase victories over Irish giants Leinster and Munster, but Saracens have every chance.

"It was the most joined-up performance I can remember in a Saracens shirt," Saracens and England fly-half Farrell said, reflecting on the Clermont romp.

"That, and the Northampton (Premiership) game - although there were a couple of penalties and a yellow card and Northampton fought their way back.

"I thought we were very joined-up in what we did in those two games. It wasn't just one area of our game where we looked good. It was a collective effort from us all."

The big challenge for Saracens next week is to not only reattain those heights, but possibly eclipse them, given Toulon's world-class pedigree.

But Farrell added: "Why not? We've set a standard for ourselves now, and we want to not only maintain those standards, but build on them.

"That's the key for us. We want to make sure we get better and better and don't just rest on one good performance.

Saracens have gone one better this season in Europe than in 2008 and 2013 when they made semi-final exits against Munster and Toulon, and having maintained a rich vein of form into the season's business end, expectation levels at the Millennium Stadium will be high.

"I thought we were very good (against Clermont)," Farrell said.

"But you don't want to be too over the moon. It was a semi-final, and you want to come off saying that having won the final.

Next week's final will be the 19th and last Heineken showpiece before it is succeeded by the European Rugby Champions Cup later this year.

The 18 previous tournaments have been shared three ways by English, Irish and French winners, while Saracens against Toulon is the competition's first Anglo-French final since Wasps beat Toulouse at Twickenham 10 years ago.

:: The Aviva Premiership semi-final between Harlequins and Saracens kicks off at 2pm on Saturday, May 17, exclusively live on BT Sport.