Saracens hold off Gloucester with a 12-21 victory 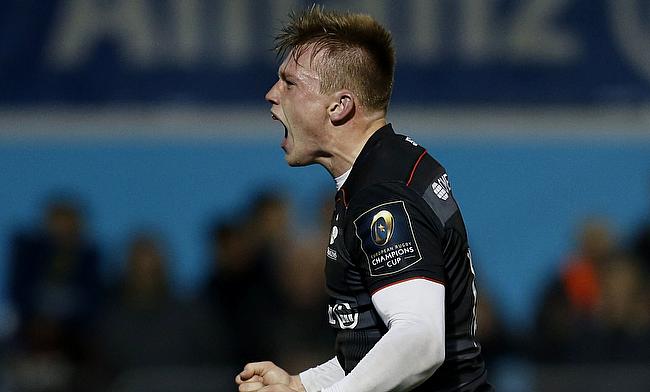 Saracens registered their first win following their recent sanction for a breach of salary cap as they defeated Gloucester Rugby 12-211 at Kingsholm on Saturday.

The Sarries now move to the second place in the table but can drop to the bottom if their appeal against the sanction of 35 points deduction and £5.36m fine goes in vain. They also had a tough treatment from Gloucester fans as they waved fake £50 at the Premiership and European champions.

After the first 16 points went without a point, the Sarries started the proceedings with a penalty goal from Manu Vunipola and nine minutes later, Nick Tompkins crossed over. Vunipola also kicked the conversion to take the visitors to a 10-point lead.

Gloucester responded back with a 29th minute try from Tom Marshall but back to back penalties from Vunipola at the stroke of half-time ensured Mark McCall's men had a 5-16 lead at the end of the first half.

The Sarries were quick to get off the block in the second half as Ben Earl dotted down in the 48th minute taking their tally to 21 points and it proved enough for them despite a late try from Gloucester's Lewis Ludlow.

"Over the past four weeks the squad have been amazing," said McCall.

"Everybody knows how many players we have unavailable and the three performances before this one were grit and full of toughness, and I think we took grit and toughness to a whole new level today and it was a performance we can be proud of.

"I thought it was quite a quiet crowd today all things considered, but that's down to how the players performed.