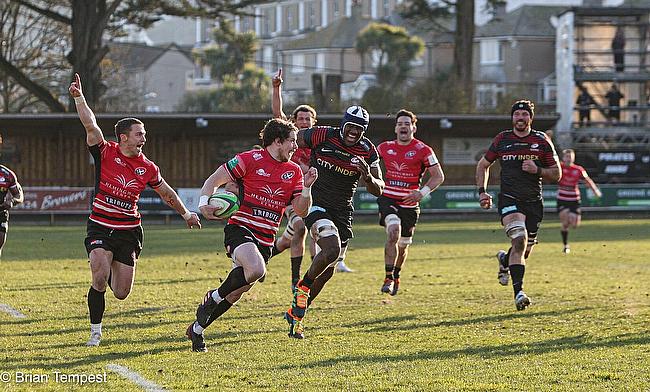 Guy Thompson Column: You haven’t got time to feel your way into this season
A bounce back like no other: Richmond’s return to the Championship
GK IPA Championship Preview: Saracens ready for second-tier bow
Alex Lewington Exclusive: 'It’s more about driving our own standards'

The Championship returned with a bang and brought with it drama, thrills, skills and shocks aplenty.

It was a scintillating opening weekend which provided a timely shot in the arm for the league and a reminder of the entertainment it offers up week after week.

After a year-long wait, 10 teams were in action and here’s all you need to know from Round One:

This fixture got the season officially underway, and it was Hartpury who secured an impressive bonus-point victory against newly-promoted Richmond thanks largely to a flurry of tries either side of half-time and a hat trick from winger Ben Foley.

Foley scored the first try of the 2020/21 season for the hosts, collecting his own chip and chase to finish off a slick counter-attack. Joshua Bragman converted his effort for a 7-0 lead.

Richmond responded soon after through a Tom Hodgson penalty to open their account for the season, but it wasn’t long before Hartpury crossed the whitewash again as Aled Ward crashed over from close range for a converted score.

Back came the visitors, though. A big Max Trimble break was finished off by Alex Goble for a well-worked try, Hodgson adding the extras to cut the lead to 14-10.

This was to be the last time they were in touching distance, though, as Hartpury’s ascendancy and a series of Richmond errors culminated in a trio of tries for the hosts.

First, some fine Bragman work saw him feed James Williams, who still had plenty to do on his way to the line before Foley pounced for his second just before the interval.

That momentum continued into the second half as an early penalty allowed Hartpury another 5-metre lineout and the ball was soon worked out to Foley on the overlap for his third try and Hartpury’s fifth. Bragman again landed the kick to take his side out to 35-10.

His 50th-minute penalty made it 38-10, which proved to be the last points for the home side with the game becoming a little untidy in the final quarter.

Richmond and Callum Watson had the final say, with the scrum-half’s quick tap allowing him to motor in for a smart score. The conversion made it 38-17 which is how it stayed despite some late pressure from the visitors.

The result of the weekend and one of the most famous in Pirates, and indeed the Championship’s history.

24 hours on from St Piran’s day, the Pirates pulled off one of the great upsets against a stacked Saracens side and it was hugely deserved after an excellent performance built on a dominant set-piece.

Pirates have established themselves towards the top of the league in recent years, so perhaps labelling this a huge shock is doing them a great disservice, especially given their excellent home record.

It didn’t look a likely outcome when Sarries’ Sean Maitland finished from a floated Manu Vunipola pass in the early stages to give the visitors a 5-0 lead.

Pirates had other ideas, though, cutting the advantage to 5-3 with a Luke Scully penalty before captain Tom Duncan barged over 10 minutes later for an unconverted score to nudge the home side in front.

Your #MondayMotivation comes courtesy of @CornishPirates1!

"They [Saracens] have got a final every week effectively. Everybody wants to beat them and everyone will put up an extra 10% of effort."#RugbyTonight pic.twitter.com/z3gqs16Yqv

Saracens scored their second out wide through Alex Lewington to give them a slender 10-8 lead which they took into the break.

The home side were causing all kinds of problems for their opponents at scrum and lineout time, so it was fitting when hooker Dan Frost was next to crash over after five minutes of the second period. Scully added the extras to swing the lead back into their favour, but it didn’t last long.

Tim Swinson dotted down for a converted score, but the Pirates hit back once again as a penalty from Scully made it 18-17 to the hosts.

Scully sent a penalty wide as the clock ticked into the final 10 minutes before replacement scrum-half Rhodri Davies pounced on some Saracens hesitancy to race away for the decisive score.

Scully’s conversion took the Pirates out to a 25-17 advantage which they held on to, denying Saracens even the magnanimity of a losing bonus point.

A famous win for Cornish Pirates and an early blow to Saracens’ ambitions. This memorable day has blown the promotion race wide open already...

Coventry edged Bedford Blues with the final kick of the match to sneak the spoils for the hosts in a match punctuated by handling errors and infringements.

Precious scoring opportunities were shared by two sides bereft of competitive match fitness, but they will be glad of the 80 minutes under their belts.

Bedford looked the more likely in the first period, but any chances went begging, most notably from scrum-half Conor Tupai.

The Blues managed the only points of the half through Tommy Matthews' boot, making it an easy half for the scoreboard operator.

There was still time for Tupai to be sent to the sin-bin before the interval, meaning Bedford begun the second half a man down. It didn’t show, though, as Matthews added a second penalty soon after, but Coventry sprung into life with their best period of the match.

After sending a penalty deep into Bedford territory, the visitors infringed at consecutive mauls and Lewis Bean joined Tupai in the bin.

Coventry made the advantage pay as hooker Nic Dolly went over from the next catch and drive, with his effort converted by Kieran Wilkinson. The hosts now had a 7-6 lead with under half an hour left to play.

Neither side could get a substantial foothold for the remaining period, but the closing stages provided drama aplenty.

Ex-Coventry favourite Will Maisey took the opportunity to regain the lead for the Blues, making no mistake from the tee to put Bedford 9-7 ahead with time running out.

A series of Bedford infractions in the closing stages saw Will Carrick-Smith become the third visiting player sent to the bin before Coventry captain Ryan Burrow opted for the posts and a chance to snatch the win.

Replacement Tony Fenner kept his cool, seizing a 10-9 victory for Cov and sending Bedford home with just a losing bonus point from the closest of contests.

Nottingham suffered a heavy home defeat as Ealing sent out a huge warning to their promotion rivals.

The visitors scored eight tries in a merciless display from start to finish whilst you could tell Nottingham had not played a game of rugby in over a year and they will undoubtedly improve.

The first try came within the opening six minutes as Fraser Strachan fed a rampaging Guy Thompson who steamed in from outside the 22. Craig Willis converted to give Ealing an early 7-0 advantage.

Nottingham did reduce the arrears with 10 minutes played, Alex Dolly sending over an easy penalty to close the gap to 7-3.

This proved to be as good as it got for the hosts as three more tries from Alun Walker, Craig Hampson and Strachan saw Ealing wrap up a bonus point within 35 minutes and take a commanding 26-3 lead into the break.

Regular Ealing try-scoring intervals continued throughout the second period, with Walker adding his second, this time converted by Willis to take the lead up to 30.

A flurry of replacements did nothing to halt the Trailfinders momentum, with Angus Kernohan finishing well before Hampson secured his brace off the back of an excellent Harry Casson charge.

The aforementioned Casson had the final word from another stampede in the final 10 minutes.

Steven Shingler added another two conversions for a deserved 52-3 win for Ealing as they laid down a marker for the weeks ahead.

Rounding off the weekend’s action was another tense tussle, decided by a Sam Olver conversion in the closing stages.

It was a ding-dong contest that saw the lead change hands several times throughout and the hosts lose three players to the sin-bin in a 15-minute second-half period.

A fast start from the Knights saw Olver add the first points of the match with a successful early penalty, a feat which he repeated just after the 20-minute mark to give Donny a 6-0 lead.

Then began a game of hot potato with neither side ever able to build a telling advantage before the final whistle.

After half an hour, Ampthill hit back through Joe Bercis, the flanker dotting down before Louis Grimoldby converted to nudge the A’s ahead 7-6.

More ill-disciplines from the hosts allowed Olver to add a third penalty as half-time approached, putting the Knights 9-7 up.

That lead lasted for just a few minutes of the second period. Some aggressive Ampthill hounding forced an error from Kyle Evans on the Doncaster line and it allowed James Roberts to dive on the ball for a debut try as the pendulum swung back the home side’s way.

Some strong Knights pressure eventually led to the first of three yellow cards for the hosts, Jarryd Sage the recipient. Olver stepped up to add a fourth penalty to level the scores at 12-12 approaching an hour on the clock.

Ampthill’s Alex Humfrey then enjoyed a rollercoaster spell, scoring out wide on 60 minutes to regain a 17-12 lead, with Grimoldby again able to convert.

He then replaced Sage on the naughty step as the final 10 minutes approached and replacement loosehead Alex Pleasants was soon to join Humfrey off the back of a series of scrum penalties.

Still, Ampthill held firm despite the numerical losses until the ball was swung out wide for Evans to make amends for his earlier error. He applied the finishing touches to tie the scores up at 17-17, with the conversion to come and time ticking away.

Up stepped Olver, who held his nerve and slotted the decisive kick, the Knights holding out for a 19-17 success and an impressive victory on the road.

Round Two is sure to serve up plenty more action and drama, with Jersey set for their first taste of action as Nottingham are the second team on a bye week.