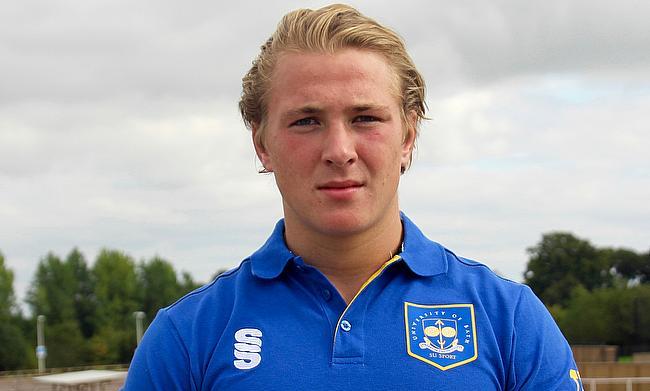 The hooker was named in Bath’s squad, along with a number of other talented youngsters, and will head to Franklin’s Gardens this Friday to continue preparations for the new Premiership season.

Bath have been drawn into Pool C alongside Exeter Chiefs and Worcester Warriors with the Blue, Black and White aiming to progress into the finals stage after suffering elimination at the first hurdle last year.

And 21-year-old Doughty, who is currently still a student at the University of Bath, is excited by the prospect of playing in this season’s competition.

“I am massively looking forward to it,” he said. “It is a great platform for all the younger players to go out there and express themselves against Premiership clubs.

A different view of training, as the @bathrugby squad prepares for the @premrugby 7s, which gets underway tonight.

“What young player doesn’t want to play on BT Sport?! It’s a great platform to showcase your skills as a player but also as a club. It is the perfect place to be.

“We have done some prep for it this week because the majority of the focus has been on the XV-a-side game for pre-season, but throughout this week, the Sevens boys have been doing their own training and are looking good.”

Doughty recently signed an academy contract with Bath Rugby and the links the club has with the university has helped provide a pathway for the aspiring youngster.

Across the Premiership 7s sides, there are number of players who have all tasted rugby at university level and the current top competition, BUCS Super Rugby, is only helping their development.

“I am absolutely buzzing to have signed,” added Doughty. “I have worked hard and it has come at a really good time for me. It is a step in the right direction and it helps me moving forward.

“It [university rugby] has helped massively. Being involved with the university and the links they have with Bath has been great to be a part of over the last couple of seasons.

“For the players, some may have not made it at a higher level or dropped out of academies when they were younger, but the league does give players an opportunity to maybe play professionally."

In terms of university rugby, Bath had a disappointing domestic campaign last season as they finished in seventh place, but they did reach the semi-finals of the knockout stages.

Doughty will skipper the side this season and he believes the Blue and Gold can make it all the way to Twickenham with an exciting squad.

He said: “It would be silly not to have high hopes. We have been in the semi-finals the last couple of years so definitely our aim will be getting to Twickenham this season and getting to that final.

“We have got a lot of new boys coming in and they are some younger lads so we are building a good squad. If they can improve week after week then we should have a strong year.

“I think the captaincy and leadership role helps me individually. The extra responsibility and pressure helps my own performance and it’s just something I have enjoyed doing!”

For now, Doughty’s attention is on the Premiership 7s and he will be lining up alongside a number of familiar faces.

Bath will be captained by Jack Wilson who has been capped by both New Zealand and England 7s while experienced players Chris Cook, Max Wright and Darren Allinson are also included.

Doughty added: “Levi Davis, Darren Atkins and Chris Cook are some of the players to look out for. They are all quick and elusive backs and Chris has got a bit more experience under his belt which helps some of the younger boys.

“Going into the competition, we always want to enjoy ourselves, but it would be silly to not go into a competition with high hopes because we have a young squad. We want to win the pool and progress into the Saturday.”

Check out all the latest Premiership 7s right here!