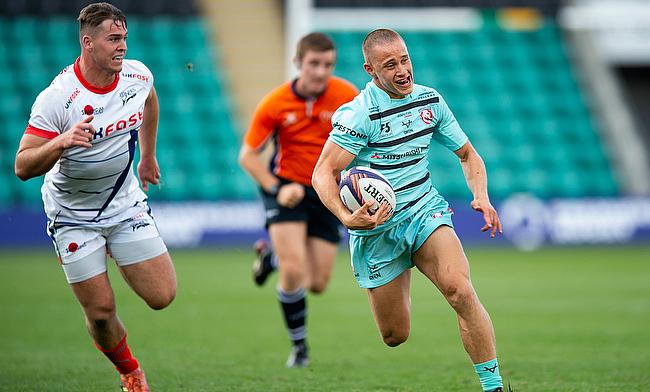 Glashan and Hurd fly the flag for Scotland in BUCS Team of the Year
Sally Stott: “I will treasure the years I have spent playing for Edinburgh University”
BUCS Super Rugby graduates Duff and Forrester cross paths at Moseley
Keay: 'The players have made a statement'

It must be a strange time for many university students. The end of their latest year in education has been curtailed by Covid-19 and for some, the pandemic may well have halted end of semester exams or disrupted the completion of studies.

The feeling of handing in a dissertation or enjoying a final night out hasn't been able to happen and for a large portion of students, the cancellation of their respective sporting activities would have also been a blow.

Sport at university plays an important role for many students but at Hartpury University, their heartbeat is arguably  the Wednesday afternoon BUCS action.

When it comes to rugby, Harry Fry and Stephen Varney fall under that bracket but due to the unprecedented situation we find ourselves in, the sport which plays such a vital part in their lives has become absent.

Reflecting on the respective journeys of Fry and Varney, the duo are seemingly set for bright futures in the game. Last summer, they both graduated from Hartpury College and signed for the Gloucester Rugby Senior Academy alongside the likes of rising star, Louis Rees-Zammit.

Fry (prop) is now studying strength and conditioning at Hartpury University whilst scrum-half Varney is combining his rugby with a sports business management degree. The pair, who are both 19, have taken very similar steps in their short rugby careers and their experiences have seen them forge a strong friendship, but since lockdown, they have had to keep themselves to themselves.

“It is the first time me and Steve have spoken for quite a while!” says Fry when we begin our chat over Zoom. “We did set up a FaceTime but I think we just both forgot!

“We spent the second year of college together and lived in the same block. We were both in each other’s forms and we both lived in the Gloucester Academy house this year so, yeah, we are very close.”

Both originally from Wales, Fry and Varney have moved back home to ‘busy’ households where training with their respective siblings has allowed them to keep on top of their fitness during this lockdown period.

In terms of the duo’s Gloucester commitments, their potential playing time for the rest of this season has been cut following the cancellation of the Premiership Shield campaign, but talks are still ongoing regarding the resumption of the Gallagher Premiership.

From a Hartpury point of view, the suspension of all BUCS activity means the university will not have the chance to retain their BUCS Super Rugby crown after dominating the competition since its introduction in 2016.

Having been in the Hartpury environment for a couple of years prior to their university studies, the three successive BUCS Super Rugby titles which Hartpury have been able to add to their trophy cabinet have not been lost on Fry and Varney, who are both keen to follow in the footsteps of some of the institutions most recent stars.

The likes of Seb Negri (Italy) and Harry Randall (Bristol Bears) have lifted university rugby’s biggest prize and the current crop of Hartpury talent realise just how valuable student rugby is to their progress.

“The last few months, my game has developed because like those guys before us, I have been playing regularly at that level,” Varney says. “You are playing alongside decent players and it is a quick game as well and very physical so BUCS rugby is good.”

“I think it is massive, especially for me and Varn having come through the college as well,” adds Fry, whose older brother Ben also attended Hartpury.

“We always saw the massive crowds at the university games and we know how well the team has done over the last few years so it becomes an honour to chuck the shirt on and run out on the Gillman’s Ground or the ALPAS Arena as they call it now!

“Obviously being a prop, at 18/19 years-old, you are not quite as physically developed as everyone around you so I have taken some beatings and gone backwards in the scrum quite a few times, but playing in the Premiership Shield or in BUCS is how you learn. I have thoroughly enjoyed it and they are both great stepping stones.”

The added element of university rugby has really aided the progression of both Fry and Varney. The pair were not selected for the respective pathways at both of their Welsh clubs at U16 level, (Cardiff Blues South and Scarlets West), but they have not let that early disappointment deter them.

In terms of Varney, his own development has sparked into life since the beginning of 2020 after being handed a Gallagher Premiership debut against London Irish and he has also been able to continue his international rugby – for Italy.

Varney - who joins the likes of Negri, Jake Polledri and Callum Braley in representing Italy under the Gloucester/Hartpury umbrella - qualifies for the Azzurri through his mother, Valeria, and in the recent U20 Six Nations campaign, the Pembrokeshire born scrum-half claimed the Man of the Match award in a 17-7 win against Wales.

“The Premiership was a great experience too. Training with the likes of Danny Cipriani and Franco Mostert, for me and Harry, they are all great players so learning off them as well as the other nines ahead of me has been good so to be involved with a first team squad this season was special.”

For now, close friends Fry and Varney will not be continuing their development together due to the lockdown restrictions, but when they fully return to Hartpury, they will be keen to maintain their progression at an institution which lives and breathes its rugby.