Saracens cruise to play-off with 41-6 win over Bath 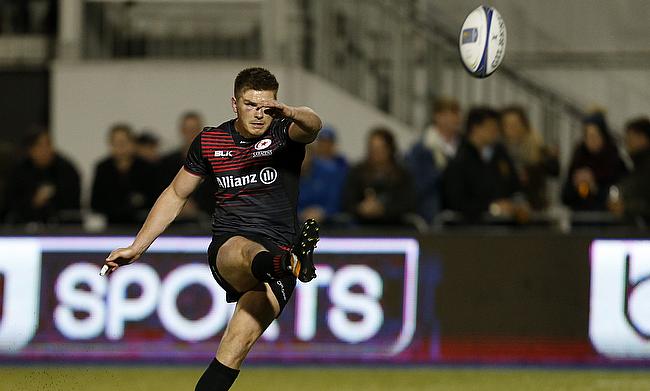 Saracens came up with a six-try performance as they sealed a 41-6 bonus point victory over Bath Rugby at Allianz Park to reach the play-off in the ongoing season of Aviva Premiership.

The win has widened the gap between Saracens and third-placed Wasps to six points as they book a berth in the semi-final while Bath are struggling at the eighth position.

Mark McCall's side will be now looking to seal a home semi-final spot by winning one out of the remaining two fixtures having entered the play-off for the ninth successive time.

The Sarries showed total domination in the first quarter with hooker Schalk Brits and fullback Liam Williams scoring tries in the 14th and the 20th minute with Owen Farrell kicking a conversion to take them to a 12-0 lead.

Even though a double penalty kick from Rhys Priestland kept Bath in the game, Farrell with his first three-pointer at the stroke of half-time ensured Saracens headed into the break with a 15-6 lead.

Any chance of a comeback for Bath was put off by back to back tries from scrum-half Richard Wigglesworth in the 44th minute followed by a converted try from Farrell as the scoreline became 29-6.

With the visitors failing to add a point in the second half, further touchdowns from Schalk Burger (72') and Ben Spencer (78') sealed a 41-6 win for Saracens.

"It was important today that we backed up last week's performance with another half-decent performance, which we did," McCall said.

"I think this year, more than some of the last couple of years, we haven't always had that consistency of performance from week to week - we've had some really high level performances but not always backed it up."