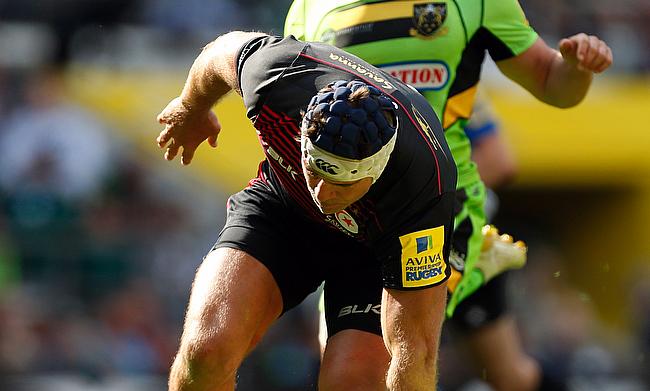 Schalk Brits scored a first half try for Saracens
©PA

A dominant second-half performance from Saracens saw them trounce Northampton Saints 13-63 as they keep their hope of a top-two finish alive in the ongoing season of Aviva Premiership.

The first half was even with the two teams separated by just two points but with Northampton Saints failing to add a single point in the second half, Mark McCall's men ran a seven-try riot after the break to complete an emphatic victory.

The win has taken Saracens to 62 points and they now trail table leaders Exeter Chiefs by just three points while Northampton Saints languish at the 10th position.

Centre Alex Lozowski scored the opening try in the ninth minute after he was set up by winger Sean Maitland while Owen Farrell slotted the conversion to make it 0-7. Stephen Myler, who is set to leave the Saints at the end of the season slotted the first points for the hosts with a penalty but his efforts were negated by a three-pointer from Farrell.

A Reece Marshall try in the 26th minute reduced Northampton's trail to two points while Myler's conversion and a penalty goal put them into a three-point lead before Schalk Brits with his 34th minute crossover ensured Saracens went into the break with a 13-15 lead.

The second half started with Ben Spencer scoring an early try, that was awarded after consulting with a TMO. As the Saints failed to show any resilience, Liam Williams (57'), Chris Wyles (60'), Maitland (63'), Jackson Wray (68') and Nathan Earle (78') all scored tries with Farrell too contributing with 13 points in the second half as Saracens completed a 13-63 bonus point victory.